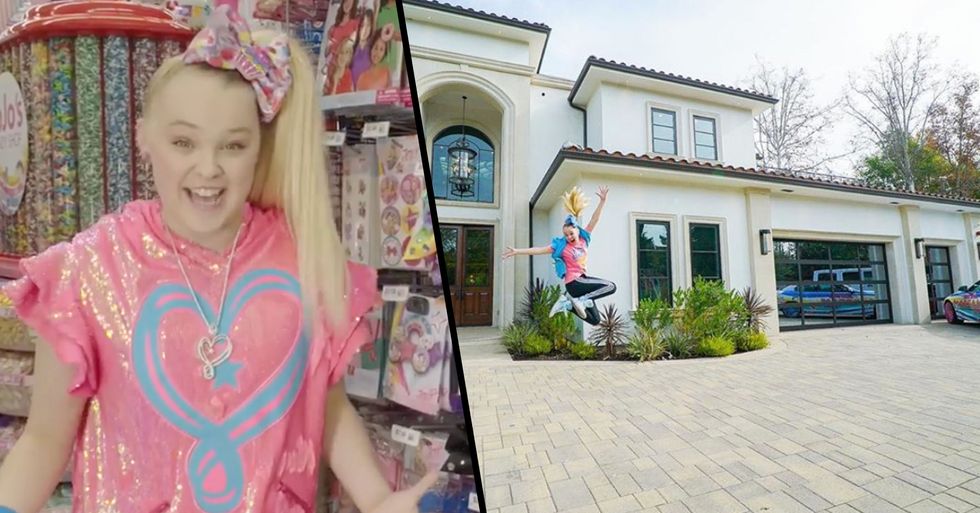 Jojo Siwa Bought a Huge New Mansion and It's Insane

YouTube teen sensation JoJo Siwa recently revealed that she's moved into her very own mansion, with her mom of course. The sixteen-year-old took us on an energetic tour of her new, not-so-humble abode which is on the way to becoming her dream home. Jealous? Yeah, we are too.

Keep scrolling to see the full video tour of her amazing, new mansion, but I must warn all headphone users... this one's going to be a loud one.

This is JoJo Siwa.

She has quickly risen to fame.

Jojo now has 10.5 million followers on her channel and her videos get millions of views every day.

But she wasn't always a YouTuber...

Jojo has an extensive list of qualifications that has made her who she is today. She was a dance instructor on the show Dance Moms, which shone a spotlight on her for her energetic ways of coaching.

And she's also a singer.

Her most popular tracks include "Boomerang" and "Kid in a Candy Store". She is currently on a global tour with over fifty dates. Can you imagine how popular this teen must be if her tours are outselling other music artists?

And just to give us a little hint of how much dollar she really makes...

She posted a video to her channel welcoming her fans into her new mansion. That's right. A mansion. You can see all the full video of the inside at the bottom.

Let me take you through the rooms...

Prepare to be mind-blown.

In true Jojo Siwa fashion, she bursts on the screen with energy.

"Hey everyone!" She chimes, before spinning around and telling everyone she's ready to introduce the home she just moved into 3 days ago.

As you can see from these stills...

But I would be excited if I just moved into a mansion...

She walks into the open entrance of the house where there is a grand piano sitting comfortably on the marble floor.

She's decorated the area with her most iconic outfits...

And you would think these would be some of her stage outfits, but they're just ones she seems to wear on a daily. Classic Jojo.

And then we move into the first kitchen...

Sugar-induced snacks decorate the counter as she takes us through this first kitchen area. Are those Nerds I see there? Who doesn't love Nerds?

And obviously, she has an interesting choice of seating...

It would be too boring for Jojo to have normal bar stools or high-chairs, so she's opted for a bunch of these spinning-tops for a more interesting way to take a break.

And why wouldn't you want to have your own brands on display, right?

Jojo's line of nutritional juices are stacked on her shelves. Each drink usually comes with a treat, like a signature hair bow or a fridge magnet.

I'm sure she's got a few of those laying around her house too...

But hey, if I had my own line of food merch, I'd make sure I stack up on that goodness too.

And if that one kitchen wasn't enough, this is the second one.

Some of us could only dream of owning such an elaborate kitchen. Isn't it gorgeous? The plates wouldn't really be my kind of thing, but it fits Jojo's personality perfectly.

And of course, she just had to show us her secret hiding place...

Which is not a secret anymore because 10.5 million people now know about it.

And if you want to know just how successful this teen really is, check this out.

This entire room is dedicated to all the march she has.

Yeah, I bet you thought it all ended at the juice, but that was just the tip of the iceberg.

She has stuffed toy unicorns and games, hair bows, props and much, much more. So if you're a Jojo Siwa fan, then she's got you sorted with that merch!

And then she moved onto the other rooms...

This one is perfect for socializing with your friends.

And for once, a normal table setting?

Yes, sometimes even Jojo Siwa is impartial to a good ol' dinner party.

And now we've been taken outside...

And straight onto a basketball court.

And would it really be a mansion without a pool or a balcony?

No, so obviously Jojo had to make sure she had those 2 things there, for sure.

And another lounge area...

If one game room wasn't enough, we now have another one but outside for those warm, summer nights. Perfection.

And that brings us to the end of the tour.

This 3.5 million dollar mansion seems like it would be the perfect place to live and Jojo's done it up pretty well. The tour video has already been viewed over 3 million times, so without further ado...

And if you want to read more YouTube-related news, keep scrolling to hear about the shocking news NikkieTutorials told the world.