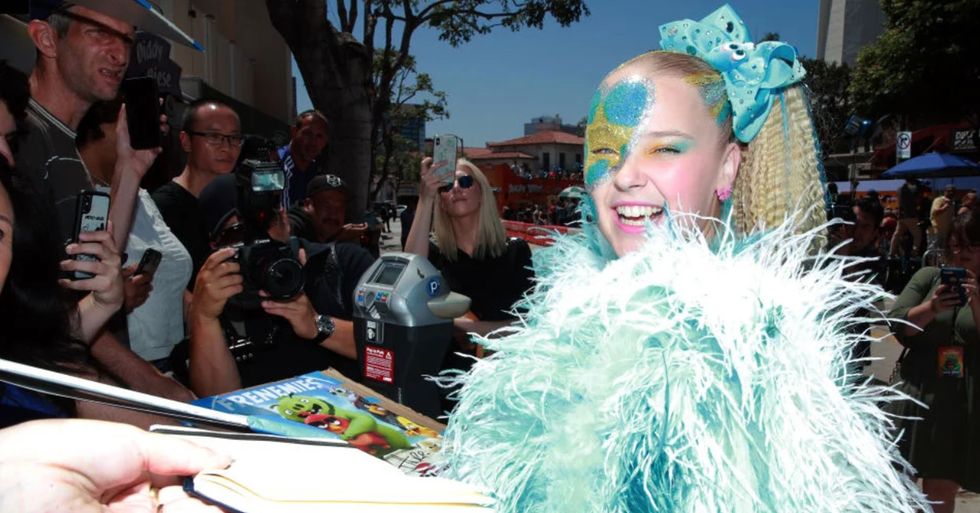 JoJo Siwa has finally agreed to let beauty guru James Charles give her a makeover, and she ends up looking unrecognizable.

Keep on reading to check out her incredible transformation...

And at just seventeen-years-old, the star has garnered an impressive young fanbase.

She quickly rose to fame.

But she wasn't always a YouTuber...

Jojo has an extensive list of accolades that have made her who she is today.

Her time in the spotlight began on a very popular TV show.

You guessed it... Dance Moms.

The star made her first appearance on Abby Lee Miller's show back in its 4th season.

The show, which has skyrocketed the likes of Maddy Ziegler to fame, saw us introduced to the energetic and bubbly Jojo - and she certainly made an impact.

But it wasn't long before she found a second act...

Not only did she become a huge social media celebrity, but she also found fame as a singer.

Her most popular tracks include "Boomerang" and "Kid in a Candy Store."

Her music fame has even seen her tour the globe. Can you imagine how popular this teen must be if her tours are outselling other music artists?

And just to give us a little hint of how much dollar she really makes...

She even owns her own mansion.

The star released her own line of bows which has proven extremely popular among her fans.

The teen superstar often dons extremely colorful outfits along with her trademark side ponytail and bow.

And not forgetting that glitter!

But in more recent times, it seems that JoJo has gone for a little change in style...

And she went to none other than the infamous James Charles for help!

And the beauty blogger admitted that it has taken him 2 years to convince JoJo to take part in a makeover... so this is a pretty big deal!

JoJo arrived at the makeover wearing a full face of her very own makeup...

But it didn't take long for James to get himself blank canvas to work with.

As James worked, the pair began discussing JoJo’s career and her success in the business world...

A conversation which led to James questioning how people could make fun of JoJo when she’d achieved so much. "Because I’m a giant toddler and I have a receding hairline. I would make fun of me too," she joked light-heartedly.

James went on to contour JoJo's skin, fill in her brows, and then apply eyeshadow and eyeliner...

He makes it look super easy, we must say!

Of course, a James Charles makeover wouldn't be complete without false eyelashes!

When JoJo had the lashes on, she said her eyes "felt heavy" but added, "They look pretty."

James took JoJo off-camera to style her hair before revealing her transformation...

And it's safe to say that fans were left completely gobsmacked by her new appearance.

@jamescharles @itsjojosiwa Your a pretty young lady, and your have come a long way the both of you!! You did a great job james
— Elizabeth Francis (@Elizabeth Francis)1598051084.0

How stunning does she look?!

After the revelation, JoJo spoke about how she felt about her new look.

thank you @itsjojosiwa for trusting me with your first ever full glam transformation 🎀 I hope you realize how beaut… https://t.co/ZXbAjj6zJd
— James Charles (@James Charles)1598043775.0

"I will say, it’s very pretty and you did a wonderful job on the hair and on the makeup, you really did. The makeup is stunning… obviously, it’s not me, I mean you know how I showed up here, in sparkles and bright pink and neon and rainbow, but it is really pretty and you did an incredible job," she said to James. "If it was on any other human I’d be like: ‘That human is the most stunning person in the whole wide world'."

JoJo gave James a makeover of her own!

You can check out JoJo's full makeover here...

And make sure to keep on reading to read about the time Kylie Jenner got a drastic makeover that shocked her fans...