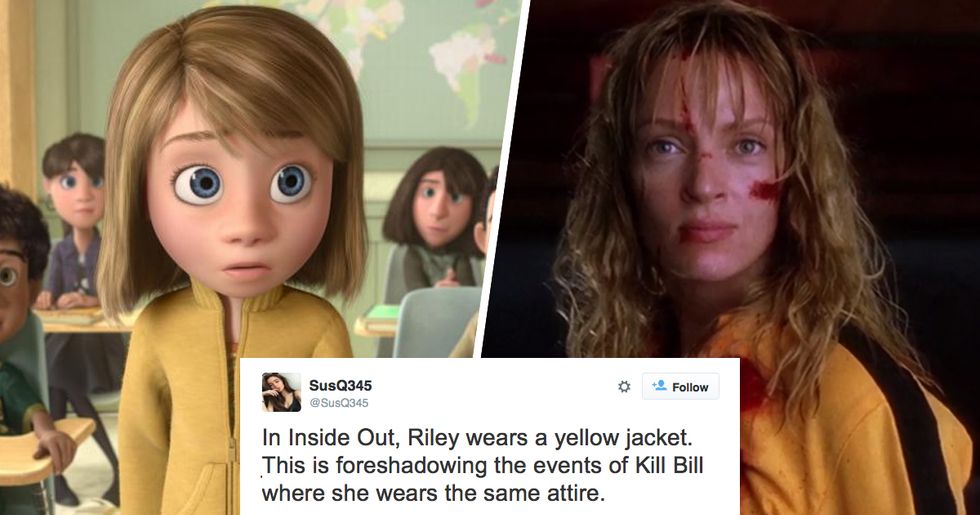 We love finding a good movie detail after watching our favorite movie for the 100th time — who could forget the first time they noticed that the Joker was reading from a prepared script during his phone call into the news show in The Dark Knight; or when they finally started catching all the little hints about what was really going on with Brad Pitt in Fight Club; or when they realized that of course Leia wouldn't give Chewy a medal in the first Star Wars, because, as an animal, he is without question Luke's and Hans' lesser?

But some movie details are less interesting, and more... stupid. Think of the stupidest movie detail you can. Okay, now go even stupider. That's the level of stupid movie details we'll be dealing with today. Reddit's /r/Sh*ttyMovieDetails/ subreddit lists some out-of-this-world-level dumb movie details.

Thankfully, though, they're so dumb they're guaranteed to make you laugh. Here are some of the funniest dumb movie details.

In Game of Thrones Season 8, Daenerys’ last words are “we break the wheel together" which spelled backwards says “rehtegot leehw eht kaerb ew" which doesn’t make sense just like the rest of season 8. - ostlert

In the Sonic The Hedgehog movie trailer you can see 22 coins instead of stars in the Paramount logo. This is a subtle nod to the fact that this movie will make 22 USD at the box office. - andresrinky

Actors in black and white movies were often putting their lives in danger during driving scenes, as they weren't able to tell if the traffic light was red or green. - tommystjohnny

"Is something different about you, Rhoady?"

In Avengers: Endgame, Rhodes admits to Nebula he “wasn’t always like this", which is true. - random_guy_somewhere

And the receipt says "no returns."

In The Dark Knight, Bruce Wayne goes on a lengthy murder spree. This is a subtle nod to the fact I bought the wrong Christian Bale film. - SandIsCourse

In Cap's defense, you can defeat most things by choking them.

In Avengers: Age of Ultron, Captain America attempts to choke Ultron. This is because he is from the 1930s and doesn’t understand what a robot is. - ARK_133

In 127 hours (2010) James Franco is seen cutting off his arm to free himself from a boulder although in real life James kept his arm. This is because James Franco is a coward who can't commit to a role. - JayMan505

Didn't notice this before.

After all, he is the Chosen One.

In the Harry Potter film series, the titles all include “Harry Potter" this is a subtle nod to the name of Harry Potter, the main character of the series. - xDhezz

Poor guy got screwed by causality.

Actor Finn Wolfhard was not considered for a role in the 1990 screen adaptation of Stephen Kings It due this his being born in 2002 and the constraints imposed by a linear understanding of time. - SleepyGary5

Can someone please help me?

In Captain America: The First Avenger (2011), there is a scene where-- oh, my contact lens fell out. I can’t see anything. - yatticus

In Spider-Man Far From Home, Peter likes MJ, possibly suggesting that he is heterosexual. - Awlatif10

They must've had a great time on set.

During the filming of Attack Of The Clones, Natalie Portman and Hayden Christensen, in their scenes together, played a prank on George Lucas by pretending they had never acted before. Lucas loved the prank so much, he ended up using most of the footage in the final cut. - genetics74

We need to stop watching movies late at night.

Despite being advertised as a full-length movie, Martin Scorsese’s Gangs of New York (2002) was actually a short film only eight minutes long. This is because my ex decided she was too tired to finish the movie and made me turn it off after less than 10 minutes. - ZnSaucier

In John Wick 2 (2017) John Wick never gets shot, because in real life Keanu Reeves can dodge bullets, as evidenced by his earlier film, The Matrix (1999). - DungeonsAndDradis

Mark Zuckerberg is the worst.

Some genius he is.

Spider-Man’s costume is red and blue, because Peter Parker has no idea what color spiders are. - random_guy_somewhere

It would be so boss to talk to your pet.

In Harry Potter and the Sorcerer's Stone, we see that Harry gets an owl named Hedwig despite having the ability to literally talk to snakes. This is due to the fact that he is a stupid idiot. - ItsLeviosaaaaahhhhhh

It is crazy when you think about it.

In Spider-Man; Far From Home (2018) Peter Parker yells the phrase “what the f--." This has nothing to do with Sony or Disney, but is in fact my reaction to the Amazon rainforest fires that have been destroying the world’s most ecologically important areas. - Rickmundo

"I like it when they say the name of the movie in the movie!"

Could be any one of them, really.

In San Andreas, Dwayne Johnson survives using nothing but his muscles and charm. Or maybe this is from Skyscraper? Could be Hobbes & Shaw? Not really sure to be honest. - random_guy_somewhere

In the hit movie Phineas and Ferb, director Dan Povenmire made the controversial choice to release the movie weekly in 20 minute parts. This inspired many other movies to do the same, creating what we now call “shows." - KRL692

In Inside Out (2015), Riley wears a yellow jacket. This is foreshadowing the events of Kill Bill
where she wears the same attire. - M1chael2468

So glad Sony gave him have Tom Holland's number.

The iconic climax of Avengers: Endgame came about when Robert Downey Jr. improvised and called every actor on his phone contacts list to the set. - YoungDumbass

I would legitimately love this crossover.

A swing and a miss.

Will Smith is a Libra. He is completely miscast for the title role of Gemini Man. - random_guy_somewhere