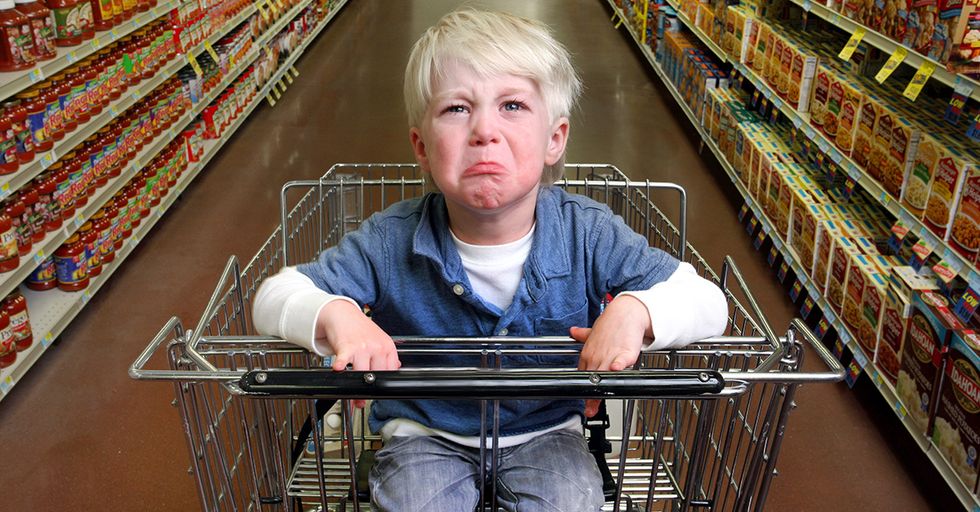 If you are a parent of a small child, or a medium-sized child, or even a large, old child, grocery shopping with them in tow can be harrowing. If they are in a good mood, they constantly ask you if they can get candy and junk food and toys.

If they are in a bad mood, though, they scream that you are a monster for not buying them candy and junk food and toys, and they run through the aisles knocking into people and throwing things off the shelves. They ask inappropriate questions about fellow patrons while they are definitely within earshot. They throw temper tantrums on the floor of the frozen foods aisle because it's too cold there, but they won't listen to you when you tell them they would feel better if they just moved to the baking aisle.

Grocery shopping with children should be an Olympic sport. Only the most talented of parents can withstand the task without needing a very large drink when they return home.

If you're a parent who's ever taken your kids to the grocery store, you probably recognize this feeling:

If only this was a socially acceptable thing to do. But alas, it's not. That's why parents everywhere are tweeting instead.

Sometimes, having food to eat isn't even worth the headache of shopping with kids. Starving can't be too bad, can it?

I don't know why kids hate the grocery store so much. It's full of food. Food is the best.

me [giving a press conference after taking the kids to the grocery store] I don't know what the hell happened in there. That was ridiculous
— Josh (@Josh)1491865902.0

Every parent will understand this. They can't be held responsible for anything they do while they're in the grocery store.

The loudest sound on Earth is my child asking an inappropriate question about another customer at the grocery store.
— MyMomologue (@MyMomologue)1522336034.0

It's so true. Do you recognize this: "Mama, why does that man have so many wrinkles on his face and no hair?"?

If hell exists, it's probably just grocery shopping with a cranky toddler for all of eternity.
— Ramblin Mama (@Ramblin Mama)1478109643.0

Even if you aren't a parent, you can probably imagine how terrible this is. You were probably that cranky toddler at one point.

What is it with kids and grabbing random things off the shelves constantly? They're like little kleptos.

This would be an amazing experiment, but then you would definitely end up at home with eight cartons of ice cream, a giant block of cheese, and every potato chip variety.

Guys, do you know how hard it is to clean raw eggs off of a tile floor? Spoiler alert: It's very hard.

Kids begged me to let them do self check out at the grocery store & I'm pretty sure our milk will expire before we finish this adventure.
— Domestic Goddess (@Domestic Goddess)1499451563.0

Here's a hint: If kids want to use the self check-out, make sure you have like, at least three days free. Because that's how long it's going to take.

Here's to pizza- bc who wants to cook all this healthy food after grocery shopping with babies #momlife #parentlife… https://t.co/ENxyCJJhhq
— Becca Forrest (@Becca Forrest)1485317172.0

Sometimes I don't have the energy to cook after I go grocery shopping, and I don't even have kids.

I don't know what happens to perfectly normal, happy kids when they enter a grocery store, but it's a like a black hole of bad behavior.

Moms need to seriously psych themselves up for trips to the grocery store with the kids. Coffee is key.

Fun fact: Toddlers who have only had half a nap are completely psychotic and should not be taken on outings to the grocery store.
— Unfiltered Mama (@Unfiltered Mama)1493594670.0

PSA: Half a nap is not enough. In fact, half a nap might be worse than no nap at all.

Here is some new for the totally dense: When sometimes repeats that "everything's fine," everything is not fine.

There are people out there with real gluten intolerances and allergies, but if it just makes a kid sleepy, load him up!

So The Fast and the Furious isn't about grocery shopping with your toddler?
— Meredith (@Meredith)1462206553.0

Oh, but it totally is! Have you seen it? Vin Diesel is just a giant toddler who whines about family the whole time.

I love it when my kid loudly asks me things like “why is your butt shaking?” while we’re grocery shopping. Awesome, kiddo!
— MotherPlaylist (@MotherPlaylist)1516214896.0

For some reason, grocery trips seem to give kids the superpower of pointing out everything that's wrong with every adult around them.

I wonder how she discovered this. (It's definitely because her toddler was walking backward through the grocery store.)

Um, I am mad that this even happens. If you have four kids, there better be at least two adults present for the grocery trip.

"I have to go potty"

The words "I have to go potty" are the last thing I want to hear from my 2yr old as we wait in the checkout line at the grocery store.
— Jennifer Borget (@Jennifer Borget)1361841296.0

The second these words come out of their mouth, a countdown clock has started. It immediately becomes a race to the nearest restroom.

They have no idea how delicious you are going to make those things with your amazing cooking skills.

Lazy? No way. This is totally genius. Kids love free samples. It's the best thing about the grocery store hands down.

Oh, you think kids grow out of being total monsters at the grocery store with their parents? Think again.

The advice I'd give five-year-old me is forget the bogeyman, plan and prepare yourself for surviving grocery shopping trips with kids.
— Mike Reynolds (@Mike Reynolds)1488123788.0

The Babadook is hardly as scary as trying to peacefully remove a screaming child from the seat of a shopping cart.

Sometimes it's too hard to find your own terrible kids because everyone else's kids are also being terrible.

Here's the thing though: If you prep for doomsday, then you're more likely to survive it. The silver lining, right?

Wow, that really is a vacation. Share this with a parent who knows the struggle!