Jokes for Anyone Who Really Hates the Gym | 22 Words 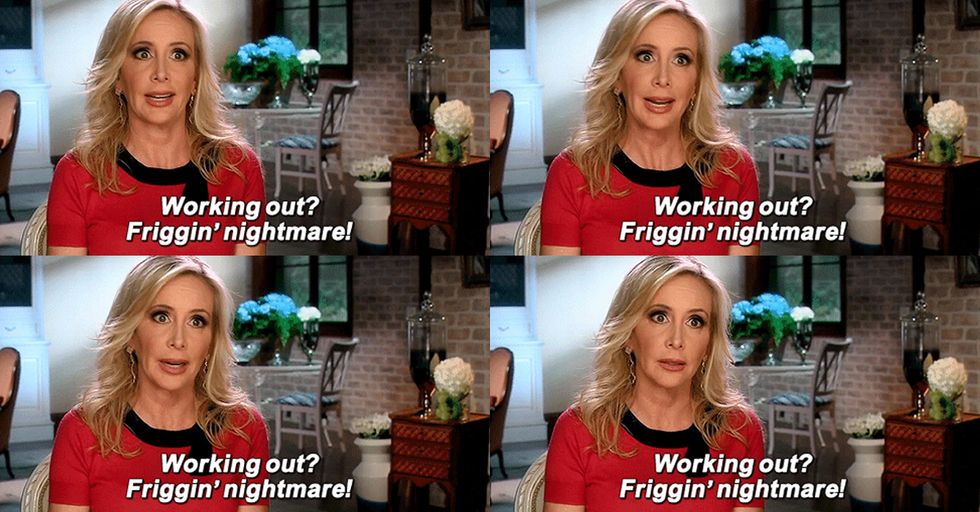 Jokes for Anyone Who Really Hates the Gym

Let's face it; the gym is the worst. People who say they love the gym are really just lying to themselves. If you actually like exercising, which (while insane) is not out of the realm of possibility, exercising in a gym is the worst place to do it. There are too many gym rules and workout politics and weird courtesies. Not to mention, the other sweaty people and complicated machines and the bad smells.

Exercising can be nice if you get to do it outside for five minutes tops, and then you stop to get ice cream. That is pretty much the extent of it. If you hate the gym with a fiery passion, if your blood boils at the thought of putting on workout clothes for a purpose other than lounging on your couch and watching movies, then this is the gallery of jokes for you.

If you have a choice between going to the gym and doing nothing and you are like, "What? Is that even a question? Obviously, doing nothing," then these are the jokes for you.

I love this. You don't even know the gym well enough to call it "gym." It's "James" to you.

I feel this so hard. It's three-quarters really intense pump-up music, and then one-quarter the soundtrack of A Star Is Born.

*walks into starbucks instead of using drive-thru* no one can match my dedication to exercise
— Anne T. Donahue (@Anne T. Donahue)1487519981.0

Wow, I got up and found the remote instead of just sinking so far into the couch that I couldn't hear the infomercial anymore? I deserve a cookie.

I relate very deeply to this statement. And I will tell you this: I may have regretted eating that many cookies but never once have I regretted not going to the gym.

If anyone tells you that after a while you get a "high" from exercise or you become "addicted" to it, they are lying.

Not in the plan

Oh my gosh, I have used this excuse many times before! I've also used the "oh, but I already showered today" excuse a lot.

Putting on the sports bra

Often, putting on a sports bra is strenuous enough to count as a whole workout. Those things are tight!

This is what now hear when someone describes themselves to me as being a "gym rat." It's a gross thing to be!

This is the best distillation I have ever read on running. It is fast and awful. And that's that. Walking is much better.

today a cab driver asked me if I ran the New York marathon and I laughed so hard I might as well have
— Matt Bellassai (@Matt Bellassai)1446422132.0

I love this. Laughing is exercise. It's healthy! That's why I consider watching funny movies and TV "exercise."

You cannot work out on a treadmill that is not your favorite. What an absurd proposition!

That's one way to get a work out in! As long as no one else saw you do it (because you looked ridiculous), you're all set.

I won a marathon this week! I marathoned the entire fourth season of Schitt's Creek in one day in record time. I'm so proud of myself.

It doesn't matter how the steps end up on that FitBit, all that matters is that they are there.

Oh, I totally looked for the equipment, but I didn't see anyway. I'll take a Mango Madness, please!

That is super impressive! If I forget something upstairs, that's it! I'll never see it again until the next time I happen to be upstairs for some other reason.

My bank knows me better than I know myself, so this makes total sense. They know that FitBit will end up dead in a drawer in six months.

How often are you going to go to the gym?! This seems reasonable to me.

If you don't exercise for a while, this is sometimes all you can do, and you know what, that's enough!

You say running 10 miles, I say tumbled off the couch while I was trying to reach a popcorn kernel I dropped. Who's to say who's more accurate?

*Taking health risk assessment* HOW OFTEN DO YOU WORK OUT? *remembers being winded putting socks on in the morning* DAILY.
— keith (@keith)1443715021.0

If daily activities make you winded, that means that you're practically exercising all the time! Congratulations!

Love a good hotel gym! Am I going to work out there? Absolutely not! But it looks great!

Jogging to the gym

We all know this guy. The guy who has to let everyone know at all times that he works out and if he's not working out he's thinking about working out. Chill, guy.

How does one even accomplish such a thing? It seems wholly impractical and very uncomfortable. Oh, and it's also the worst in all other ways.

Just cancelled my gym membership and I guarantee it's better than any runner's high
— Brandy Jensen (@Brandy Jensen)1461954500.0

Oh man, no runner's high can compare to that moment you finally stop lying to yourself! That's the good stuff.

I can't really do any exercise that involves sitting or lying down because then it just turns into me sitting and lying down.

Gyms are always really crowded. It's best if you just don't go.

Apparently there's a big difference between exercise and exorcize and now I'm banned from the gym.
— Reverend Scott (@Reverend Scott)1389650233.0

This is better than getting kicked out of the church for doing burpees on the altar. Share with someone who also hates the gym!