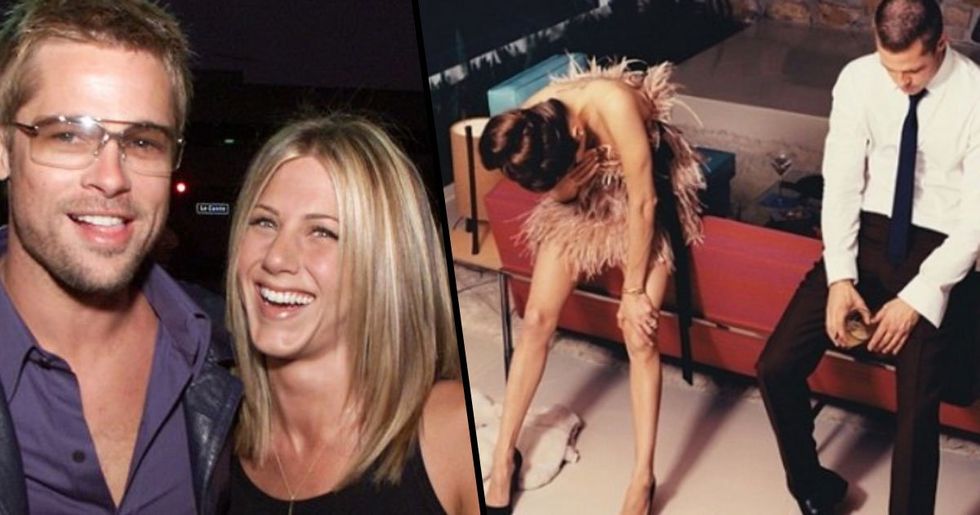 And, now, sources have revealed the moment that things turned sour for the sweethearts - and the Jolie dress which represented the turning point.

The two blonde bombshells were matched in true Hollywood style by their agents in 1998.

Brad, on the other hand, was wrapping up filming Meet Joe Black’ (I don’t remember it either..) and was about to start shooting for Fight Club. The two kept their relationship a secret at first- you know, probably wanting to avoid any public speculation (if only they had known!).

Only three months later, during a Sting concert (of all places), the loved-up kids announced their engagement. Stepping on stage and waving the engagement ring to crowds of applause, it really did seem to be a Hollywood-fairytale.

In an interview given by Aniston in September 2001 with Rolling Stone Magazine, the star talked about being one year into her marriage with Brad and all appeared pretty darn rosy.

Aniston’s love for Brad is apparent throughout the interview, she can’t seem to help but bring him up at any given opportunity - I mean, she’s worse than me when I like someone!

Some two years after the Friends cameo, the cracks start to appear in the fairytale romance of Brad and Jen.

Talking to W Magazine, Aniston was asked if Brad was the love of her life. She responded with an awkward rambling answer that ends with, “He’s certainly a big love in my life..".

It's just that most of us don’t have a load of reporters asking us these big, life-defining, deep questions. Who knows? Maybe all was still good between the two at this point.

So we’ll let that one slide, maybe the two "pothead", Radiohead fans were still very much in the throws of love at this point...

It's May 2004, and "happily" married Brad Pitt starts filming the assassin/spy flick alongside the single (and admittedly.. very beautiful) Angelina Jolie (it’s those darn cheekbones). Anyway blah, blah, blah, the two co-stars spent an awful lot of time together and got on very well.

By January 2005, Aniston and Pitt had announced their separation. In their joint statement, the couple contested the tabloid rumors and insisted that they would remain friends (yeah, yeah…).

Really hits you in the funny bone doesn't it?

Brad went on to adopt Maddox, and a further two children with Jolie - Zahara in 2005 and Pax in 2007. The two also have three biological children together: Shiloh, born in 2006, and twins, Knox and Vivienne, born in 2008.

Relations between the two exes did not stay so civil after their announced separation in 2005.

And now a specific detail about the affair has been revealed.

And from a rather unlikely source, too! On the newest series of Netflix's reality-fashion series, Styling Hollywood, one fashion expert claims to have insight into the real reason that Brad and Jen split.

He's searching for a dress for client, Eve, to wear to the Grammy's - and in his search, he heads to Irene Albright’s fashion library.

While searching for the perfect gown for Eve, he stumbles upon something else.

And he's known for working in one particular medium.

Valli, particularly in the early '00s, loved creating garments out of ostrich feathers. While they aren't the most practical garms, it does give a really unique, luxurious finish.

And it was one of these items that Jolie wore in a spread in W Magazine.

The feature, entitled Domestic Bliss: Angelina Jolie and Brad Pitt at Home, was photographed long before the couple confirmed they were together. In it, the pair were styled as a married couple raising a family.

Albright claims that this shoot had more impact than anyone realized.

“This is what caused the break-up of Jennifer Aniston and Brad Pitt … Angelina Jolie, the W Magazine. Do you remember that spread? … That was the beginning of their affair." He even called the Valli creation, "the affair dress."

This wasn't long before Brad and Jen announced their split in 2005 - which has led to many raised eyebrows about the timeline of Brangelina's relationship.

While Brad and Angelina may have been up to no good at the time of the magazine spread, it does seem a little far-fetched to blame the entire affair (and subsequent breakdown of a marriage) on a simple dress.

Although others have pointed out something else.

It was less than a year after the Brad and Jen split that Brangelina announced their first pregnancy together - which does look a little shady (and perhaps shed some suspicion on that W spread).

Either way, one thing is truly remarkable.

The fact that Jen and Brad have managed to stay friends after everything that they've been through is absolutely incredible - and a real credit to Jen's good-hearted nature. Other Hollywood exes could learn a thing or two! Like, for example, Miley Cyrus and Liam Hemsworth? Read on for the dirty details of their split.