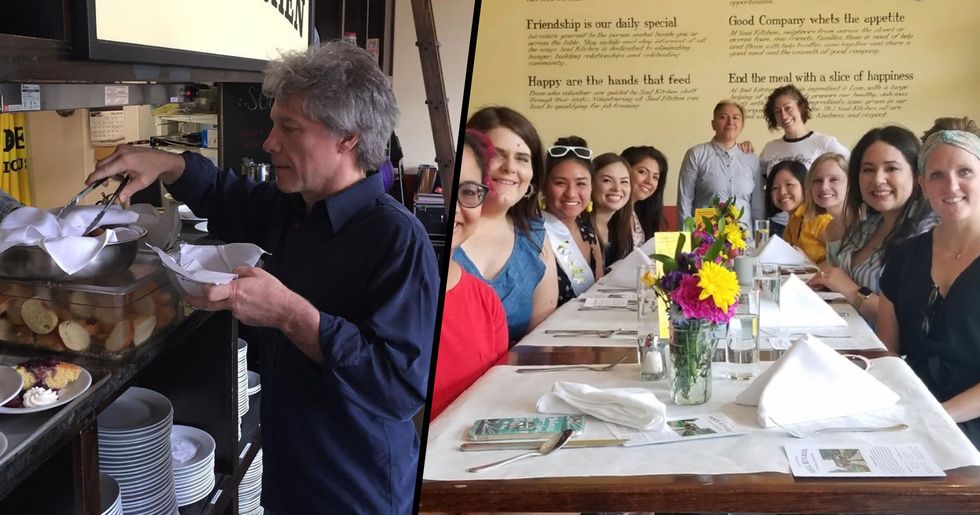 As if you didn't need reminding how much of a nice guy Jon Bon Jovi is, he has only gone and started feeding the hungry.

You probably know him for his leading role in the successful American rock band, Bon Jovi. But when Jon isn't getting stadiums of fans to bellow out "Livin On A Prayer" he's serving up delicious food to those in need in one of his Soul Kitchens.

Continue scrolling to learn about Bon Jovi's latest restaurant scheme, and the huge impact he has had on his New Jersey community. You won't believe the work this man has done...

He believes that it is a human right to be able to eat and to eat well.

Jon Bon Jovi has had an incredible career.

Now the fifty-seven-year-old singer-songwriter wants to dedicate himself to giving back- as well as his music.

Bon Jovi is more than a pretty face...

As a celebrity figure, he has always been passionate about helping those less fortunate, and raising awareness about crises going on across the world.

Jon Bon Jovi married his childhood sweetheart, Dorothea Hurley in a secret Vegas ceremony back in 1989. The pair are still together and have 4 children.

Jon Bon Jovi and his family believe it is important to give back.

Not ones to be misers of their wealth, the Bon Jovi family are very charitable. In 2005, Bon Jovi (the band) donated $1 million to Angel Network foundation and in 2007 Jon Bon Jovi's family rehabilitated a block of 15 homes in North Philadelphia as part of a charitable project.

Jon and Dorothea are incredibly humble.

The New Jersey natives are passionate about sharing their good fortunes with those without. The couple even spent their thanksgiving helping out at one of the JBJ Soul Kitchen community restaurants.

The JBJ Soul Kitchen is so much more than a place for a cheap meal. Jon Bon Jovi's vision is about creating a welcoming environment where people can eat, socialize and build a sense of community and belonging.

There are already two JBJ Soul Kitchen community restaurants, one is in Red Bank, New Jersey and the other in Toms River, New Jersey. The next restaurant will be in Newark, New Jersey.

Jon Bon Jovi wants to help those less fortunate in his home turf.

The state of the world can sometimes feel like a complete mess. Bon Jovi has the right idea... charity starts at home.

No matter how big of a star Jon Bon Jovi became...

He certainly never forgot his roots.

Bon Jovi and the First Responders.

Jon Bon Jovi gives respect where respects due. The singer-songwriter legend hosts an annual chili-cook off with First Responders along with his JBJ Soul Kitchen team.

Spreading the love of charity.

Jon Bon Jovi not only carries out his own charitable projects but recently he's been encouraging others to do the same. - Those that can, of course.

Realizing that Bon Jovi is good friends with Mr. Charitable, Keanu Reeves, it's no surprise that he's so charitable himself.

Bon Jovi also isn't afraid to make his political views known. He has supported and joined the tours of many Democratic politicians.

People know what Bon Jovi's about.

I don't think there's anyone who would disagree that Jon Bon Jovi is a genuinely nice guy.

"Our mission has always been to affect positive change and address the issues of hunger and homelessness."

There are no prices on the food in Bon Jovi's Soul Kitchens. Everything is free, without charge.

On the JBJ Soul Kitchen website, they explain how things work. Basically 51% of the meals they've served so far have been paid for by donations and the other 49% are covered by people carrying out voluntary work in return for food.

The motto for every JBJ Soul Kitchen restaurant is, "All are welcome at our table." I don't know about you but I'd sure like to sit at Bon Jovi's table.

And what an inspiration to the rest of us. Talking of inspirational celebrities, continue scrolling to read all about how Michael Jordan donated $7 million to open health clinics for the uninsured.