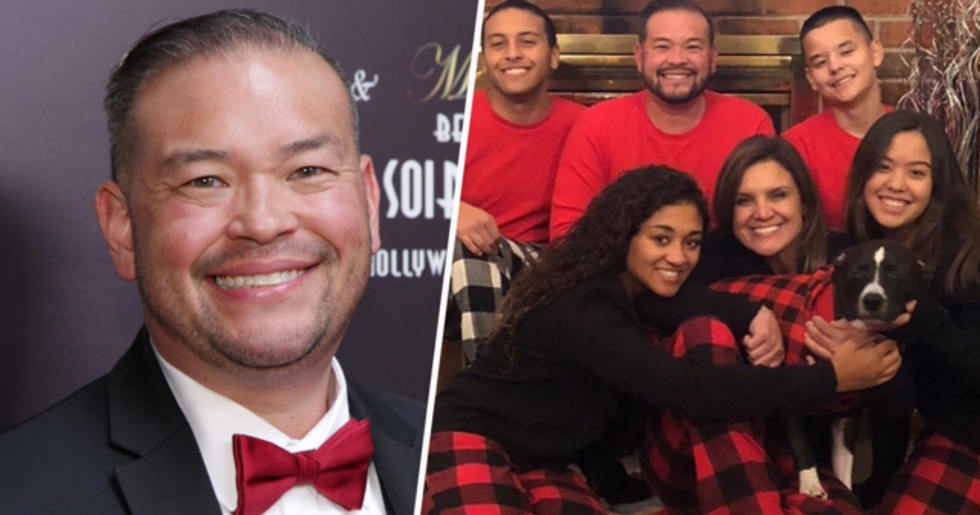 Jon & Kate Plus 8 star, Jon Gosselin, has revealed that 6 of his 8 children no longer speak to him, and he has sent out a heartfelt message in an attempt to rebuild their relationships.

Keep scrolling for the full story, and to hear the heartbreaking reason behind the family's collapse...

It was back in 2005 when Jon Gosselin found his fame.

Upon the birth of their sextuplets, Jon and his now ex-wife, Kate Gosselin, were approached by Discovery Health, who offered the couple a reality series chronicling the lives of their family.

They have 8 children together...

Nineteen-year-old twin daughters, Mady and Cara, who are now in college, as well as sixteen-year-old sextuplets Hannah, Collin, Alexis, Aaden, Joel, and Leah.

And, following on from 2 successful Discovery Health specials on the family...

The couple were signed to their own series, Jon & Kate Plus 8, which followed the day-to-day life under the roof of 8 children.

The show was hugely successful...

And it ran for a staggering eleven seasons, with a record 4.6 million tuning in to the 2009 season 4 finale.

But there was trouble in paradise.

In the 2007 premiere of the show, the laid-back former I.T. specialist and the no-nonsense pediatric nurse were quite clearly unhappy, with the pair constantly arguing and complaining.

And, in 2009, everything was to change forever.

In an episode from the tenth season, it was announced that Jon and Kate would be getting a divorce, and the show was to continue without him, just as Kate Plus 8.

Kate cited some pretty worrying reasons for her divorce.

The mom-of-8 stated that "Jon's activities" left her with "no choice but to file legal procedures in order to protect" herself and the children. "I have always done everything I can to protect our family."

Over the years, many precarious stories have emerged about Jon's behavior.

First, it was that Jon, then thirty-one, was partying with college co-eds a few hours away from the pair's new $1.3 million five-bedroom Berks County, Pennsylvania mansion. Then, Us Weekly alleged that he was having an affair with a grade-school teacher.

But Jon has always insisted that their marriage was doomed from the start.

Opening up on The Dr. Oz Show in November, he said, "I think eventually, because of personality, it would have fizzled out anyway."

A vicious custody battle broke out following on from their highly publicized divorce...

In 2009, People reported that Jon had filed legal action against TLC to prevent the show from resuming and would consider the entry of production crews into the family home as "criminal trespassing."

And, to this day, he and Kate don't speak.

"We don't have a relationship right now," Jon said on his appearance on Dr. Oz. "We don't talk, nothing. It's very nothing. The only time I see my ex-wife is in court because we have exhausted all opportunities to co-parent. It's just never going to happen."

The brutal divorce has taken a toll on the family...

And, sadly, it has affected Jon's relationships with his own children.

In a recent interview, the reality star admitted that he has lost his relationships with 6 of his children.

Speaking to Entertainment Tonight, Jon opened up about the damage his divorce and relationship antics have had on his children.

Currently, two of the Gosselin's sixteen-year-old sextuplets, Hannah and Collin, live with Jon...

While the remaining 6 children, who refuse to speak to their dad, live with Kate.

And, now, Jon has appealed to his 6 children to come forward.

"My wish is that all my kids would just be together, like, hang out together," he candidly shared. "Kate and I don't live that far away from each other and I feel like there's an invisible wall."

"They should just be able to just get together. I mean, I have no qualms about it. If they wanna go meet each other, just go ahead. But I feel like it's more on the other side."

Jon admitted that, sometimes, he runs into his kids in the street...

But, even then, they won't talk, but instead, awkwardly wave at one another.

He blames Kate's presence for not speaking to them.

"If they're with their mother, I don't want to upset the balance… And it's not my place to intervene. It's up to them," he shared. "You don't wanna make it uncomfortable for the child. So, I just go about it… And I'm comfortable with it myself."

He then made an open plea to any of his children who may have been listening.

"Leah, Aaden, Joel, and Alexis, I love you. You're welcome to come over, call Hannah, Collin," Jon pleaded. "I don't know what's holding you up. I don't know what the ill will is, but if you watch or don't watch or see it on the internet, I love you, happy birthday."

"Sorry I have to go through media channels. I know no one likes that or whatever, but it's kinda hard to reach out to you. But anyway, good luck and hopefully you call, or call Hannah, and you can walk to my house. It's all good." Let's hope that the family can put their past behind them and move forward together. For more on the crazy world of reality TV, keep scrolling to read more about the most iconic reality shows from the past... Did your favorite make the cut?