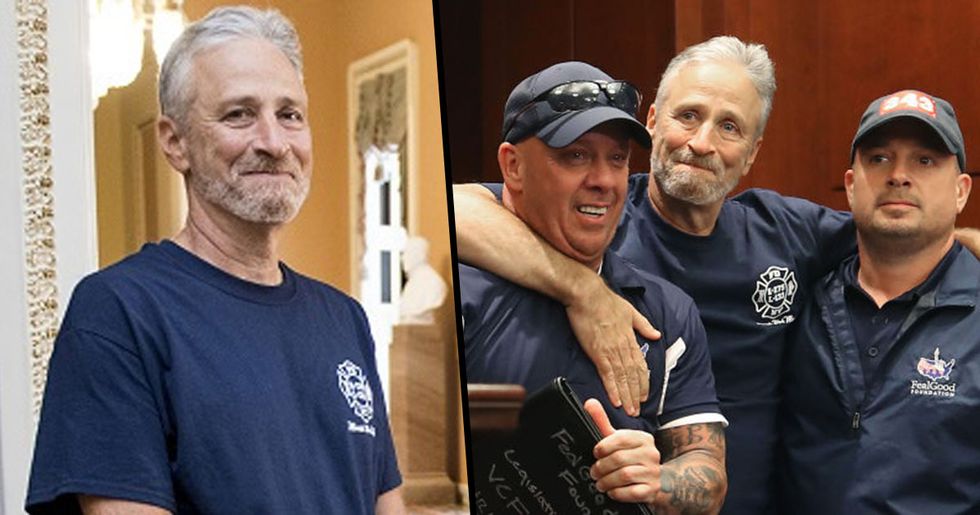 Jon Stewart has been making headlines of late for his tireless campaigning for health care benefits for the 9/11 first responders.

Thousands of emergency workers who attended the scene of the devastating September 11th terror attacks have not been receiving the correct or appropriate medical care, with many of them struggling to fund the costly treatments for diseases and illnesses caused by the toxic fumes breathed in at Ground Zero.

Last month, The Daily Show star publicly slammed Congress in an emotional speech that went viral. Jon demanded that the 9/11 victim fund be replenished and insisted that a long-term compensation package for the 9/11 first responders should be distributed.

And, finally, our government has seen sense and authorized the 9/11 First Responders Bill. Jon, whose tireless efforts have finally paid off, was visibly ecstatic with the news and gave an emotional and heartwarming speech regarding the good news.

Finally, our heroes can get the justice that they deserve.

The 9/11 first responders have been cheated.

It is believed that up to 80,000 people – including police officers, firefighters, and emergency workers – rushed to the aid of the victims in the immediate aftermath of the 9/11 terror attacks in New York. However, those at the scene of the attacks breathed in pulverized dust that included many toxic elements, such as lead, concrete, asbestos, and other harmful chemicals after the towers collapsed.

Thousands have since passed away.

As of September 2018, more than 2,000 of the courageous men and women who assisted at the scene of the attacks have passed away as a result of 9/11 related illnesses. And it is estimated that, by the end of this year, more people will have died from the toxic exposures breathed in at the aftermath than they did in the actual attacks

They have had to fight for their right to health care.

In the years following the attacks, a staggering number of first-responders started developing deadly illnesses such as cancers and respiratory diseases, all primarily caused by the toxic fumes and chemicals emitted from the burning wreckage.

The 9/11 Victim Compensation Fund was set up.

But the funds were quickly slashed after just 2 years. Many thought that the battle was won years later in 2015 after The Zadroga Act was passed to provide medical support for responders. However, the fight moved on into 2019, as the U.S. government again slashed the medical funding in half.

Jon Stewart became a prominent figure for the 9/11 victims and their families.

The 9/11 first responders receiving adequate health care became a passion of Jon's, and he would regularly use his platform on The Daily Show to expose these political issues. In 2010, Stewart invited four 9/11 first responders onto the show for a panel discussion and, in doing this, he instantly made the bill a public concern. Three days after the segment, the bill was passed.

He has become the voice for the thousands of cheated men and women.

Last month, Jon's emotional plea to Congress stirred up both emotion and disgust across the nation. It brought up many unanswered questions: How have our heroes been neglected for this long? Why was Jon talking to a nearly-empty Congress board? And, most importantly, why are there still people dying at the hands of our health-care system?

Jon stood before Congress in a fight to get the first responders the justice that they deserve.

And standing defiantly alongside Stewart was retired NYPD bomb disposal detective, Luis Alvarez who, despite his declining health, publicly campaigned alongside Jon to get the fund replenished.

Alvarez, who was suffering from an advanced-stage colorectal cancer diagnosis caused by the toxins breathed in at Ground Zero, sadly passed away, aged only fifty-three. The retired cop spent his final weeks fighting for justice for himself and the thousands of other emergency workers affected by the attacks.

Jon was pictured at his funeral.

Emotional photos emerged of Jon saluting Alvarez's passing casket, and they served as a poignant reminder of the severity of this issue.

And now, just a few weeks following Luis' death, justice has been served.

The Senate reportedly voted 97-2 to pass the healthcare bill, which will extend coverage for surviving first responders for decades to come. President Donald Trump is expected to sign the bill when it arrives on his desk. Sen. Rand Paul R-Kentucky and Sen. Mike Lee, a Utah Republican, were the only senators to vote against the bill.

The first responders will finally have access to the health care that they deserve.

The new bill, which now includes Alvarez's name, will extend the expiration date through 2090 and will cost what is deemed necessary. The Congressional Budget Office estimates that it will cost about $10 billion over the next decade.

And Jon couldn't be happier.

Jon was pictured hugging and beaming with other campaigners and first responders, and made a touching speech shortly after the announcement.

He made an emotional announcement.

“I will always be so proud to have been associated with it. We can never repay all that the 9/11 community has done for our country, but we can stop penalizing them." Stewart said, "And today is that day that they can exhale. Because, unfortunately, the pain and suffering of what these heroes continue to go through are going to continue. There have been too many funerals, too many hospices." He concluded, “These families deserve better. I’m hopeful that today begins the process of being able to heal without the burden of having to advocate."

And the best part of it all?

A photo has expertly captured the awkward moment that Senate Majority Leader Mitch McConnell passed a smiling Jon inside the U.S. Capitol before the vote to extend the September 11th Victim Compensation Fund.

The former Daily Show host railed against McConnell for always waiting until the “very last minute" to offer relief to those who showed up at Ground Zero eighteen years ago, and always “under intense lobbying and public shaming." McConnell later responded by saying that Stewart was “bent out of shape," adding, "We've never failed to address this issue and we will address it again." In response, Stewart urged McConnell to meet right away with 9/11 survivors and to not “make them beg."

People are relishing over the photo, which has since gone viral.

The photo has become a symbol of victory.

And it is a representation of the fight from Jon and all of the other first responders and their families to get justice.

People are thanking Jon for his tireless efforts.

Because, without Jon bringing the issue into the spotlight, we may not be where we are today.

He truly is a national hero.

Jon Stewart has selflessly dedicated the last ten years of his life to this cause, and his passion and tireless efforts have finally paid off.