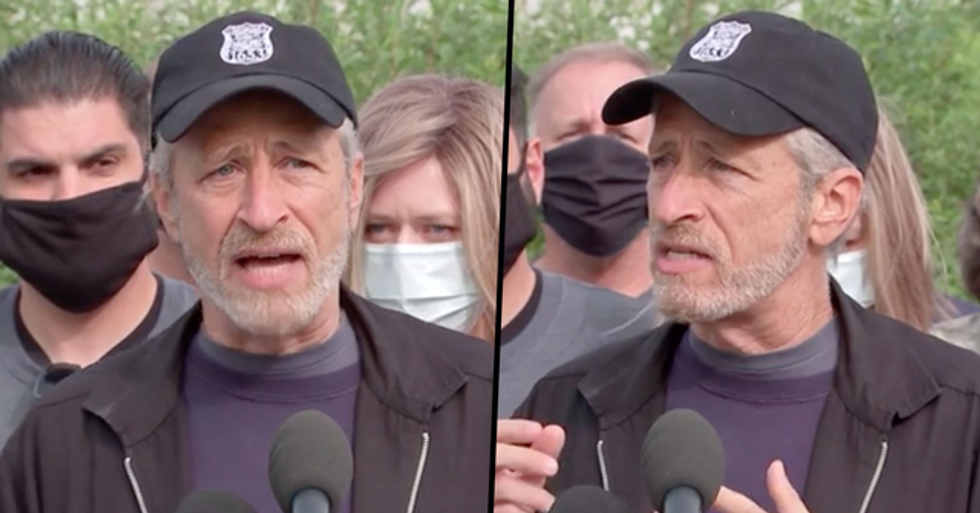 This week, former The Daily Show host, Jon Stewart lobbied Congress on behalf of all the veterans whose health has been harmed by exposure to toxic burn pits...

He isn't known as the man of the people for nothing, is he?

In recent years, the comedian has been taking a stand for all the emergency workers affected in the aftermath of the tragic 9/11 terror attacks.

And now, his sights have turned to our veterans.

This week, Stewart has been condemning lawmakers for not granting broad care and benefits to veterans sickened by burn pits and toxic chemicals during overseas wars.

On Tuesday, Stewart made a compelling speech at the U.S Capitol...

Where he slammed the government for "failing" our veterans.

Now, this isn't the first time Stewart has taken a stand for those in need.

In the last couple of years, the comedian has become a prominent figure for the 9/11 victims and their families.

And he would regularly use his platform on The Daily Show to expose these issues. In 2010, Stewart invited four 9/11 first responders onto the show for a panel discussion and, in doing this, he instantly made the bill a public concern. 3 days after the segment, the bill was passed.

He became the voice for the thousands of cheated men and women.

Last year, Jon's emotional plea to Congress stirred up both emotion and disgust across the nation. It brought up many unanswered questions: How have our heroes been neglected for this long? Why was Jon talking to a nearly-empty Congress board? And, most importantly, why are there still people dying at the hands of our health-care system?

Jon stood before Congress in a fight to get the first responders the justice that they deserve.

And standing defiantly alongside Stewart was retired NYPD bomb disposal detective, Luis Alvarez who, despite his declining health, publicly campaigned alongside Jon to get the fund replenished.

Sadly, Luis' sadly passed away just weeks after his appearance in Congress...

But, shortly after his death, justice was served. Congress finally authorized the passage of a long-term compensation package for 9/11 first responders.

The Senate reportedly voted 97-2 to pass the healthcare bill, which will extend coverage for surviving first responders for decades to come.

The first responders finally have access to the health care that they deserve.

The new bill, which now includes Alvarez's name, extends the expiration date through 2090 and will cost what is deemed necessary. The Congressional Budget Office estimates that it will cost about $10 billion over the next decade.

He was pictured hugging and beaming with other campaigners and first responders, and made a touching speech shortly after the announcement.

And now, just over a year on from that victory...

Stewart has his visions set upon a whole new group of heroes in desperate need of help.

He is now fighting to get adequate health care and justice for U.S soldiers.

Because, you may not be aware, but our veterans are dying. It has recently emerged that over 200,000 war veterans were exposed to toxic "burn pits" while at war, and they have subsequently suffered from debilitating health conditions and, in extreme cases, death, as a result of the fumes.

But what exactly are burn pits?

These materials were burned in "burn pits"...

However, soldiers have come forward with damning claims against the health and safety of these toxic pits, some of which were larger than a football field. According to Fox News, many soldiers said the pits were a crude method of incineration in which every piece of waste was burned, including plastics, batteries, appliances, medicine, dead animals, and even human waste.

Jet fuel was often used as the accelerant.

The pits burned more than 1,000 different chemical compounds day and night, and most service members breathed in the toxic fumes with no protection.

But the U.S. government has continuously said that the toxic substances are not conclusively linked to severe health conditions.

And this is where Jon Stewart gets involved.

In an address at the U.S. Capitol on Tuesday, Stewart blasted lawmakers for not granting broad care and benefits to veterans impacted by the burn pits, stating that the U.S. government has failed service members by setting an "almost impossibly high bar" to prove they were exposed to toxins.

"When is America going to start acting like the great country we keep telling ourselves we are?"

Standing outside the Capitol above a sign that reads "Burn Pits Kill. Support War Fighters", Stewart reminisced on his battle to get adequate care for the 9/11 responders and said: "It turns out that the warfighters who were sent to prosecute the battle based on the attack of 9/11, now have the same injuries and illnesses that the first responders suffered from."

"And they're getting the same cold shoulder from Congress."

His speech was truly damning and, in a later interview with the Washington Post, he said: "War after war after war, we treat them as expendable. And when they come home, we’re done with them. If an enemy did this to us, we’d … bomb them into oblivion. We did it to ourselves and we’re ignoring it."

He appeared with Sen. Kirsten Gillibrand and Rep. Raul Ruiz, the legislation’s sponsors.

The measure would grant a presumption of exposure to veterans with certain conditions and who served in one of the thirty-three countries where troops were deployed after the 9/11 attacks, Gillibrand said.

You can watch his speech here.

Congress is yet to respond to the proposal, but we will post updates accordingly.