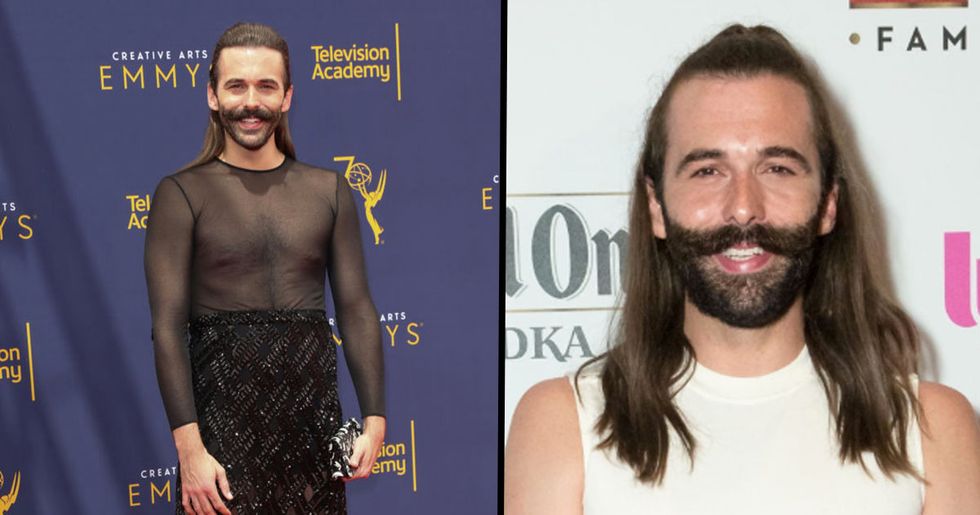 If you're a fan of the Netflix show, Queer Eye (and let's face it, who isn't?), you'll already be familiar with the wonder that is Jonathan Van Ness. The celebrity hairdresser and internet personality already had a cult fan following before he was cast in the reboot makeover show, but this star has only been on the rise since.

Many have praised Van Ness for his freedom of self-expression - much of which is done through his (sometimes rather out-there) fashion choices. He's just as at home in a pair of jeans as he is in a ballgown. But, now, speaking with Out magazine, Van Ness has revealed that his complex gender expression runs a little deeper than simply wearing a skirt every now and again.

Jonathan Van Ness was born in 1987 in Quincy, Illinois.

After training at the Aveda Institute in Minneapolis, Minnesota, Van Ness moved to Los Angeles in 2009 to pursue his dream of hairdressing.

But his fame has extended beyond just doing hair.

Van Ness has always had a personality that has meant he is destined for fame and he has made a name for himself across a range of entertainment platforms.

Each takes responsibility for making over a certain aspect of their guests' life.

And Van Ness's role? Well, he looks after the beauty aspect of the makeover, introducing the participants to a skin and hair care routine to have them looking their best and feeling more confident.

Van Ness has other entertainment ventures, too.

His podcast, Getting Curious with Jonathan Van Ness, is hugely successful. Each episode follows Van Ness interviewing an expert on one particular and specific topic, making learning fun.

Since his rise to fame, Van Ness has cultivated an iconic red carpet presence.

And a lot of his cache is based upon his outfits - which are always interesting, extravagant, and just the right level of over-the-top.

Because the star is never restricted by gender when it comes to his clothing choices. In fact, he's just as often pictured in stereotypically "female" clothing items as he is in "male" clothing.

Many people love his freedom of expression.

It's extremely refreshing to see someone be unapologetically themselves in a world that tends to want to categorize people into very specific little boxes.

And now, Van Ness has spoken out about his identity for the first time.

Van Ness has collaborated with nail polish brand, Essie - and in a promotional interview for the collab with Out Magazine, he decided that it was time to break his silence.

Van Ness never had to "come out" as a gay man.

But, in spite of being very open about his sexuality, he is still subject to a lot of abuse. On a heartwrenching episode of Queer Eye, Van Ness described it as being "chased around with torches and pitchforks".

But since he's been in the public eye, he has taken a closer look at his identity.

Out Magazine asked Van Ness how he felt about representing Essie, a brand whose target audience is primarily female. And his response was quite surprising.

He seemed hugely excited about the collaboration.

In fact, Van Ness has a pretty strong stance on gender overall.

"Any opportunity I have to break down stereotypes of the binary, I am down for it, I’m here for it. I think that a lot of times gender is used to separate and divide. It’s this social construct that I don’t really feel like I fit into the way I used to," he explained.

"I always used to think 'Oh, I’m like a gay man' but I think any way I can let little boys and little girls know that they can express themselves and they can like be — like, making iconic partnerships with brands like Essie no matter how they present is really important and exciting".

Van Ness claims that trying to fit the label of a gay man left him feeling more confused than ever.

“I didn’t think I was allowed to be nonconforming or genderqueer or nonbinary — I was just always like 'a gay man' because that’s just the label I thought I had to be," he says.

Van Ness did confirm that he still prefers he/him pronouns.

But he has also said that he feels uncomfortable with the label of "man," and wouldn't apply it to himself anymore.

People are very happy for Van Ness being more open with his identity.

Out Magazine editor, Fran Tirado, wrote on Twitter, "Though the comedian’s brand and career has hinged on the gay male archetype, 'male' as it turns out, is not a very accurate term to describe him. Congrats, bb!".

We have to echo these congratulations.

We're super happy for Jonathan - but even more so, we hope that his revelation helps others out there who may be having similar struggles with their gender identities.