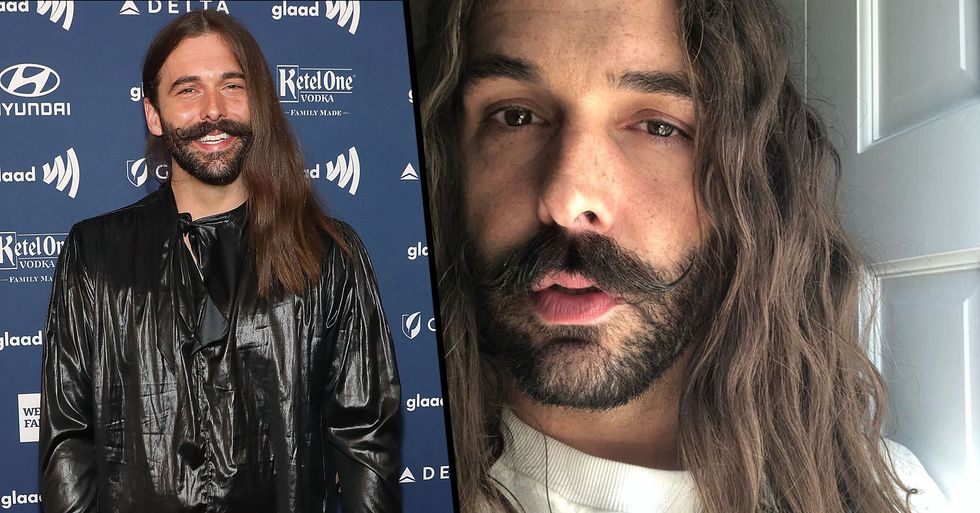 If you're an avid fan of Netflix's Queer Eye, you'll know who Jonathan Van Ness is. The celebrity hairdresser is responsible for the "grooming" segment in the acclaimed reboot makeover show and has since become a fan-favorite.

The star is also known for his trailblazing freedom of expression, which is often portrayed through his fashion choices, where he proves that clothing truly has no gender. In fact, speaking with Out magazine, Van Ness recently revealed that his complex gender expression runs a little deeper than simply wearing a skirt every now and again and that he identifies as gender non-conforming.

But, now, the star has been breaking down stigmas beyond gender, as he revealed he is HIV positive.

In his memoir, the star also spoke candidly about his previous struggle with drug addiction as well as his experience with sexual assault.

Keep scrolling to find out more about his diagnosis and how he's used it to "liberate" himself. It's such an important story...

The star was born in 1987 in Quincy, Illinois, and following training at the Aveda Institute in Minneapolis, Minnesota, moved to Los Angeles in 2009 to pursue his dream of hairdressing.

Each takes responsibility for re-vamping a different aspect of a contestant's life.

From home renovation to a whole new wardrobe, cuisine lessons, and even life coaching – the Fab Five delves deep into the lives of each person featured on the hit revival. And Van Ness's role? He takes care of the grooming aspect, which involves hairdressing, of course, as well as beauty and skincare.

It's much more than just a makeover...

Throughout the series, the Fab Five meet with a diverse line-up of contestants, from those with opposing political views to a trans man recently recovering from top surgery. The gang touches the lives of these people in a unique way.

The show has garnered a significant fanbase.

Queer Eye may have propelled him to stardom, but Van Ness has gone on to do other great things.

He has a leading role in a comedy recap show...

His podcast, Getting Curious with Jonathan Van Ness, is hugely successful. Each episode follows Van Ness interviewing an expert on a specific topic, aiming to put the fun into learning. With a star-studded line-up of guests that have boasted the likes of Reese Witherspoon, singer, Kim Petras, and Jameela Jamil, Van Ness talks about a range of probing topics including climate change, inclusivity, and social media.

Since skyrocketing to fame, Van Ness has found himself well and truly in the fashion spotlight.

The thirty-two-year-old has cultivated an iconic red-carpet presence where he continually proves that garments have no gender.

But his fashion choices run much deeper than aesthetics and occasionally donning garments deemed to be made for a "woman," as the star recently spoke out about his gender expression, revealing that he identifies as gender non-conforming.

He has a very strong stance on the subject.

“Any opportunity I have to break down stereotypes of the binary, I am down for it, I’m here for it. I think that a lot of times gender is used to separate and divide. It’s this social construct that I don’t really feel like I fit into the way I used to," he explained to Out Magazine.

But his gender expression isn't the only thing the loveable-TV-personality has opened up about.

During his upcoming memoir, titled Over The Top, the star has revealed that he is HIV positive.

Van Ness opened up about his diagnosis during an emotional interview.

In a new interview with The New York Times, the star speaks candidly about his traumatic past documented in his new memoir, including drug addiction, the sexual abuse he was subject to as a young boy, and his HIV diagnosis. As per The New York Times: "When he was in his early twenties, a couple he met on Grindr introduced him to drugs. He went to rehab twice and relapsed both times."

But, he was encouraged to clean-up his act when he tested positive for HIV aged twenty-five.

The star fainted suddenly in a salon while highlighting a client’s hair, so, the next day, he went to Planned Parenthood to diagnose his flulike symptoms, where he tested positive for H.I.V. “That day was just as devastating as you would think it would be," he writes, according to the newspaper.

He opened up more about the day to The Guardian.

During the interview, he recalled asking the doctor if he could still live to be seventy-five. “She was, like, ‘I will keep you alive long enough to die of a heart attack or cancer like everyone else,’ and then she laughed uncontrollably," he explained. "It really took some time to figure out how to put my life together." People who are living with the virus and are on effective treatment live just as long as anybody else, and cannot transmit the virus to their partners, but with harmful stereotypes and misinformation, the stigma surrounding the virus is still rife.

But, by talking openly about it, he hopes to break down the stigma.

Shortly after getting his diagnosis, Van Ness stopped the hard drugs and restarted his life in Los Angeles. By opening up 7 years later, he hopes to debunk many of the common misconceptions about living with HIV and to show others who may also have the HIV positive status, that they're not alone. Though it's been a long process, the star says he now considers himself  an "out-and-proud member of the beautiful H.I.V.-positive community."

In fact, he's now liberated by the diagnosis.

“I absolutely do not think I’d have been as socially aware or conscious or want to make as much of a difference," he says, speaking to The Guardian. “It gave me a reason to really fight."

Since telling his story, the star has received a staggering amount of praise.

Several people took to social media to thank the star for opening up about his diagnosis and for paving the way for others who have been affected by the virus.

Words of "love and respect" for the star came pouring in.

Nothing but love and respect for @jvn, whose bravery in sharing his story will hopefully help dispel the stigma and… https://t.co/IBb4T09KeK
— Philip Ellis (@Philip Ellis)1569080628.0

Many wrote how "brave" he is for opening up and attempting to eradicate the harmful stigmas and ignorance surrounding the virus.

We also echo these messages of praise.

We think it's utterly amazing that the star has bravely opened up about his diagnosis. Van Ness's upcoming memoir, Over the Top, is released on September 24.
Buy Now