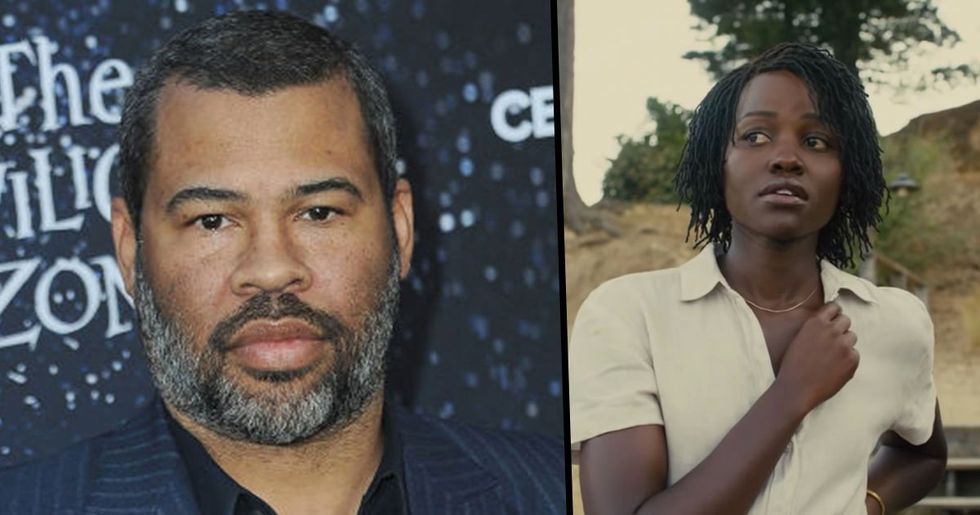 In the middle of the movie's press tour, Peele visited a group of improv students to talk about his rise to success.

It was important to him because he, too, started out as an improv actor. He started acting, pushing through his initial shyness, as a fifth grader and, later, he turned down NYU to pursue Sketch Comedy Studies.

As talented as he is, Peele's career had a lot of ups and downs. He didn't achieve his dream of joining SNL, but this led him to Get Out, the movie that earned him fame, and even an Oscar.

But Peele doesn't care about fame. The most important thing for him is being able to achieve representation for black people in his movies. And he's going to keep doing just that.

Us came out just a week ago and it's already broke a record.

It claimed the title of the highest-grossing weekend for an original horror film, Independent reports.

Jordan Peele is currently on a press tour, promoting the movie.

But he took the time to visit aspiring future directors at the Upright Citizens Brigade Theatre, Hollywood.

He was invited to talk to two-hundred improv students, storytellers, and fans.

The Hollywood Reporter says there was "a sense of familiarity" in the auditorium. That's because Peele started out as an improv actor.

Only in 2012 did he become famous for stand-up comedy and the show Key & Peele.

He spent over an hour talking to the students about his success in directing, his marijuana dependence, Get Out, and why he's not planning on casting any white leads in his movies.

Peele was welcomed into the room with a standing ovation.

The director himself showed up wearing jeans, Nikes, a hoodie and "a T-shirt with Corey Feldman’s face on it, for some reason."

Ian Roberts, the executive producer of Key & Peele, was part of the conversation too.

He said that Us has already made $88 million globally and had the "second-biggest opening for an original live-action film."

Peele added, "That's after Avatar. The stats get cooler when you say the thing that beat me."

He then turned to the audience, saying, "The best way to end this great weekend is with you guys."

When asked when was the first time he discovered his talent, Peele admitted that it was very early in his life.

He knew he was born to do this because he would get this "burning sensation in [his] gut" that was stronger than his shyness.

Soon, Peele was cast in a show that became his "first win in a long career of wins and losses."

He always had a knack for drawing, painting and other visual arts.

But his talen for performing came as a surprise. "The performing part came out of nowhere," he recalled. "It surprised everyone."

His mother was the most surprised of all.

"When I was 7, I did an impression of Ronald Reagan and my mom gave me great feedback," Peele said.

But he believes his performance talent is all thanks to his listening skills.

He calls listening a form of art, and claims that it still has a great influence on his work.

"Nothing is more important," Peele claimed.

"The more you are armed with what you take in, the more ammo you have. [...] Directing for me is about hiring the right people, listening to them and helping them do the best job possible."

Listening to your ego is another key to his success.

"You have to shelve it," he said. "You have to check it constantly. It’s so easy for it to come out and rear its ugly head."

And that, he added, can happen whether you're an improv student or director of a twenty million horror film.

"The ego is deceptive and it will screw you up," he admitted.

Throughout his career, Peele looked up most to comedians Steve Martin and Martin Lawrence.

But it was Tim Burton and Ridley Scott who inspired his directing style, The Hollywood Reporter adds.

Peele realized he wanted to be a director while still in high school.

But instead of enrolling to film studies at NYU, he chose Sarah Lawrence College - a private liberal arts school in Yonkers, New York.

"The day I didn't go to NYU, I said maybe [directing] wasn't for me," Peele recalled.

Eventually, he dropped out of Sarah Lawrence and went on to study improv and sketch comedy.

"But it's not a classically lucrative industry, so it's not like I can recommend that black people get into it because it doesn't pay," he added, drawing an uncomfortable laugh from the audience.

Peele then began studying at Second City, Chicago, where he met Keegan-Michael Key.

It was a match made in heaven, as we soon found out. The pair moved to LA, where they both got gigs on MADtv.

At one point, Peele got an opportunity to join the cast of SNL. It was a long-time dream of his.

But MADtv refused to let him go. It crushed Peele.

He then "locked himself in a room and started smoking a lot of weed, plotting his revenge."

Peele gave himself seven to eight years to become "great."

He started working on several projects at the same time to see which ones will work out. Get Out was one of them. "Every two weeks I'd go, 'What the fuck am I doing? I'm writing a movie where a black man is victimized and all the white people are evil and I'm trying to get the audience to have fun,'" he recalled. "But if you could make that fun […] that's what brought me back."

He did, of course, eventually finish the script.

Peele was surprised when producer Sean McKittrick not only bought his movie but also agreed to let Peele direct it.

The movie had a budget of only $5 million, but it turned out to be a cultural phenomenon, earning $250 million, and winning Peele an Oscar for best original screenplay.

Peele said, after the success of Get Out, his status in Hollywood changed almost overnight.

But he doesn't glorify fame.

"I don't envy someone who gets famous overnight," Peele said. "The hardest part is being recognized. I used to think that being in the public eye gave you power. But all of a sudden, they have the power and can come up to you an hour into dinner."

One other type of power is much more important to him.

"The way I look at it," he explained, "I get to cast black people in my movies. I feel fortunate to be in this position where I can say to Universal, 'I want to make a twenty million horror movie with a black family.' And they say yes."

And he's not going to "mess" with the formula that proved to be so successful.

"I don’t see myself casting a white dude as the lead in my movie. Not that I don’t like white dudes," he said, nodding over to Roberts. "But I've seen that movie."

The moment he said that line, the audience broke out into "loud applause and shouts of agreement," The Hollywood Reporter says.

Peele added, "It really is one of the best, greatest pieces of this story, feeling like we are in this time — a renaissance has happened and proved the myths about representation in the industry are false."

According to Independent, Us has received plenty of positive reviews from critics.

New Yorker even called it a "colossal cinematic achievement." Meanwhile, Jim Orr, president of domestic distribution at Universal, told Variety, "Put simply, Jordan Peele is a genius. He's managed to tap into something that the domestic box office can't get enough of. People can't wait to see what he does next."