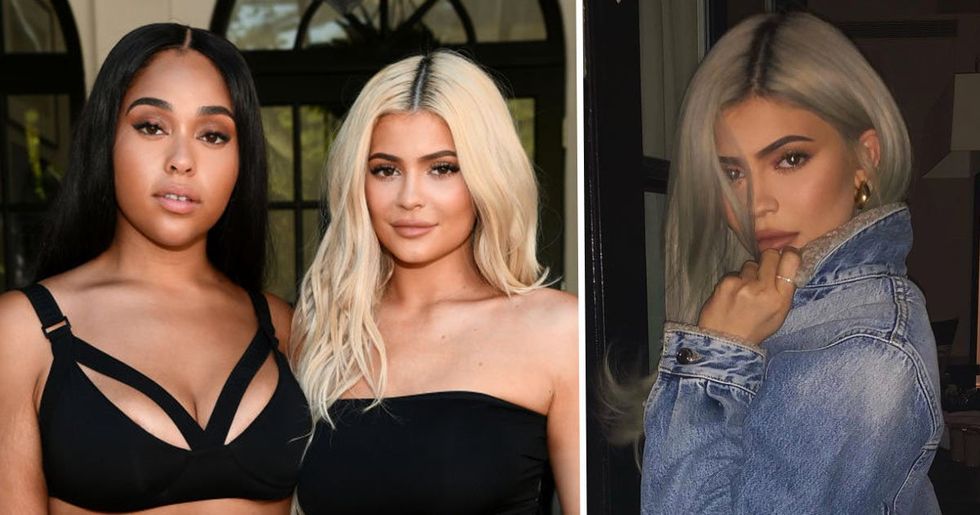 Thelma and Louise, Monica and Rachel, Marissa and Summer, Serena and Blair, Kylie and Jordyn. There are some BFFs that are each other's soul mates. They are always there for each other and always will be. That's what we thought would happen for Kylie and Jordyn for the rest of their lives.

But now it looks like Jordyn is moving out of Kylie's mansion, and it's not just because she wants her own place and her own job. Jordyn is being kicked out following some pretty huge allegations and the payback from the Kardashians isn't stopping there.

Kylie and Jordyn have been BFFs since they were fourteen.

Kylie Jenner and Jordyn Woods met when they were in ninth grade and have been best friends ever since. Their friendship almost makes Kylie Jenner look like a regular gal.

If you were super rich, you'd want to live with your bestie, right?

Kylie invited Jordyn to live with her and Stormi. The three of them even went on holiday together in matching swimsuits. They did everything together.

They even had a joint cosmetics line.

Kylie Jenner has somehow become a business mogul worth nearly a billion dollars. It's no wonder she decided to get her best friend involved too. The two of them have their own cosmetics line called Kylie x Jordyn.

But now people think that they have a shot at being Kylie's new best friend.

BFFs are meant to be forever, it's kind of in the name. But now it looks like people have a chance to replace Jordyn Woods, and people cannot wait.

If Kylie is in search of a new best friend, there are a lot of people up for the job.

Kylie Jenner is in the top ten for most followers on Instagram. Plus she looks set to be the youngest ever self-made billionaire (although how self-made she can claim to be is up for debate). The influence that she has is astounding, and people want to be a part of that.

The internet has their auditions ready and waiting.

Kylie Jenner is the youngest of the Kardashian-Jenner tribe and every moment of their lives is documented. But somewhat bizarrely, people seem keen to join their world of reality TV.

Why do people think they have a shot at being Kylie's BFF?

The rumour mill has gone into overdrive this week. All the signs are pointing towards Tristan Thompson cheating on Khloe Kardashian with Jordyn Woods, Kylie Jenner's best friend.

Kylie and Tristan have been on the rocks for a while.

Last April, three days before Kylie gave birth to their daughter, True, video footage went up of Tristan making out with a random woman in a nightclub. Over the next few days the media released more and more stories of Tristan cheating with a variety of women.

Such a poor show by Tristan.

No matter how real or fake your life is, surely if your partner is days away from giving birth, you need to be there for her? The world watched and waited, but in the end Khloe decided to give him another shot.

Now it seems like he's gone a step too far.

They put all the (many, many) allegations of his cheating behind them with the arrival of True. Instead they focussed on enjoying their first few months together as a family. But now Tristan has been caught cheating again, and with his (sort of) sister-in-law's best friend. Enough is enough, even for the Kardashians.

Losing a BFF is never easy.

Everyone thought that Kylie and Jordyn were forever; they'd been best friends for so long. But now it looks like they are going to have to go their separate ways.

The internet has done what it does best: Trolling and memes.

With the allegations that Tristan has cheated on Khloe with Jordyn, it seems like Jordyn is going to have to move out of her home with Kylie. They can't really live together if Kylie wants to support her sister.

Jordyn was part of the family.

Jordyn was such good friends with Kylie that she was at all their family events and really seemed like part of the family. She was a part of their lives. Was. Now, she is the enemy.

People find the idea of Jordyn Woods being kicked out pretty funny.

As Jordyn Woods has been living with a young billionaire, she's had a pretty good deal going. Now it looks like she's going to have to find her own place.

And does she now need to get herself a job?

As Kylie has such a successful cosmetics line, there have been lots of opportunities for Jordyn to join her in terms of work. But now that Jordyn is out, it looks like she might have to find her own income, which the internet finds hilarious.

In the world of reality TV, and the Kardashians in particular, it can be hard to know what's real and what's pretend. But in light of the new allegations, this tweet from Jordyn does not look so good these days.

Jordyn isn't the only one to be out of the Kardashian-Jenner clan.

Blac Chyna was an enemy of Kylie Jenner, after Kylie started dating her boyfriend and father of her child. She was a part of their lives for a bit again when she dated Kylie's half-brother Rob, and then she was out again. Now Jordyn can join Blac Chyna and Sofia Richie, who is also ostracised from the Kardashian clan.

People aren't sure how real it is.

Keeping Up With The Kardashians, season 17 is coming out soon. That's right. Season 17. It is the longest-running reality TV series in America. But viewing figures were down for the last season.

You've got to do something to keep it fresh.

After sixteen years, it can be hard to keep people interested in what's going on. Storylines grow stale and the audience thinks it's seen it all. But that's where publicity can work its magic.

The master-mind behind this media monopoly is Kris Jenner. And what a phenomenal job she has done. Kris has managed to get the whole world talking about this, just before the new series comes out.

Kris Jenner is the puppet master.

There is no doubt that Kris Jenner is the puppet master behind the Kardashian-Jenner fame. When Kris' five daughter were aged between ten and twenty-eight years old, she decided to expose their whole lives to fame and scrutiny.

Is this the latest move in Kris' puppet show?

Putting your whole life on the television screen means that every move is calculated. Even if this was not engineered, you can be sure that Kris will make the absolute most out of it.

Some people are feeling pretty cynical about this latest scandal.

If there is actual footage of Jordyn Woods with Tristan Thompson, then it is hard to disbelieve. At the same time, the levels of drama are extra AF. It sort of seems too good to be true, at least for Kris Jenner.

And the plan seems to be working pretty well.

With Jordyn, Tristan, Khloe and Kylie all trending right now, it looks like people's interest is caught. But all was quiet, except for Kim deleting Jordyn and Tristan from Instagram.

What is this supposed to mean?

Suddenly there's been a flash sale on the Kylie x Jordyn cosmetics line. Everything is half price. It looks like Kylie might be trying to cut the prices to replicate her cutting Jordyn out of her life.

And people are desperate to know what's going on.

The Kardashians and Jenners have still remained quiet. But with Jordyn moving out, and the cosmetics line at half price, it seems like it is all about to explode any day now.

But Cardi-B makes a good point.

The way the internet is talking about it all, it can seem like the world is celebrating the drama, when really it is deeply sad that a new family is falling apart. She also points out that women should be supportive of each other.

Why is the focus on Jordyn?

Jordyn Woods just turned 21 in autumn. She is a young, single girl who was living with her best friend and just launched a cosmetics line. Tristan Thompson is 6 years older than her. He has (or had) a partner, a child and a history of cheating. It is very clear who the villain is in this story.

Once a cheater, always a cheater.

Tristan Thompson met Khloe while his girlfriend was pregnant with his son. Throughout his relationship with Khloe there have been rumours (and video evidence) of him cheating on her again. If he was still with Khloe (which is up for debate) then Jordyn should not have done anything with him. But it looks like he was cheating his way out of the Kardashian family one way or another.

Is this the last we've seen of Jordyn and Tristan?

Tristan is the father of Khloe's father, so it's hard to believe that he'll be gone for good, but it looks like their relationship is well and truly over (although you never know with this lot). It's sad to think that such a long and close friendship like Jordyn and Kylie's could be over. Here's hoping that it is all planned, and her return to the clan is set for the future.