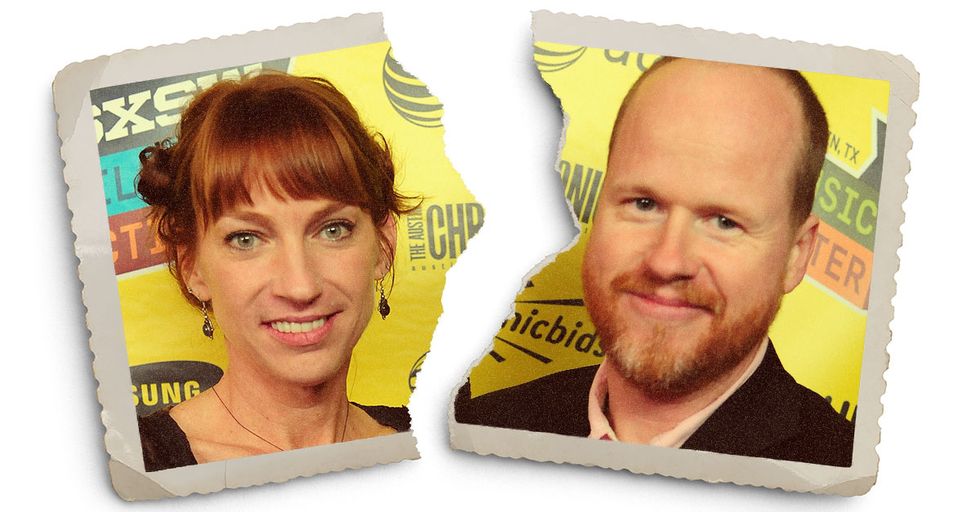 Writer, director, and celebrated Hollywood male feminist, Joss Whedon, is getting Buffy-the-Vampire-Slayed on the Internet after his ex-wife of 16 years, Kai Cole, wrote a scathing tell-all essay about his numerous infidelities and deep-seated hypocrisy published on The Wrap.

The creator of Buffy, Angel, and writer/director of Marvel's The Avengers, to name a few, has always been lauded as a champion for women in Hollywood. He has a long track record of writing strong female characters, casting talented women in his projects, and has been an outspoken feminist ally to women.

But apparently, he likes women a little too much.

Kai Cole and Joss Whedon were married for 16 fraught years before they finally called it quits in 2012.

But Cole wasn't just going to let him slip away quietly.

In response to recent questions from the press, she wrote a guest blog for The Wrap detailing the years of deception and emotional abuse she endured at the hands of this so-called feminist ally. According to Cole, Whedon had his first affair on the set of Buffy, in the very early days of their marriage.

"There were times in our relationship that I was uncomfortable with the attention Joss paid other women," Cole wrote.

"He always had a lot of female friends," she continued, "but he told me it was because his mother raised him as a feminist, so he just liked women better. He said he admired and respected females, he didn't lust after them."

Years later, he finally came forward with the truth.

Cole wrote, "Fifteen years later, when he was done with our marriage and finally ready to tell the truth, he wrote me, 'When I was running Buffy, I was surrounded by beautiful, needy, aggressive young women. It felt like I had a disease, like something from a Greek myth. Suddenly I am a powerful producer and the world is laid out at my feet and I can't touch it.' But he did touch it."

Cole's story makes it clear that Whedon felt as if he deserved the female attention paid to him by these so-called "needy" actresses.

The man pictured here, receiving an award at the UN Women USNC L.A. Media Summit for his work with the feminist #HeForShe movement, is this very same man. The same man who speaks out consistently for the rights of women then clearly exploits his position of power and drags his own wife down with him. That doesn't quite seem like a true friend to women.

Cole continued, "Joss admitted that... he hid multiple affairs and a number of inappropriate emotional ones that he had with his actresses, co-workers, fans and friends, while he stayed married to me."

He wrote to her about how he never really loved anyone but her, and yet, here he was having secret affairs for over a decade. "He wanted it all," Cole wrote, "he didn't want to choose, so he accepted the duality as a part of his life."

Whedon even tried to claim that what he was doing was totally normal considering his position in Hollywood.

Cole wrote, "When he walked out of our marriage, and was trying to make 'things seem less bewildering' to help me understand how he could have lied to me for so long, he said, 'In many ways I was the HEIGHT of normal, in this culture. We're taught to be providers and companions and at the same time, to conquer and acquire — specifically sexually — and I was pulling off both!'" Can you say, "Puke!"?

"Nice guy abuse" is scarily close to what Cole describes about Whedon's behavior.

Many were not surprised.

It's not uncommon for guys to loudly tout their feminism in public while spouting sexist and objectifying comments in private. We live in a society where men — even many of the "good" ones — haven't been taught what it actually means to respect and treat women properly, to see women as truly equal to men. Society's issues don't get Whedon off the hook for his awful behavior, though. The guy is a total hypocrite.

Some thought Cole's essay went a bit too far.

This Twitter user points out that there are children to consider in this situation, that maybe Cole got a little too caught up in the revenge game. However, it should be said that this essay can't possibly be as damaging to a family as 15 years of secret affairs.

Whedon's team put out a very non-statement statement in response to Cole's piece.

The essay's Editor's Note reads, "A spokesperson for Joss Whedon provided the following response, 'While this account includes inaccuracies and misrepresentations which can be harmful to their family, Joss is not commenting, out of concern for his children and out of respect for his ex-wife.'" Well, if that's not the fakest high road statement in the history of fake high road statements...

In case you thought this was Whedon's first trip down Controversy Lane, it's not.

In addition to not practicing what he preaches on the feminism front, Whedon has a long problematic history of whitewashing his characters.

So, do you have to swear off Buffy forever now?

Nah. You can watch a show about a cool woman kicking vampire butt while simultaneously knowing that the guy who created it is a swirling mess of racism and sexism and false feminism. If you can do that, anything is possible.