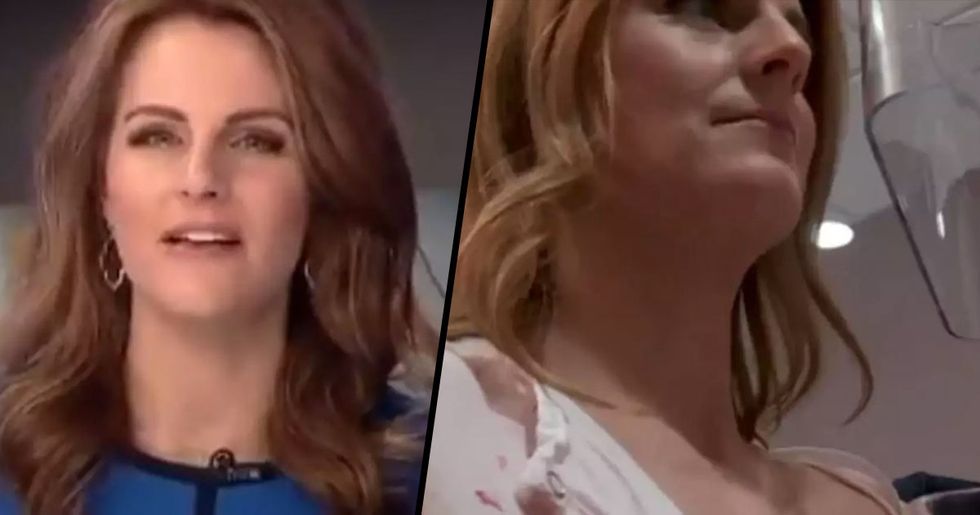 Those who are fortunate enough to have never been diagnosed with a life-threatening illness will not understand the heart-wrenching feeling that a person experiences when receiving this type of bad news.

Privacy and support are what is needed when news like this is given, so imagine receiving a breast cancer diagnosis... live on air for the entire nation to see.

A KFOR-TV journalist underwent a routine check-up live on air in a bid to raise awareness, but little did she expect that the results would come back positive for breast cancer.

Breast cancer is one of the most common forms of cancer a person can develop.

According to statistics, about 1 in 8 American women will develop invasive breast cancer over the course of their lifetime.

Men can also be diagnosed...

It was also predicted that around 2,670 new cases of invasive breast cancer were expected to be diagnosed in men this year.

Breast cancer is one of the biggest killers of women.

Despite death rates decreasing continuously since 1989, around 41,760 American women are expected to lose their lives to breast cancer in 2019 alone.

Getting checked out regularly is vital.

If breast cancer is caught early, it is more likely to be treated successfully and less likely to return.

Self-checking and routine check-ups are so important...

During this month, people all over the world raise money for breast cancer charities and they also stress awareness and the importance of regular check-ups.

Yet many women fail to attend check-ups and routine appointments...

Many women are concerned about health risks during check-ups, such as radiation from the mammogram - the X-ray used to examine the breast - and a lot of women are afraid of pain during the procedures and check-ups.

Last October, a journalist decided to go for a check-up live on air...

But she found out something that she didn't expect, at all.

And last year she Facebook Live-streamed a routine screening at the Stephenson Cancer Center in Oklahoma City.

Meyer appeared chirpy and optimistic when she was preparing to go in for the mammogram.

Meyer, the TV crew and the medical professionals expected the mammogram to be over within minutes and that they would be "in and out."

The mammogram took longer than expected...

Cancerous calcifications were found in Meyer's right breast. She explained this solemnly on the Facebook Live-stream and went on to tell her followers how she was scheduled for an MRI to fully see what she was dealing with.

In similarity to millions of women around the world, Meyer didn't get the news she wanted.

Ali also explained the impact of the unexpected diagnosis, saying: "It’s been hard and shocking." "It does kind of rock you to your core. This is not the news I was hoping to tell you about to raise breast cancer awareness, but it’s what I got."

Meyer's diagnosis is one of the most survivable forms of breast cancer...

However, she was told that her right breast would need to be fully removed, leaving Meyer distraught.

Like others with cancer, Meyer was no longer in control of her own body.

Thankfully, surgery is available to reconstruct the breast removed...

And Meyer chatted to surgeons and agreed to let cameras film plastic surgeon Dr. Oscar Masters reconstruct the breast that she had lost.

Modern-day surgery allows women to rebuild their bodies after traumas such as these.

Dr. Masters said that medical advances in surgical techniques have given women a much greater chance of retaining their breast skin, as well as their nipple, allowing reconstruction to have a much more natural look.

Meyer's 2 surgeries were a success...

And she is now cancer-free!

She has been told by doctors that she is "most likely to be completely cured."

Meyer wouldn't have caught her cancer if it wasn't for the check-up...

Meyer is now trying to encourage more women to go and see their doctor and have all the necessary tests in order to catch the disease early - making it more likely to be treated.

She said: "My outcome was better because my mammogram found the cancer before I even knew it was there." The importance of going for a routine check-up cannot be stressed enough as ultimately, it can save your life.