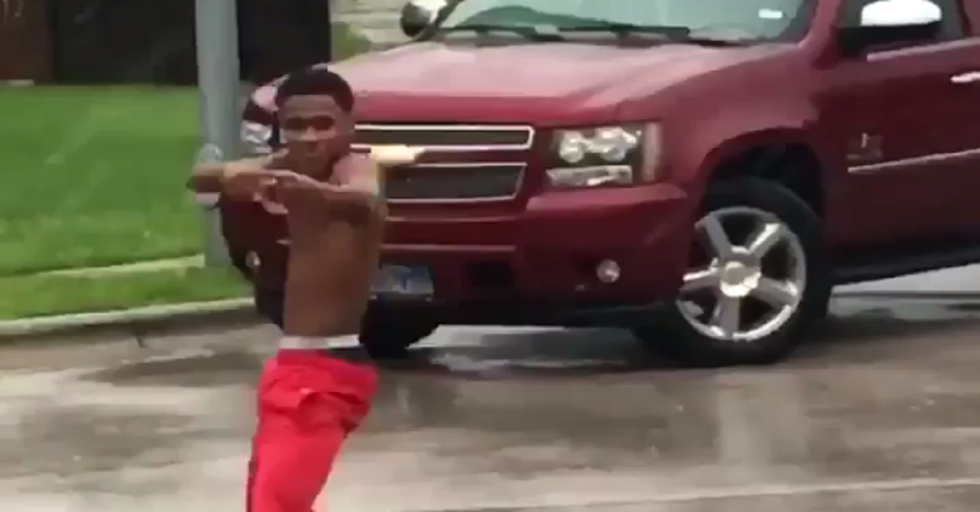 It's always great to see the community pull together and work to heal after a terrible tragedy like Hurricane Harvey. Thousands of people have volunteered themselves to aid in the recovery, and thousands more have donated funds to disaster relief organizations to help.

However, one man has a different way to heal. And damn if it isn't brilliant.

You're probably well-aware of the damage Hurricane Harvey has caused, by now.

But despite the tragic circumstances, thankfully, tens of thousands of people have raised millions of dollars to aid in the recovery of Hurricane Harvey.

Money is a necessary part of recovery, but sometimes the emotional impact of raising money can be even larger than the financial impact.

That is where our unlikely hero comes in.

This is Deandre Wilson. He has mad dance skills. He isn't bothered by your silly hurricane.

People absolutely loved his carefree dancing, so much so that the original tweet has amassed over 100,000 retweets.

And with good reason. Sometimes people need an emotional pick-me-up in times of distress, and there is literally nothing better than this.

It's too freakin' good. We lost it when he slapped the water.

Deandre's sweet dance moves started inspiring others to join in, and it got even better.

People started posting their own ridiculous water-slapping dance moves, and it's hilarious.

The way he jumps on the car is gold. The whole video is gold, actually.

The reactions to the dance-challenge were universally positive.

Because sometimes laughter really is the best medicine.

The intention is not to diminish the crisis in Houston, but to offer small moments of relief in a dark time.

And luckily everyone seemed to get that. What are the odds of that?

And then even more people started to hop on this dance challenge.

Those are the kind of quality moves that will heal our nation after this tragedy. I salute these dancing heroes.

It just kept growing and growing.

More and more people started joining in on Deandre's dance challenge, and before you knew it, half of Houston was out dancing in the rain.

If you're at a loss for words, you're not alone.

But it's absolutely legendary.

The original tweet has nearly a quarter-million favorites, which is absolutely ridiculous.

Some have helped Houston financially, which is incredibly important.

But Deandre has started helping Houston emotionally, unexpectedly through dance.

We are feeling some kind of inspired right now.

There is some dancing to be done.