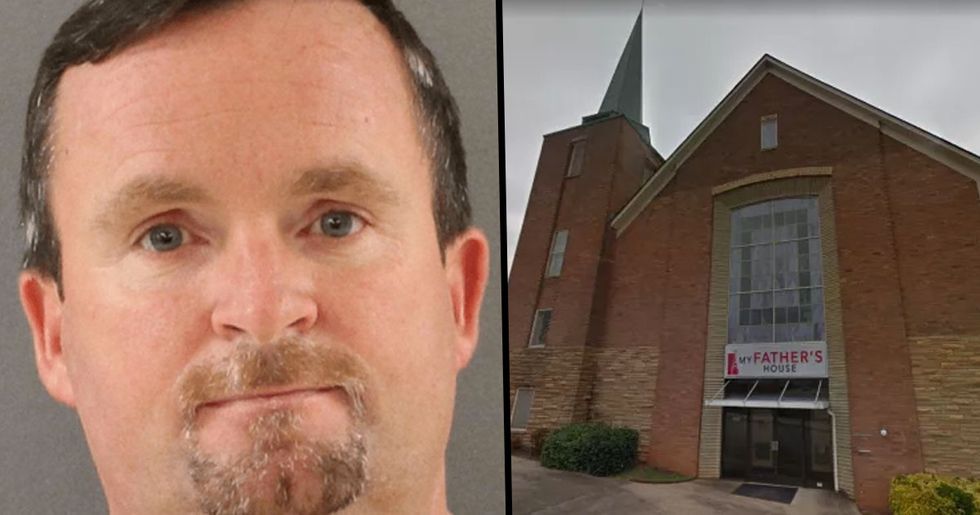 Last week, pastor, David Lynn Richards Jr., was sentenced to twelve years of jail time in Knoxville, Tennessee. However, the prosecutors wanted to give him a life sentence - God knows he deserves it.

The victim, Richards' daughter, Amber, decided to not stay anonymous and to go public with her statement. She said that she "wanted to throw [her] body away" every day in the years that her father raped and abused her. But she promised to keep fighting.

Unfortunately, Judge Steven Sword seemed to be more moved by the rapist's "church ways" than the poor girl's horror.

But even though he was unable to do his job right, the rest of the world did what they could to rectify the problem. People have condemned Richards and are hoping in prison he'll get the real justice Amber deserves.

Scroll down for more details about the case, the judge's decision, and a video of Amber's reaction to the court's decision.

But, clearly, it's far from progressive if the judges there can’t tell right from wrong.

Sixty-four per cent of its nearly 200,000 residents identify themselves as religious. Thirty-two per cent of them, according to Best Places, are Protestant Christians.

So when you hear that someone is suing a pastor, you know they don’t have much of a chance.

Especially if they're a young woman accusing their pastor father of repeated rape.

On Thursday, one such pastor was given a soft sentence because, to quote Michael Stone, Patheos, "nothing says 'good Christian man' like rape and incest."

Pastor David Lynn Richards Jr. from Knoxville, Tennessee, was sentenced to just twelve years in prison after the judge decided that, because he had done a lot of good work for his church, he didn't deserve life behind bars.

But the judge said no, Knox News reports. It seems that he believed that doing good work for the church outweighs years of rape, abuse, and even lying in court under oath (and to the judge himself) - more on that later.

So he gave him a sixty-year discount.

These included rape and incest.

He was also charged with "sexual battery by an authority figure for abusing his adoptive daughter, Amber Richards, for 2 years beginning when she was fourteen."

The court listened to the victim's testimony.

She was braver than any young girl should ever have to be. Amber decided not to go anonymous and to speak publicly about what had been done to her.

She had been abused for 2 years before she reported it.

She was asked to tell the court about the impact her father's abuse and rape had on her.

But then she added, "I’m not going to let him ruin my life. You can’t keep me down… I will keep fighting."

She also said that she "firmly believes if given the opportunity, he would victimize another young girl."

In court, Amber sat on the other side of the room. But she wasn't alone.

She was joined by 6 other people, including her biological parents who she'd found in the recent years.

Meanwhile, Richards lied during the trial, acting as though he was innocent. He asked the judge for mercy.

How he came to the decision that Richards didn't deserve life in prison, we'll never understand.

Richards went to the stand and blamed the victim for being raped.

He claimed that Amber was a "defiant teenager who didn’t appreciate his attempts to impose strict rules for his children."

He said, "I stand before you convicted of crimes I did not commit."

"I simply believe the system just erred in this case. I’m not sure why I’m here… but I assume it’s for His purpose."

He lied even though there was evidence against him.

Knox News reports, "Forensic testing uncovered the presence of seminal fluid on the girl’s bed frame which was then matched to Richards via DNA testing."

The judge "had a lot of freedom" when it came to his sentencing decision.

That's because "most of the charges Richards was convicted of - including rape - are punishable by probation alone under state law."

"Only the charge of sexual battery by an authority figure requires a minimum of three years mandatory imprisonment."

Eventually, Judge Sword weighed Richards' crimes against his longtime work as a pastor and support from family and friends, concluding that twelve years is enough to pay for the trauma that Amber will carry with her for the rest of her life.

He was swooned by the fact that the pastor continued his work even behind bars.

"He began a Bible study among his fellow inmates while jailed at the Knox County Detention Facility."

People showed up in court to support Richards.

Knox News says that more than thirty people sat on Richards' side in the courtroom.

One of them was David Thompson, who shared ministry duties with him at My Father's House Church of God in Lenoir City.

He supported the lenient sentence, saying, "I find it impossible for me to believe he's guilty of this."

"His business needs him. His family needs him. Our church needs him." Well, Amber needs justice.

Even after considering the years that Richards had spent repeatedly raping his daughter and abusing his position as her sole guardian, the judge stuck to his initial decision.

And the horrible case still isn't over.

Even though Judge Sword couldn’t do his job properly, the rest of the world is certainly doing its best to do it for him.

People across the country and the whole world have condemned the incestuous rapist, praying that he will get what he really deserves in prison.

@EAKozmoz wrote, "I hope his hard time is truly terrible and nightmarish for him."

@lolo_dizzle believes that the judge should resign: "It's obvious the sentence is based on the judge's inability to separate church and the law in his decision making."

@feloneouscat said, "Throw them both in a hole."

@tarakerin: "WHAT IN THE HELL SORT OF EVIL IS BEING PUT IN THE WATER THERE?"

The judge’s decision especially doesn’t make when sense when you compare it to other convictions.

A lot of people have gone to prison for a much longer time for less heinous crimes.

Such as this poor guy:

Luckily, he eventually found happiness: he got a job as an HVAC technician, found his own place, has a great girlfriend, and has been promoted to manager.

Amber, on the other hand, will need years of therapy to put her life back together.

@ChapmanDarrick rightly noted: "The amount of cases like this is a little larger than I had ever imagined."

Hopefully, justice for the girl will eventually be served. If not in the courtroom, then during Richards' twelve years in prison."

To quote @Nasty_Woman1, "maybe the other prisoners will teach him a thing or two."