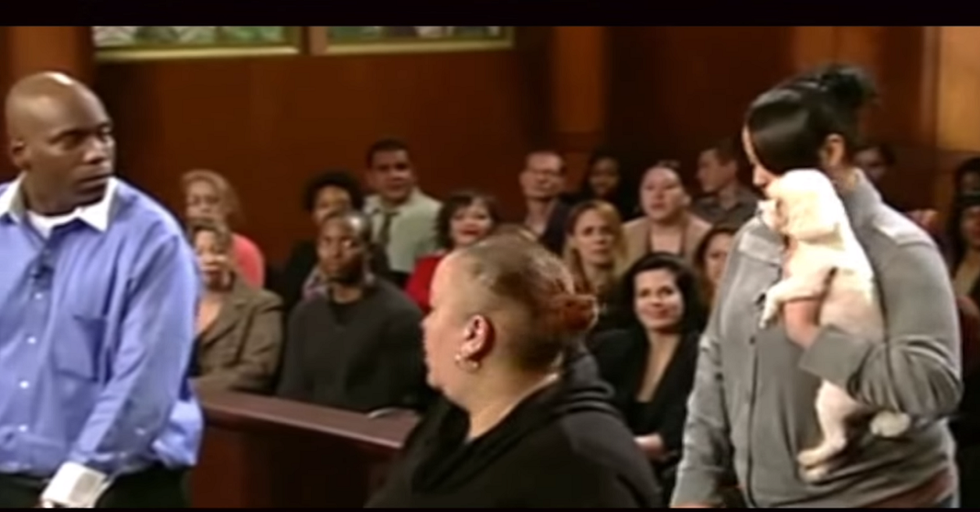 Custody battles are an increasingly common thing nowadays, but something you see less often is a custody battle over a pet.

Even less common than that is how Judge Judy handled this odd case. Let's take a look.

First let's set up the context of the matter. It's 2017 and pets are a vitally important part of many families.

So it should be no surprise that they're treated similarly to how loving people would treat their children. That is to say, the furry friends are loved and protected by any means necessary.

That means things can get VERY tricky when a couple splits up and has to decide who raises their animal.

As you can see, many make light of the fact that people might be more likely to get protective over dogs than cats, but to each their own, right?

Jokes aside, it's a serious issue that very much affects the happiness and well being of a pet AND its humans.

So while custody battles are never fun, they may be a necessary evil in assigning ownership and guardianship over animals.

But where do couples, amicable or not, go to work this sort of thing out? Small claims court?

Ugh. That seems pretty harsh, doesn't it? Maybe they could find a more personal avenue befitting the nature of the dispute.

Why, you seek recourse with Judge Judy of course!

The man and the woman were arguing over who rightfully owned the dog.

The woman claimed that she had legally bought the dog from someone on the street, while the man bringing suit claimed that he had the dog stolen from him.

It was definitely not your traditional custody war, so Judge Judy took a different approach to determining the true owner.

Judge Judy had the dog brought into the court room and decided that the pup would decide who its rightful owner is.

Wait. Is this going to be one of those heartwarming moments that we'll cherish forever?

It just might be! Hold for a release of all the feelings you've ever had in your body. It's gonna get messy with love and "AWWWs" in here.

Get your tissues ready, because this is the cutest thing ever.

The dog pretty much immediately recognized the man and was specifically looking at him and going wild.

Hold on to all the glee you're experiencing, because the defendant makes an outrageous claim that might just send up the wall.

That feeling of pure joy was too pure to last forever. See what a possibly-vindictive woman does to try to wipe it all away in the name of self-interest. Your blood will boil.

The defendant claimed "she does that to everyone," but Judge Judy wasn't buying it.

It only took about five seconds for Judge Judy to reach a verdict, and the man was reunited with his dog.

Score one for righteousness in the most unlikely of places — a daytime TV fake courtroom!

Good job, Judge Judy for seeing right through the ruse and doing the right thing. No doubt the pup and the dad appreciate it.

People were melting down at how cute the video was.

The dog definitely recognizes the man, so I think I have to agree with the judge here.

If you watch the full video, you get responses from the man and the woman after the case.

The best part is the man's reaction after he gets his dog back. "Thank you, Judge Judy, you aren't so mean after all!"

It was an bizarrely emotional episode.

The more I watch the dog and the man, the cuter it gets. I guess even Judge Judy seems a little more sympathetic and nicer when there's a pup around. She's just like us!