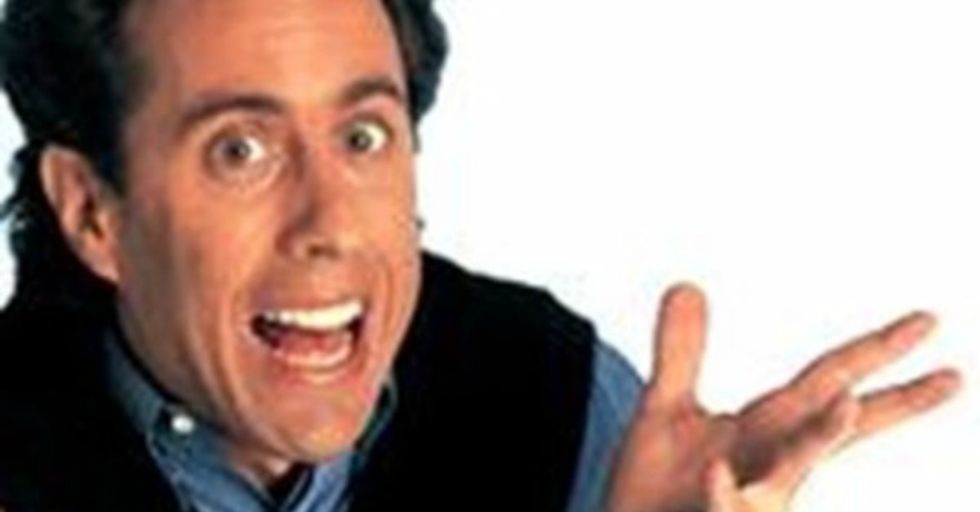 If you were alive in the '90s and not watching Seinfeld, what even was your life?

Some argue Seinfeld is a show about nothing. Others stand firm in the belief that their lives would be nothing without it. So...what's all the fuss?

We decided to do a little digging and found a treasure trove of secrets even the most seasoned Seinfeld buffs never knew.

Seinfeld Was Supposed To Be a One-Off Television Special

Seinfeld was nearly not a sitcom. NBC originally commission the idea as a 90-minute special called Stand Up. It was going to air during Saturday Night Live’s timeslot, but then those silly execs came to their senses.

When asked in a Reddit AMA whether there were ever story ideas they had to scrap for fear of going too far, Jerry Seinfeld revealed they’d once tried out an episode where Jerry buys a handgun. But even the great Jerry Seinfeld couldn’t find a way to make guns funny. Because guns aren’t funny.

Creators Never Meant For It To Be a "Show About Nothing"

When asked if they meant to make Seinfeld a show about nothing, Seinfeld told Reddit, “The pitch for the show, the real pitch, when Larry and I went to NBC in 1988, was we want to show how a comedian gets his material." “The show about nothing was just a joke in an episode many years later, and Larry and I to this day are surprised that it caught on as a way that people describe the show, because to us it's the opposite of that."

Never ever. This is ANARCHY!

Elaine’s Dad Was Honestly as Scary as He Seemed

Not only was Elaine’s father based on Larry David’s terrifying real-life ex, Monica Yate’s father, Richard Yates, but the actor chosen to play him, Lawrence Tierney, was also fear-inducing. He stole a butcher knife from set. Major yikes!

In the pilot, the show’s creators originally named Kramer Kessler. Why? The character was based on Larry David’s real neighbor, Kenny Kramer, and Kenny wouldn’t give up the rights to his name. He eventually caved for $1,000. Seem low? Don’t worry! Kenny Kramer also runs a Seinfeld bus tour, which is still going strong after 19 years. He’s got in made in the shade.

George’s Answering Machine Message? That Was REAL TOO!

One of the show’s writers encountered a girl with a similar phone message in real life. Once they wrote her into the show, the writers called her and left a message, telling her to watch the night’s new episode.

Jerry Seinfeld Is Banned From the Real Soup Nazi’s Shop

The Soup Nazi is real, and he is pissed. Al Yeganeh, a real NYC restaurant owner felt seriously famished about Seinfeld’s depiction of him on the show. on’t believe us? Check out this interview he gave years later. Oof.

Much like Kramer was based on a real person, so too was George Costanza. At least that’s what Seinfeld’s former friend, Michael Costanza claims. He sued the show for $100 million, claiming its creators violated his privacy. A judge ruled in the creator’s favor, claiming the character was actually based on Larry David, but Michael still wrote a book called...The Real Seinfeld (As Told by the Real Costanza), detailing his version of the story. In the tell-all, Costanza writes, “George is bald. I am bald. George is stocky. I am stocky. George and I both went to Queens College with Jerry. George's high-school teacher nicknamed him ‘Can't stand ya.’ So did mine. George had a thing about bathrooms and parking spaces. So do I." How Costanza of him.

Jerry Begged Someone Else To Be George

Julia Louis-Dreyfus was indeed the reason behind Susan Ross, George’s fiancee’s untimely demise. Neither she nor Jason Alexander could ever find a groove with the actress who played her, Heidi Swedberg. So one day, Julia offhandedly suggested they just kill her off, and Larry David took the bait. Moves made!

It’s during the marine biologist episode. When George pulls out the golf ball in the end. Classic.

Seinfeld’s costume crew dress George Costanza in clothes one size too small. They thought the smaller clothes would make him seem all the more awkward. They weren’t wrong.

Jason Thought the Show Would Flop

Jason Alexander never thought Seinfeld would reach the heights it did. "With this show (Seinfeld)," he once explained to Deseret News, "from the moment I saw the script I thought it would be the most brilliant thing I'd ever be part of, and that it would not run for even a day." "Because the audience for this show is me, and I don't watch TV, but I don't think anyone is more surprised by the success of (Seinfeld) than we are, because we thought, `Oh, we'll amuse ourselves, and that'll be it. We'll have a videotape at the end of it that we could play at parties.'"

That puffy shirt? It lives! IT LIVES! At the Smithsonian to be exact, readily available for your viewing pleasure.

Larry David left George Castanza out of one episode in the show's third season (the one when Jerry and Elaine go to Florida to visit Jerry’s parents) and Jason was not having it. He warned David, “If you do it again, do it permanently."

No Hugging, No Learning

Larry David wholeheartedly believed that the show would only retain its unique sense of humor if its character never hugged nor learned anything of consequence. Then, and only then, could they remain the lovable idiots we all seemingly couldn’t and still can't not watch. Good call, Lar.

Before Dumb & Dumber, the Farrelly Brothers Wrote For Seinfeld

Larry David was never a fan of the dance, and another writer feared the scene would ruin Julia Louis-Dreyfus’s career. That year? Dreyfus won an Emmy. Guys. Take risks!

Jackie Chiles Nearly Had a Spinoff

The show’s fast-talking lawyer character nearly had a spinoff of his very own after Seinfeld’s run came to an end. It was going to focus on Chiles’s experience as a lone black lawyer in an all-white law firm. Jerry Seinfeld and Larry David were even in on the thing. Eventually, though, the idea fizzled away into oblivion.

via: I Am Not a Stalker

During the series, fictional Jerry lives at 129 W. 81st Street. Coincidentally in real life, Jerry Seinfeld owns The Beresford, a building located one block away at 211 Central Park West. The actual building shown in the show, though? Not even in NYC. It lives Los Angeles, on New Hampshire Ave.

People LOVED Kramer. They loved Kramer so much that the studio audience wranglers often had to actively curb viewers' incessant clapping because it just lasted so darn long. I mean, can you blame them? Kramer!

Remember the backwards episode in season nine? That one was inspired by a Harold Pinter play called The Betrayal, which also followed a non-linear structure.

Seinfeld’s female lead was originally written as a waitress named Claire who served Jerry and George both coffee and sage advice. She was played by actress, Lee Garlington, and lives in the show’s original pilot. After further review, though, the show's creators decided to evolve Claire into Elaine and find a new actress. ENTER Julia Louis-Dreyfus. COMMENCE history-making.

Season 10 Could Have Happened

But then Jerry Seinfeld turned down NBC’s $110 million offer, and the dream faded off into memory. *Sad faces all around*

Seinfeld Cost a Fan His Job

A Milwaukee Miller Brewing executive was fired on sexual-harassment charges after discussing the episode where Jerry can’t seem to remember his girlfriend’s name. That executive countersued and won $26.6 million dollars, which then, in turn was overturned on appeal.

Yes, those scenes never aired, and yes Larry David voiced all instances of Steinbrenner on the show, but still! Still.

Newman is never given a first name. Some people think his first name is Norman, but that was actually just an actress misreading “Newman." Oh the humanity!

The pilot episode and the series’s final episode each feature the same scene. Same words. Different contexts. Because that button was in the worst possible spot. It did make or break the shirt. It really, really did.

NBC executives decided to increase buzz around the series finale by having their audience members, made up of exclusively friends and other studio executives, sign “vows of silence." They also leaked false rumors. That’s some next-level mind-gaming right there.

Kramer Could Have Been Al Bundy

Prior to nabbing a spot on Seinfeld, Michael Richards auditioned to play crotchety dad, Al Bundy on Married...With Children. Thank God that didn’t work out.

Yes, the famed singer passed away while Seinfeld’s finale was airing. But paramedics were actually able to make their way to his house in only four minutes time likely because so many people were off the roads watching that last episode.

Remember when Jerry’s girlfriend’s toothbrush falls in the toilet, and then she uses it before he can tell her the truth. Yeah, that happened IRL. To one of the writers. He never told his wife about it. Then talked about his omission in an interview. Awkward.