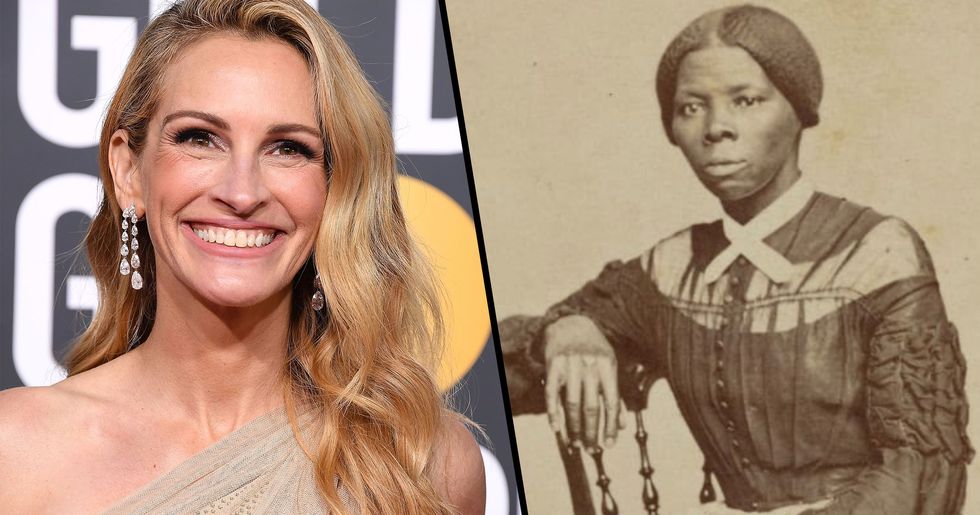 Earlier this month, the movie Harriet was released in cinemas. It set out to portray the incredible and heroic life of Harriet Tubman.

The real Harriet Tubman was an American abolitionist and a political activist who was born into slavery. She made history by making missions to save other enslaved people.

In 1822, Harriet was born in Maryland straight into slavery.

She was born into a family of slaves who were already owned by a wealthy family.

She was one of 9 children born between 1808 and 1832 to enslaved parents in Dorchester County, Maryland. Her mother, Harriet “Rit" Green, was owned by Mary Pattison Brodess, and her father, Ben Ross, who was owned by Anthony Thompson (Thompson and Brodess eventually married).

She wasn't born as Harriet...

Originally named Araminta Harriet Ross, Tubman was nicknamed “Minty" by her parents, and she changed her name to Harriet around the time of her marriage, possibly to honor her mother.

Her early life was full of hardship...

As for any slave in the 1800s, physical violence was a normal part of daily life...

The violence she suffered early in life caused permanent physical injuries. Harriet later recounted a particular day when she was lashed five times before breakfast. She carried the scars for the rest of her life.

Harriet received her most severe injury as a teenager...

According to Biography, she was sent to a dry-goods store for supplies when she encountered a slave who had left the fields without permission. The man’s overseer demanded that Tubman help restrain the runaway. When Tubman refused, the overseer threw a two-pound weight that struck her in the head. Tubman endured seizures, severe headaches and narcoleptic episodes for the rest of her life. She also experienced intense dream states, which she classified as religious experiences.

The line between freedom and slavery was hazy for Harriet and her family.

Harriet’s father, Ben, was freed from slavery at the age of forty-five, as stipulated in the will of a previous owner. Nonetheless, Ben had few options but to continue working as a timber estimator and foreman for his former owners.

Harriet eventually went on to marry and have children of her own, despite her living conditions...

In 1844, Harriet married a free black man named John Tubman. At the time, around half of the African-American people on the eastern shore of Maryland were free, and it was not unusual for a family to include both free and enslaved people.

Following a bout of illness and the death of her owner, Tubman decided to escape slavery in Maryland for Philadelphia. She feared that her family would be further severed and was concerned for her own fate as a sickly slave of low economic value.

Making use of the Underground Railroad, Tubman traveled nearly 90 miles to Philadelphia. She crossed into the free state of Pennsylvania with a feeling of relief and awe and recalled later, “When I found I had crossed that line, I looked at my hands to see if I was the same person. There was such a glory over everything; the sun came like gold through the trees, and over the fields, and I felt like I was in Heaven."

She began to help others...

Between 1850 and 1860, Tubman made nineteen trips from the South to the North following the network known as the "Underground Railroad" - a path to freedom. She guided more than 300 people, including her parents and several siblings, from slavery to freedom, earning the nickname “Moses" for her leadership.

She disregarded her own safety to help others, and eventually, she was free.

In early 1859, abolitionist Senator William H. Seward sold Harriet a small piece of land on the outskirts of Auburn, New York. The land in Auburn became a haven for Tubman’s family and friends. Tubman spent the years following the war on this property, tending to her family and others who had taken up residence there.

She continued to suffer up until her death, however. As Harriet aged, the head injuries sustained early in her life became more painful and disruptive. She underwent brain surgery at Boston’s Massachusetts General Hospital to alleviate the pains and "buzzing" she experienced regularly.

She was buried with military honors at Fort Hill Cemetery in Auburn...

And now, a movie has been made as a further honor to her name.

The biopic is titled Harriet.

Directed by Kasi Lemmons, the movie tells the extraordinary tale of Harriet's life and how she escaped slavery while saving hundreds of others in the process.

Cynthia Erivo was cast as Harriet...

And it's safe to say that the actress did an exceptional job. However, the screenplay writer and producer, Gregory Allen Howard admitted that twenty-five-years ago when the movie was in planning production, ideas were slightly different.

The "climate" in Hollywood was very different...

In an official publicity Q&A to promote Harriet, Howard said, "I was told how one studio head said in a meeting, ‘This script is fantastic. Let’s get Julia Roberts to play Harriet Tubman.' When someone pointed out that Roberts couldn’t be Harriet, the executive responded, ‘It was so long ago. No one is going to know the difference.’"

According to reports in 2015, the film was once due to star Viola Davis, but now is winning Oscar buzz for Erivo’s lead performance. Howard put its lengthy gestation down to the success of two game-changing films - 12 Years A Slave and Black Panther.

In the eyes of the producers, it's all one big money-making scheme.

"When 12 Years A Slave became a hit and did a couple of hundred million dollars worldwide, I told my agent, 'You can't say this kind of story won't make money now.' Then Black Panther really blew the doors open," he went on to say.

There is always going to be criticism...

Of course, the casting of black British actress Cynthia Erivo was criticized ... because she's not African-American. At the end of the day, casting a white woman to play an African-American slave in the 1800s is not only problematic but disrespectful. Producers did the right thing by casting Erivo, and she most certainly honored Harriet by giving the performance of a lifetime.