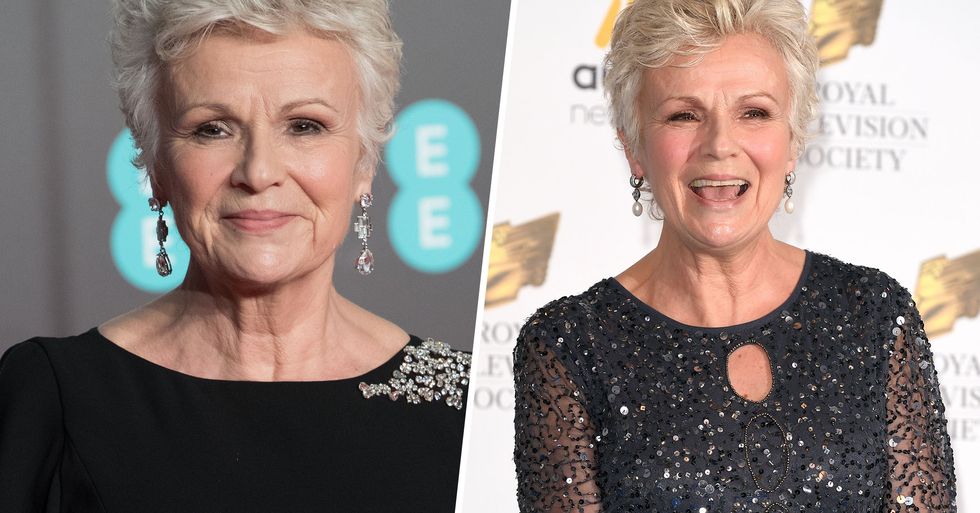 Julie Walters has been a familiar face on our screens for decades - proving so be something of a national treasure over the pond in the U.K.

However, we were left devastated by the news she had been diagnosed with cancer. But it seems this week, she's had some good news...

Keep scrolling for the full story, including her "disbelief" at her diagnosis.

British actress and comedienne, Julie Walters, has been on our screens for more than 3 decades.

And throughout her acting career, she has gone on to dominate the stage, television, and the big screen.

Walters was born on February 22, 1950 in Edgbaston, England.

She had expressed an interest in acting from a very early age, but her mother had other ideas - trying to steer her towards a career in nursing.

And at first, with gritted teeth, a young Walters obliged...

The star dutifully applied for nursing at Queen Elizabeth Hospital in Birmingham, U.K.

But the desire to act proved too strong...

And she eventually pulled the plug on nursing to pursue her dream career.

She began by joining a theatre company and apprenticing as a stand-up comic.

And eventually made her London stage debut in the comedy Funny Peculiar in 1975, according to imdb.

But, in 1980, she really started to command people's attention.

Walters made her London debut in Willy Russell's Educating Rita - something which very much propelled her into the theatre spotlight.

Following her success as Rita, the star began to transfer over onto the big-screen - where she earnt huge acclaim from both fans and critics.

She starred along Liza Minnelli in Stepping Out (1991), took on the iconic role of the ever so stern dance teacher in Billy Elliot (2000), and, of course, played Molly Weasley in the Harry Potter flicks.

Mamma Mia is still one of our favorite guility pleasures.

Her work on both the small and big screen have made her an award-winning actress.

Walters has several accolades under her belt - including 5 British Academy of Film and Television Arts (BAFTA) awards as well as a Golden Globe Award and Oscar nomination.

And that's not nearly the best of it...

She became a Dame!

But, sadly, eighteen months ago, her health took a turn for the worst.

Walters visited her doctor because she was in "slight discomfort" and had indigestion a year earlier. But returned again as her symptoms worsened with vomiting, heartburn, and stomach pain, she explained this week.

She was quickly referred for a CT scan...

The sixty-nine-year-old later received a call with results informing her of the devastating news that she may have cancer.

Walters was filming for The Secret Garden at the time...

She opened up this week about how difficult the news was to tell her husband, Grant Roffey.

"I'll never forget his face. Tears came into his eyes."

Sadly, her bowel cancer diagnosis was confirmed shortly after - meaning she had months of grueling chemo ahead of her.

Walters also had to undergo surgery, where she had 30 cm taken out of her colon.

And she admitted to thinking "Well, I may not come round from the anesthetic."

But, luckily, she did come round.

After coming out of surgery, Walters says she initially felt "marvellous", but "it was only a couple of days later I thought, I feel exhausted, and a bit low actually," she recalled.

Then followed the chemo...

Which Walters described as "fine" and didn't result in the loss of her hair. Sadly, however, she had to be cut from The Secret Garden, after her diagnosis - and she admits this may be the last movie she makes. "I'm not saying I'll never act again. But I certainly don't think I can go back to [a film that requires working] six days a week, five in the morning till seven o'clock at night."

In spite of everything, she remained hopeful that she would beat the cancer.

And now this has become a reality, as she has received the incredible news that she is cancer-free!
"I've just had a scan, and I know that [I'm] clear." Such amazing news!