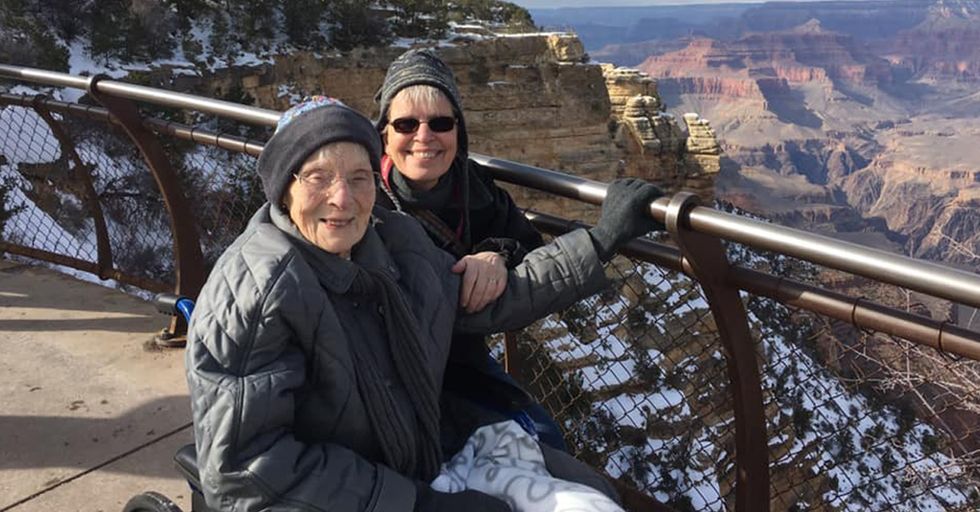 It's never too late to fulfill a dream. And often we are told to never put an age limit on our dreams. But dreams can often feel out of our reach or something we are incapable of ever achieving. But as the saying goes, "If you're going to dream, then dream big!"

A great-great-grandmother is breaking the internet with her recent accomplishment. Rose Torphy, a 103-year-old woman is in the news for achieving a dream of hers and she is living her best life because of it. Rose became a junior ranger at the Grand Canyon National Park on January 14th while on vacation with her daughter.

Amazingly, Rose is older than the park itself, which makes this story that more remarkable. The Grand Canyon celebrates its 100-year anniversary this February.

Rose and her daughter, Cheryl Stoneburner, were at the park visiting Torphy's granddaughter, who works at the Grand Canyon.

I guess you can say that their love for the outdoors runs in the family.

Rose grew up in Wisconsin. Her parents often took her to the lake as a child, so she developed a fondness for nature in her early years.

She currently lives in Chicago.

And visited the park during the longest running government shutdown.

She was sworn in at the park's bookstore.

While in the bookstore, Rose asked to be sworn into the junior ranger program, "which promotes the preservation and protection of national parks."

A love for nature.

Rose's daughter told INSIDER that her mother has always been passionate about the outdoors.

She keeps her pin on daily as a reminder.

Her daughter says that her mother is still wearing her junior ranger pin everywhere she goes. And they have been home for weeks now.

The 103-year-old wants to protect the park for future generations.

Can you blame her? The woman has 10 great-great-grandchildren. Of course, she wants to preserve it. In a video, she described it as "absolutely breathtaking."

Rose is a mother of three.

She is also a grandmother to nine. And a great-grandmother of 18! Holy smokes! You can see why this is so important to her. She wants to keep the Canyon protected for all to enjoy its beauty.

The Junior Ranger program is available to anyone 4 years and older.

"It encourages people to learn about preserving and protecting national parks, according to the National Park Service website. Junior Rangers continue to protect the environment at home and at school."

Rose even made an appearance on Good Morning America.

She told them, "I started talking to people about the program because it teaches kids to protect the Canyon." She went on to say that her parents taught her to care for our land, but not all kids learn this.

This was Rose's second time to the Grand Canyon.

She visited the park once before with her late husband back in the '80's.

Check out this photo she recreated with her daughter.

This is pretty amazing on many levels. Let's remember that this woman is 103-years-old. *Applause*

Her granddaughter currently works at the park.

Cheryl's daughter, Heather, works at the park. The article didn't say what her job title is. Surely though, this tickles Rose's heart.

They saw all the sites, despite her handicap.

Rose is in a wheelchair but she didn't let that stop her! She was able to "go to the edge" of the canyon. God bless her!

She's a spokesperson for the park.

Cheryl joked with GMA saying that her mom is a spokesperson for the park now. As Rose says, "you're never too old to see the Grand Canyon!"

Rose Torphy is living proof that you're never too old to accomplish a goal.

She isn't the first person to make history late in life either. And I bet her family is so proud of her.

According to the Mirror, the oldest person to pass a driving test was at the age of 95.

"The oldest person to pass a driving test is the late Lord Renton, a Tory peer and former minister, who did so shortly before his 95th birthday in 2003."

Good things come to those who wait.

"The oldest male and female Oscar winners are Jessica Tandy, at the age of 80, and Christopher Plummer, aged 82" according to the site.

Temps drop to −43 °C at the North Pole — which would be crazy hard for anyone to handle. "But Dorothy Davenhill Hirsch, 89, became the oldest person to visit aboard the Russian Nuclear Ice Breaker Yamal in 2004."

The oldest person to complete a marathon was 92-years-old.

The oldest woman to date to complete a marathon was Gladys Burrill from Hawaii, who was 92 years old. She finished the Honolulu Marathon in under ten hours, earning herself the nickname “Gladyator."

A woman named Bertha Wood had her first book published on her 100th birthday in 2005.

The book is based on her memoirs, which she began writing at the ripe age of 90!!! Listen, it is NEVER too late to achieve your dreams.

The oldest person to travel in space was 77-years-old.

John Glenn made history at the age of 77 when he became the oldest person to travel in space. Guess you can say the sky's the limit.

What's the age limit to be a father?

"Indian farmer Ramjeet Raghav, became a dad at the age of 94 in 2010 when wife Shakuntala gave birth, aged 58, to their son Vikramjeet."

Guess not. The oldest woman to bear a child, according to CBS News is Daljinder Kaur. She was believed to be 70-years-old at the time. Many people in India don't know their exact age because they don't have birth certificates. The clinic she went to actually estimated her age to be 72.

The biggest curiosity of all is, who is the oldest person to have ever lived?

The Guinness World Records online says that title goes to Jeanne Louise Calment. She had lived for 122 years.

She was born in 1875 in France and saw the Eiffel Tower being built.

Talk about something to see. According to the site, this woman lived a quiet life — but notably a long one!

Apparently, she never worked a day in her life. Perhaps this contributed to her health.

She married a wealthy distant cousin, Fernand Nicolas Calment in 1896. "She was free to swim, play tennis, cycle (she was still cycling until the age of 100) and roller skate, all of which promoted excellent good health."

She did not need living assistance until 110-years-old! She then moved into a nursing home. Simply amazing!

What was this woman's secret? We all want to know!

Her diet was said to be rich in olive oil and she restricted herself to alcohol. But she did have a sweet tooth, with a "particular fondness for chocolate."

Suffice to say, I think it's obvious that her carefree life attributed to her long life. Not all of us have that luxury, but we can keep our dreams alive and eat chocolate.