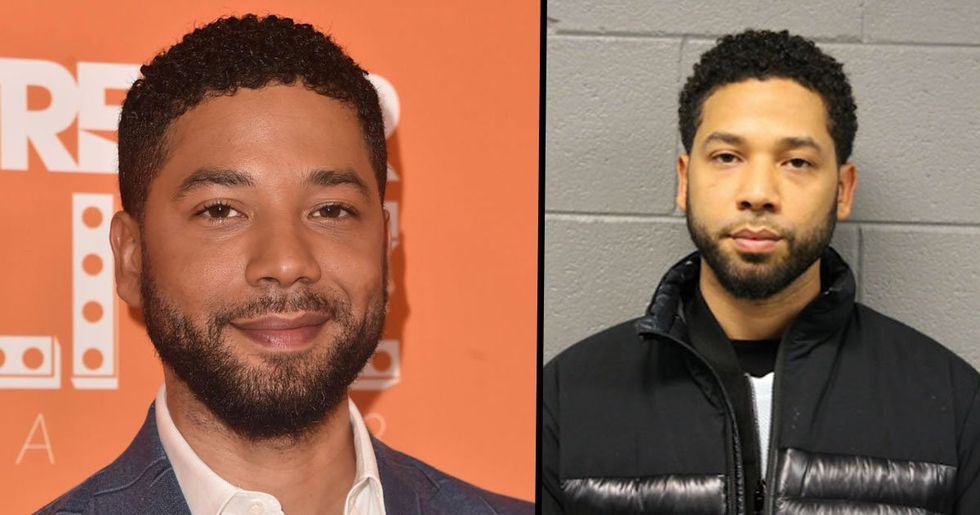 Empire is a Chicago-based TV show that centers on hip-hop music, a family-owned entertainment business, and the drama of the family as they fight for control. But now it looks like the drama of real life is eclipsing that of the show. Jussie Smollett has just been axed from Empire, and it doesn't look like he's going to be coming back any time soon.

In fact, Jussie Smollett has just been arrested and could face up to three years in prison. But does he deserve it?

Jussie Smollett has been acting since he was just 9 years old. Do any of you remember The Mighty Ducks? Well he was one of the kids in that. More recently he's garnered fame as the middle child, and openly gay son, of the hip-hop mogul, Lucious Lyon, on the show Empire.

He has been cut from the last two episodes of the season.

Jussie might be well loved in the role of Jamal, but his off-screen life has become a mess. He was arrested on Wednesday after he allegedly filed a false police report. At a hearing on Thursday, he paid $10,000 as a bond and handed over his passport.

Why was Jussie arrested?

It is believed that Jussie commissioned a hoax, which he then claimed was a hate crime. He recently reported that he had been attacked by two men who had screamed racial and homophobic slurs at him. There had been an outpouring of sympathy for him, including from notable names such as Viola Davies and Naomi Campbell. Now it looks like it was all a hoax.

Why would he do that?

Apparently Jussie was unhappy with his salary. He thought that raising his profile in this way would help him to negotiate a higher salary. Before you go feeling too sorry for him, he was being paid $65,000 per episode. As there were eighteen episodes in a series, that would be $1,170,000 for the season. It's hard to feel too bad for him when he's earned more in his five years at Empire than most of us will in a lifetime.

It wasn't just a one-time offense either.

In January, Jussie had sent himself a letter to Fox studios, which contained racial, homophobic and political language. It also contained some white powder, which was later confirmed to be aspirin. Three days before the attack he said that he had received an unidentified phone call in which someone used a homophobic slur against him.

He had it all planned.

On 29 January, two white men shouted racial and homophobic insults at him. They then punched him, doused him in bleach, and put a noose around his neck. Then they called out 'This is MAGA country.' When he went to see the police, he also had small cuts and bruises on his face, which the police believe were self-inflicted.

He paid two brothers to attack him.

Jussie Smollett: they beat me and poured gasoline on me and screamed “This is MAGA country” Chicago police : https://t.co/tOWXhySNnX
— two of a kind (@two of a kind)1550809207.0

The two men that attacked him were actually his friends, Ola and Abel Osundairo from Nigeria. They have both appeared on Empire before, plus one of them is his personal trainer and it is believed that Abel gave Jussie cocaine. The two men were apprehended by the police and it was revealed that Jussie had written a cheque for them for $3,500.

How did the police find out that it was a hoax?

Chicago Police Superintendent Eddie Johnson on Jussie Smollett: "I just wish that the families of gun violence in t… https://t.co/DVYcIOgSo8
— This Week (@This Week)1550855609.0

The police take hate crimes seriously. When it was first reported, they launched a full investigation. They interviewed more than one hundred people for this case, and they spent hours going through surveillance footage. It was a monumental waste of police time, especially when there are real crimes that need to be solved.

This was wrong on so many levels.

Jussie's claims were terrible for so many reasons. First and foremost, hate crimes are a serious and dangerous act and they threaten many people on a daily basis. In particular, having a noose placed around his neck was in incredibly bad taste. After the American Civil War thousands of black Americans were lynched due to racist motivations. This hoax will have dragged up many terrible memories and connotations.

Like most of you, I've seen the reports about Jussie Smollett, and I'm sad, frustrated, and disappointed. https://t.co/91OHOymShi
— Kamala Harris (@Kamala Harris)1550791386.0

Stepping forward and speaking up after a crime is a very tough thing to do. This act by Jussie could deter people from speaking out in the future, as they may fear that they will not be believed. It is also a terrible example to set for anyone. He thought that hate crimes could be used as part of a publicity stunt. It is an abhorrent and harmful idea.

At the moment Jussie is still claiming his innocence, but the police seem fairly certain of their discovery. If Jussie has committed this hoax, he could face up to 3 years in prison, and it would be hard to argue against that. On the other hand, the police hasn't always treated black people entirely fairly.

The jury is still out.

On the other hand, there is a huge discrepancy between the ways that people are treated based on their race. Ryan Lochte claimed that he was beaten up while he was in Brazil. Although it wasn't explicitly a hate crime, he was trying to suggest that an entire nation was dangerous.

Does the colour of Jussie Smollett's skin affect his case?

If Jussie Smollett committed this hoax, then it has been a terrible waste of police time and resources, as well as harming people in the future who may suffer something like this for real. But if he was white and had said that two black men had attacked him, would the police be treating this as harshly?