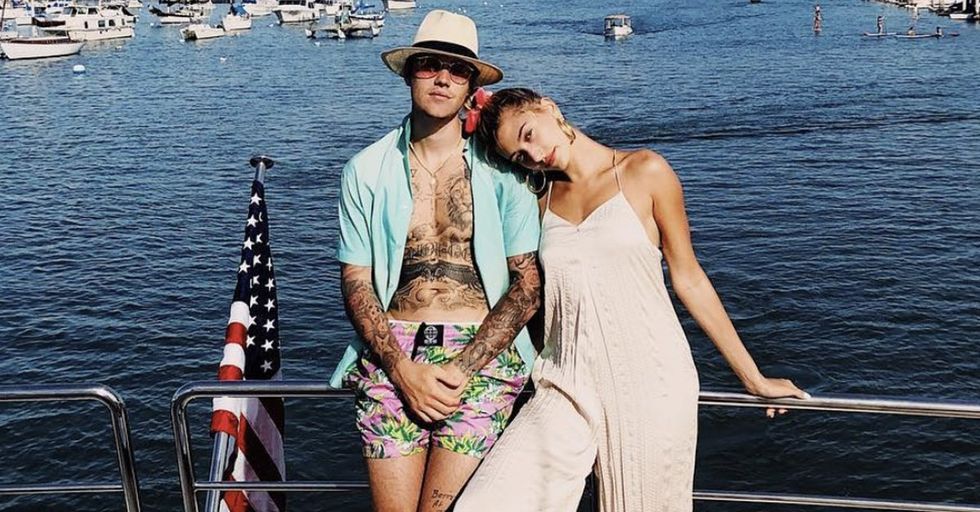 The world has been watching Justin Bieber and Hailey Baldwin's relationship since it began. It's part of being an international pop star, right? So of course, plenty of rumors about the state of their relationship managed to make the rounds, too.

Now, Justin Bieber himself is taking issue with one commentator's specific insinuation about his marriage to Hailey Bieber, nee Baldwin. Apparently, this commentator had been throwing out 'accusations' to make Bieber's marriage seem more petty than romantic. However, Bieber wasn't letting that one stand. Because while his relationship and marriage was all very whirlwind, Bieber wants to make it very clear that the feelings are real.

So read up on the whole thing: the comments that started this, and Bieber's swift response!

The couple got back together in May 2018 after a break and surprised fans with their fast pace thereafter.

And roughly four months after resuming their relationship in 2018, the couple got married.

Remember when the news broke?

Bieber made this big announcement back in July of 2018.

And before long, they tied the knot.

And if the Instagram-flirting is anything to go by, these lovebirds certainly look happy with the way things are going!

However, some fans disagree.

Despite Justin and Hailey's obvious affection, some fans are unwilling to give up on the history between Bieber and a former girlfriend of his, Selena Gomez.

So, rewind a few years.

Gomez and Bieber had an on-again, off-again relationship beginning all the way back in December 2010.

The pair separated in November 2012, only to reconcile a few weeks later. However, they definitively split again in January 2013.

There were multiple reunions and breakups after that.

Late in 2017, after Selena reportedly broke up with ex-boyfriend The Weeknd, she and Bieber got together again. They broke up once and for all in March 2018.

So that's that, right?

Well, yes. But some fans are still pretty fixated on Bieber and Gomez as a dream pair, and unfortunately, they're not shy about letting his wife know.

But Justin and Hailey also dated and broke up before tying the knot.

Rewind again, this time to 2015. In-between his relationship(s) with Gomez, Bieber dated Baldwin briefly from December 2015 to January 2016.

So all in all, they didn't date for that long.

But apparently, they made a lasting impression on each other because when the pair reconciled in May 2018 they were quite lovestruck!

And Justin was posting about the marriage by November 2018.

Although going by reports of the pair obtaining a marriage license in September, they probably married sometime around then.

But let's get to the 'controversy.'

Because Hailey and Justin had an interview with Vogue a couple of weeks ago and had a few things to say about their relationship and the way Justin's fans engage with them.

Hailey and Justin say they're all in.

The couple says they're deeply in love and committed to growing together, even speaking about going to therapy to learn how best to communicate with each other. "We’re coming from a really genuine place. But we’re two young people who are learning as we go," Hailey explained to Vogue. "I’m not going to sit here and lie and say it’s all a magical fantasy, but there’s something beautiful about it anyway — about wanting to fight for something, commit to building with someone."

Yet Hailey has to deal with Justin's fans, and that can get frustrating.

"The problem is kids become possessive over people and feel like if they think they're hurt, they feel hurt for them and they're hurt too, or whatever it is," she told Vogue.

Justin's fans get deeply concerned over his personal life.

To the point where they comment and pass judgment over whether they think Hailey should be involved in it. "They just think they know these people who are famous because their life is so exposed. And that's what gets me, I think, the most frustrated," she added.

And coming from a sea of strangers, this can be disconcerting for Hailey.

Because the only people who really know what their relationship is like are Justin and Hailey.

"What's really weird to me is they create scenarios in their head of what they think is happening, or what they think should happen, and I'm just like, 'This is just so dumb. It's so dumb'," Hailed remarked.

She gets a lot of discouraging comments on social media from such fans.

"I've found that I got to a place where I don't read the comments," she said. "People can just be mean, and I feel like if you don't want it to get to you, then don't read it and allow it to affect your soul."

Seems like the best way to avoid vitriol, right?

But Hailey still feels the scorn. "You still care to a certain extent," she added. "You really have to train your brain to be like, 'OK, why do I even care?' I don't know these people, they don't know me, they're not a part of my life or relationship."

And then, this happened:

Justin posted this photo to his Instagram, and one commenter wrote that he was "NOT in love with Hailey" and that he "only married her to get back at SG [Selena Gomez]."

Apparently, the commenter's whole account was named after their dislike of Justin and Hailey's relationship.

And for this particular comment (and fan), Justin had a few things to say about their assumptions concerning his marriage.

So he followed up with a comment of his own.

“You’re immature, the fact that you have an account dedicated to dissing my wife and I is absolutely absurd," Bieber wrote. "Why would I dedicate my whole life to someone in marriage to get back at my ex? Anyone who believes this is mean-spirited or 10 years old or younger because a logical person doesn’t talk or think this way, you should be ashamed of yourself."

He quickly set the record straight about himself and Selena, too.

"I absolutely loved and love Selena, she will always hold a place in my heart. But I am head over heels in love with my wife, and she is absolutely the BEST THING that has ever happened to me, period," Bieber continued.

And he left more opinionated fans with this bottom line:

“This is a reply to all immature sick people who send Hailey hurtful messages like, ‘He always goes back to Selena,’ or ‘Selena is better for him,’ YOU HAVE NO IDEA ABOUT MY LIFE AND WHAT'S GOOD FOR ME!!," Bieber wrote.

He seems pretty adamant about that.

He also reminded potential critics of the golden rules we all learned as kids.

"If you were raised right, your parents would have said: ‘If you don’t have something nice to say don’t say anything," Bieber pointedly wrote.

So he and Hailey definitely aren't taking any of that baseless criticism into consideration!

Good for them, at least. And it sounds like they're asking for a little more respect from fans--even those who were ride-or-die Justin/Selena supporters.

And let's hope this helps in preventing a bunch of judgemental comments Justin and Hailey would have kept getting about their marriage, otherwise! What do you think of all this? Share the story with other fans of the Bieber clan!