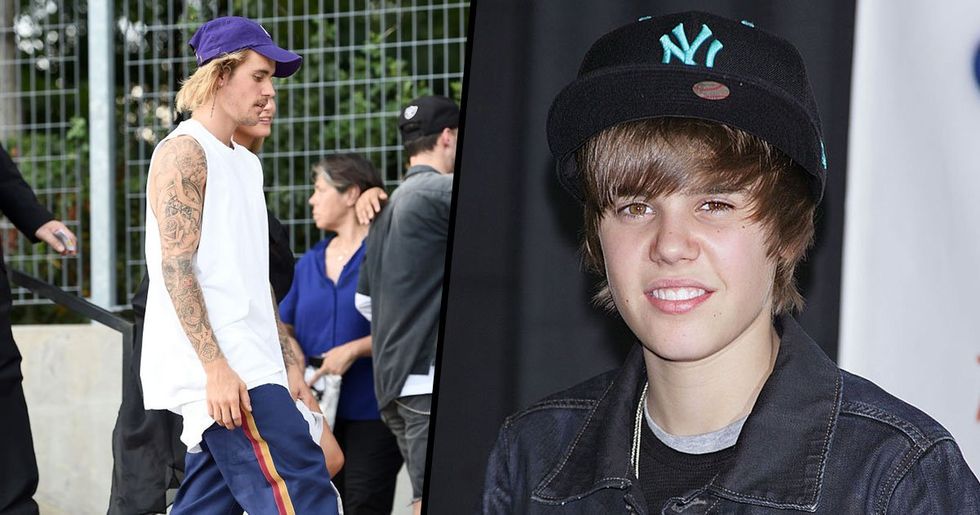 It seems like overnight, singer, Justin Bieber, went from a teen who posted covers on YouTube to a global sensation and hit-producing machine.

The singer has certainly enjoyed the luxuries of his music career, and, of course, has the smash hits and a dedicated fan-base who keep coming back for more to show for it.

Although we all know how the story goes when someone gets famous when they're young - let's be honest, all that stardom at such a young age is bound to take its toll. But, for Bieber, his career has been rife with controversy, partying, scrutiny from the tabloids, and brushes with the law.

Today, the star had penned a lengthy Instagram post going into detail about his struggles with fame, which have caused his mental health to plummet to rock bottom and seen him turn to hard drugs to cope.

Justin Bieber was discovered at the tender age of thirteen.

The then-untrained Canadian singer put down his singing roots on YouTube, uploading covers to the popular platform.

Born on March 1, 1994, in Stratford, Ontario, Canada, to a single mother, Bieber was completely unknown on the music scene until he started uploading singing covers to his YouTube.

Now twenty-five, thanks to the likes of his record-breaking music sales, merchandise, and sell-out tours, the star has an eyewatering net worth of $265 million as of March 2018.

His career has been rife with controversy, offensive behavior, brushes with the law and an all-around "going off the rails" attitude.

The twenty-five-year-old has opened up about his struggles with stardom in a deeply honest essay.

The star starts off by reflecting on his life with celebrity status.

The singer explains that his life in the spotlight left him feeling overwhelmed. Posting a text image, the "What Do You Mean?" singer wrote: "It's hard to get out of bed in the morning with the right attitude when you are overwhelmed with your life, your past, job, responsibilities, emotions, family, finances, relationships."

The singer admits that he would get to the point where he didn't even want to live anymore. "A cycle of feeling disappointment after disappointment. Sometimes it can even get to the point where you don't even want to live anymore." He continued: "Where you feel like it's never going to change... I can fully sympathize with you. I could not change my mindset. I am fortunate to have people in life that continue to encourage me to keep going."

"No rationality, defiant, rebellious, things all of us have to go through. But when you add the pressure of stardom it does something to you that is quite unexplainable." He then goes on to reflect on his childhood. "You see, I didn't grow up in a stable home, my parents were eighteen separated with no money, still young and rebellious as well."

The star says he massively struggled throughout his teenage years.

"I never learnt the fundamentals of responsibility."

Bieber explains that becoming famous so young meant that he never learned the art of good decision-making. "So by the point I was eighteen, with no skills in the real world, with millions of dollars and access to whatever I wanted... This is a very scary concept for anyone." He continued: "By 20 I made every bad decision you could have thought of and went from one of the most loved and adored people in the world to the most ridiculed, judged, and hated person in the world!"

He found the ups and downs of performing difficult to cope with and did what many other touring bands do... drugs. "You notice a lot of touring bands and people end up having a phase of drug abuse and I believe it is due to not being able to manage the huge ups and downs that come with being an entertainer. "I started doing pretty heavy drugs at 19 and abused all of my relationships. I became resentful, disrespectful to women, and angry." He continued: I became distance to everyone who loved me and I was hiding behind a shell of a person that I had become. I felt like I could never turn it around."

"It has taken me years to bounce back from all of these terrible decisions, fix broken relationships, and change relationship habits." The star then went on to gush over the marriage his wife, Hailey Bieber. "Now I am navigating the best season of my life 'MARRIAGE' !! Which is an amazing, crazy, new responsibility. "You learn patience, trust, commitment, kindness, humility and all of the things it looks like to be a good man," he wrote.

He finished off his lengthy post with a nod to his Christian faith.

"Even when the odds are against you keep fighting. Jesus loves you. "BE KIND TODAY. BE BOLD TODAY AND LOVE PEOPLE TODAY NOT BY YOUR STANDARDS BUT BY GOD'S PERFECT UNFAILING LOVE." Sadly, Bieber is far some the only child star to have seemingly "gone off the rails." Keep scrolling as we look at twenty former child stars who fell on hard times.