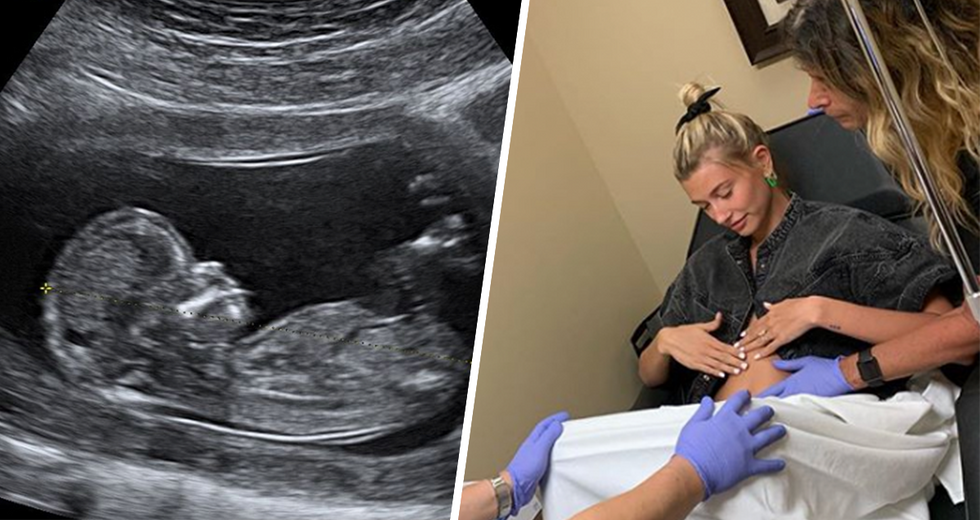 Justin Bieber loves to rile up the internet and cause speculation. First, it was his surprise engagement to Hailey Baldwin in July of 2018, and then their secretive did-they-or-didn't they wedding that followed. The two clearly enjoy staying at the center of the spotlight.

First, he posted this sonogram image:

Immediately, people began commenting, "Congratulations!" and "OMG!" His fans got majorly excited about the prospect of a Bieber-Baldwin baby. TBH there is a 99.999% chance that's a gorgeous kid.

Justin clapped back at the commenters claiming this was a fake sonogram meant to prank us by saying "If U thought it was April fools..." In the photo, Hailey looks to be in a doctor's office with her stomach protruding. There is a man who looks like a medical professional at the end of the bed, holding her knees, and a woman who also looks to be a medical professional at her bedside. Hailey's making a surprised expression.

In this next one, Hailey's face looks more serene, as if she is excited about the upcoming pregnancy.

And in this last one, her fingers delicately rest on her growing bump.

But is this all an elaborate joke? Or is it real?

We decided to do a bit of investigating on our own, so like any good internet sleuth, we tried a reverse Google image search. And voila!

Justin's sonogram picture came up... except it wasn't actually Justin's sonogram. It was just a stock sonogram! Which made us think... the baby in that image looks pretty big, but Hailey's stomach in the earlier photos looks pretty small. What is going on here, people?!

Only 6 days ago, Justin posted this photo of Hailey in her underwear:

This does not look like a pregnant woman to me. Especially not one with a sonogram baby of that size! Hmmm.

Similarly, on March 6th, he posted this photo of her, looking impossibly flat-stomached and toned in workout leggings and a crop top:

And then our prayers were answered! Justin blasted out a new sonogram pic!

And, well... it was a dog. I guess Bieber was, in fact, pranking us. Darn it. The final photo in the series is a sonogram photo with a puppy in it. And honestly, even though it's not a human baby, it's pretty cute. But was it in poor taste? Some people thought so.

Some commenters were disappointed.

Others seemed to be slightly relieved it was a fake baby.

After all, the couple only just got married. They should enjoy being newlyweds, right?

It's tough to get a read on whether she was unhappy about the whole prank, or unhappy that the baby was fake.

But many feel that fake pregnancy announcements in general are in poor taste.

For couples struggling with infertility, going through a miscarriage, or who are in the midst of IVF, announcements that make light of pregnancy can feel like a gut punch.

She noted that many women struggling with infertility don't look at social media at all on April Fools Day for this very reason.

Many other women agreed with the sentiment, saying things like this:

@Nicole_Cliffe Yup, when I was struggling with infertility this REALLY SUCKED.
— Amber Sparks (@Amber Sparks)1554133897.0

My heart goes out to all the people wishing for children, unable to have them. It must be so hard for people to act like a pregnancy announcement is a joke.

Baby or no baby, we wish Justin and Hailey the best.

Justin and Hailey have recently given interviews for Vogue and appeared on its March cover. They talked about their relationship's sweet beginnings and rough endings. But the highlight of the whole interview was the fact that they'd decided to stay celibate together until marriage. It had to do with their shared religious beliefs and Justin's previous problems with sex. They also admitted that marriage is difficult and it's not as magical as society makes it look.