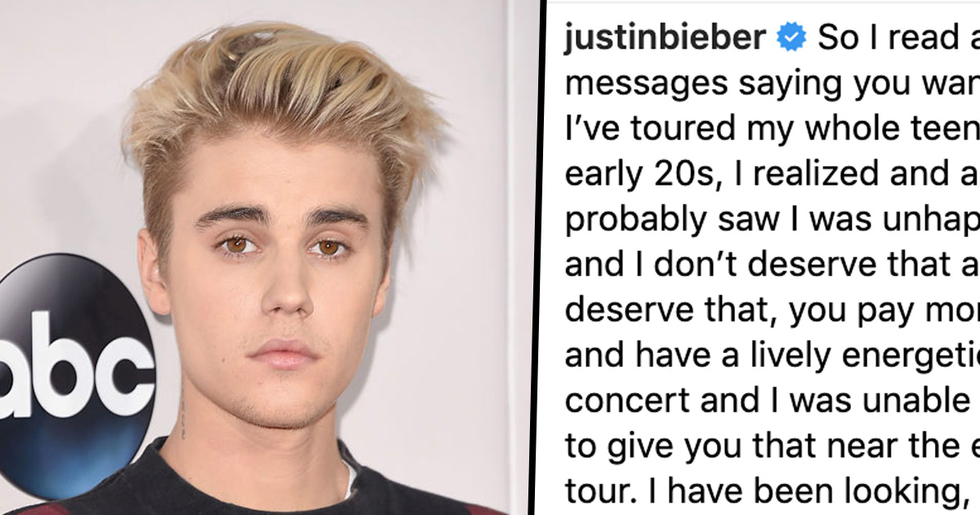 Justin Bieber has been wowing the world with his musical prowess and sensational singing for nearly a decade now, and his popularity has gone from strength to strength.

But his personal life is another matter entirely.

Bieber has been honest in the past about his drug addictions and mental health issues, but his latest post has really tugged at the heartstrings of his fans and left us feeling shocked to the core.

Not to mention, the massive hint that he dropped about his future with Hailey.

Justin Bieber first rose to fame way back in 2009.

He was a fresh-faced teenager with the world at his feet. He started posting his music on YouTube when he was only 12 years old and, less than a year later, he was signed to a music label.

But no-one could have predicted quite how successful he would turn out to be.

And he is not just a pop prince as many believed him to originally be.

Bieber has turned his hand to RnB, Latin, Hip-Hop and Electronic Dance, all with huge success.

And we all remember back in the day when he was dating the gorgeous Selena Gomez.

Jelena Forever. Love it! They just looked so darn cute together.

But even though he looked like a baby-faced angel, his behavior was far from squeaky-clean.

In January 2014 Justin was arrested on suspicion of driving under the influence, driving with an expired license and resisting arrest. How could a face this innocent be guilty of anything?

But at least he was honest about what he had done!

At the time of the incident, Bieber admitted to the police that he had drunk alcohol, smoked marijuana and taken prescription drugs. All he needed was a hooker in the backseat for a full house!

And then a few months later in September, he was arrested again.

He was charged with dangerous driving and assault after a collision with a minivan in his hometown in Ontario. Naughty boy.

He was also a big fan of the ladies.

Justin has also admitted to going through phases where he was, to put it nicely, a bit promiscuous. Something that he was very ashamed of at the time. Apparently.

His manager later revealed how worried he had been about Justin's problems with substance abuse and his mental health.

Scooter Braun said; "There was a time when I would go to sleep almost every night - when he had the money to fly away from me - and I was worried every night that I was gonna lose him."

Although he promises that he is now clean, Justin's bizarre behavior last September got fans speculating again.

He was spotted noticeably shaking and twitching as he met fans on the street of New York, sparking even more concern for his state of mind.

Justin has since opened up about those dark times in his life.

In an interview with Vogue earlier this year, Justin admitted that he was addicted to Xanax and used the drug to numb the feelings of shame that he felt about his rock 'n' roll lifestyle.

He also admitted he was seeking help for his ongoing battle with depression.

Justin revealed that he was going through a difficult time mentally and that he had sought help for this. He started to receive treatment for his depression. Depression is most definitely a b*tch.

He even chose to push back his wedding to Hailey due to his ongoing mental health problems.

Friends of the pair revealed that they will have a wedding ceremony eventually but at the moment Justin is focusing on getting his mental health back on track.

Luckily for Justin, Hailey is apparently helping him every step of the way.

Justin is not shy about sharing his love for Hailey, saying that she is his rock and that she does nothing but help him. He has even gone as far as to say he would be "lost" without her.

But she has admitted that it is hard being married to someone who suffers from depression.

Pals of Hailey have shared just how deeply it has affected her, saying; "It is very hard for Hailey to watch him suffer from the depression. She loves him dearly and hates to see him in pain."

And in response to this, Bieber has promised to work hard on himself for the sake of their marriage.

A source has revealed that Bieber "wants to be the best possible husband for Hailey" and that he has made sure that he doesn't miss a single one of his therapy sessions.

But fans are more than concerned about his recent disheveled appearance.

Which leads us to wonder whether he is properly taking care of himself or whether he has just lost interest in how he looks and goodness knows what else... He certainly doesn't look like someone who has got their sh*t together.

And then there was his recent post about feeling disconnected.

Is this is from his fans? His family? Or maybe the world in general? We don't know, but we do think he looks like he needs some help. ASAP.

And devastated. Although we do believe it is for the best. For him at least.

Justin revealed yesterday that he will be taking a step back from his music.

He went on to explain that he will be focusing on his mental health, saying; "Music is very important  . . . Nothing comes before my family and my health.: We agree, Justin!

His post comes in response to requests from fans for a new album, especially in light of his manager's recent tweet hinting that one will be made this year.

Although Justin is very obviously not in the right frame of mind mentally to give his fans what they so clearly desire. He said; "I've toured my whole teenage life, and early 20s, I realized and as you guys probably saw I was unhappy last tour and I don't deserve that, and you don't deserve that."

He also hinted that a family may be on the cards sooner than we think.

Saying; "I am now very focused on repairing some of these deep-rooted issues that I have as most of us have so that I don't fall apart so that I can sustain my marriage and be the father I want to be."

Oh my god! Does this mean that Hailey is pregnant?

Hailey has recently said on her plans for motherhood; "I love kids and I can't wait to have my own. I would say that now, that's a closer reality, but definitely not anytime soon." Could it have happened quicker than she initially planned?

Bieber ended this shocking post by promising to be back to his best as soon as possible.

"My swag is undeniable and my drive is incredible his love is supernatural his grace is that reliable . . . the top is where I reside period whether I make music or not the king said so, but I will come with a vengeance believe that." We really hope this is the case.

As do his legion of fans and supporters.

Many are praying for a speedy recovery for the star and just want him to take the time he so obviously needs to get better.

Hopefully, the many messages of support will help with his recovery.

Health and happiness are two of the most important things in life so we really hope that Bieber manages to find both. With all this support from his family and fans, we think he's got as good a chance as anyone.

Although some are torn between their love of his music and his need to take a timeout.

I feel so bad for wanting Justin Bieber to release a new album after reading his latest instagram post
— ★folklore★ (@★folklore★)1553542659.0

We feel their pain, but no-one wants to see another Amy Winehouse type tragedy, so we are firmly behind Bieber's decision to take a step back.

He is also being praised for raising awareness of mental health issues.

got respect for justin bieber publicly sharing that he has issues and he needs to take time to himself to figure it… https://t.co/dIPD84Fn3G
— steph (@steph)1553601455.0

Good on Bieber for not being ashamed to admit that he is struggling! Mental health is finally starting to be taken seriously and any high profile case can help and will help those who are currently struggling themselves.

The Beliebers will never give up on him.