Justin Bieber's Car Broke Down in the Hood, Locals Made Him Do Push-Ups in Street | 22 Words 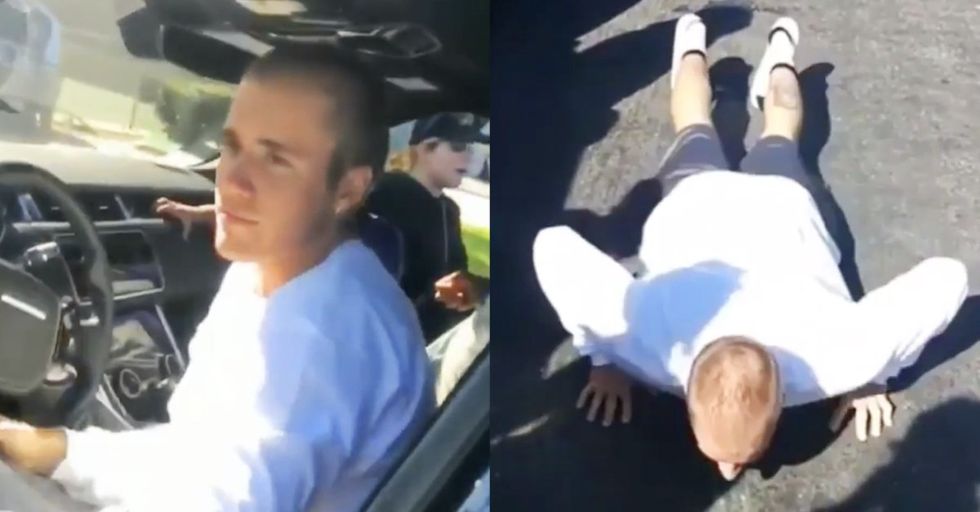 Justin Bieber's Car Broke Down in the Hood, Locals Made Him Do Push-Ups in Street

Everyone knows Justin Bieber is a super down-to-earth celeb. Okay, that might have been a little bit of sarcasm. The Biebs has certainly gotten flack for going a little too wild in his past, but those days are behind him. And I mean, come on, his fame started when he was basically still an infant.

We can't fault the guy. It's hard to stay grounded when you became a millionaire before your 21st birthday. I'm sure we all can relate. But Bieber hasn't lost his down-to-earth chill personality entirely. This weekend, a few lucky fans had an opportunity to meet Bieber in person when his car broke down.

Justin isn't known as the most accessible celebrity.

Maybe stars aren't like us after all. But Bieber's "persona" might be changing a little. Especially since this weekend, he took some time to hang out with fans, play a little basketball and even got some exercise.

Yesterday Bieber became a man of the people when he was spotted in downtown Los Angeles doing pushups and playing basketball with some of the locals.

Over the weekend, his car broke down in the Watts neighborhood of LA, and he made the best of a bad situation. Instead of Lifting the heck out of there like I would have done, Bieber took time to meet with fans and have a little fun.

He even gave them a mini-concert!

Okay, maybe concert is pushing it, but watch until the end of this Instagram video and you'll get a little taste of what these Angelenos were treated to this weekend.

Bieber was even challenged to do some pushups!

And I mean hey, when you're that famous, you can never be too in shape. Now if only my car broke down in the middle of no-where more often, maybe I'd be in as good of shape as him.

@BENHONCHO They got a free concert a nba celebrity game and they added push ups for no reason
— ✰ًchris✰ (@✰ًchris✰)1541335452.0

And who wouldn't be! Bieber knows how to put on a show, that's for sure. Maybe we'll see a little of this newly discovered talent of his on his next world tour.