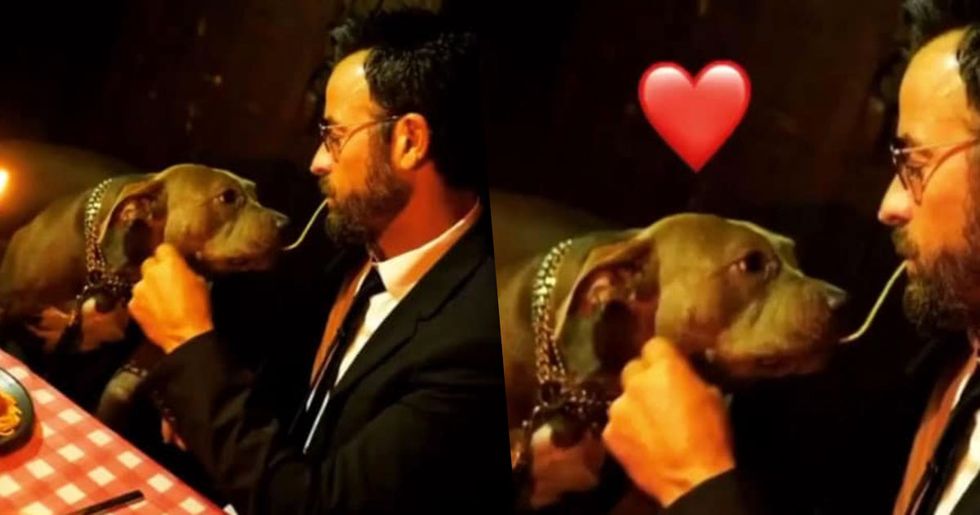 As a celebrity, there's probably an awful lot of pressure to attend glamourous events such as premieres and red carpets with a date.

With the hundreds of cameras on you all at once, it's important to look your best and make sure your date also looks immaculate.

Newly single, Justin Theroux decided to ignore the usual standards of Hollywood premieres this year by taking his very own beloved dog as his date to the Lady and the Tramp premiere this week.

Justin Theroux is all kinds of perfect.

The forty-eight-year-old actor is best known for his appearances and roles in movies such as American Psycho (2000), Charlie's Angels: Full Throttle (2003), and The Girl On The Train (2016).

The pair married in 2015, but after over a decade of being together, they divorced earlier this year.

And he has been keeping himself very busy with a live-action remake of Disney's Lady and the Tramp.

Theroux plays the role of the stray Schnauzer dog...

And the movie tells the love story of the stray falling in love with an upper-middle-class Cocker Spaniel, who is voiced by Tessa Thompson - just like in the original 1955 Disney movie.

Lady and the Tramp premiered in New York this week, and the event went down an absolute treat.

His date turned out to be his rescued Pit Bull, Kuma.

They make an adorable pair.

And Kuma was on her best behavior throughout the entire premiere.

But rather than sitting back and enjoying the movie...

Theroux literally spent the entire evening documenting Kuma's "reactions" and "thoughts" to the movie which was both hilarious and bizarre.

But Kuma soon caught onto the plot...

She realized the movie was all about dogs which instantly grabbed her attention!

We are all thinking the same thing, Kuma...

She even experienced a little bit of trauma...

So it looks like the Dog Catcher is making a return in the re-make.

Kuma even needed a water break...

And make it a double.

But in typical doggy fashion...

Theroux took Kuma out for a pee break...

Which gave her time to reflect further on the movie.

The pair soon returned from their toilet break...

And Kuma was quickly swept up in the love story.

"The best movie ever made in the entire world..."

The movie got Kuma in the mood for some spaghetti...

And that's exactly what the pair did after the premiere.

Not only did Theroux fulfill his promise of getting spaghetti...

He reenacted the iconic Lady and the Tramp spaghetti scene!

So according to Kuma, the movie is pretty amazing.

Lady and the Tramp will be released on Disney+ on the 12th of November this year.