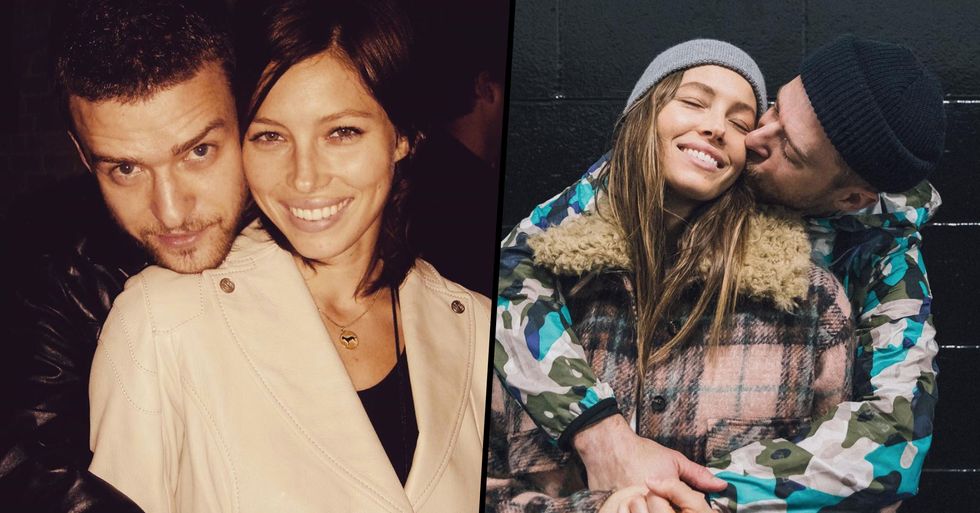 After a rocky few months, Justin Timberlake and Jessica Biel are reported to have welcomed their second child, and it seems there were lot of clues we missed along the way...

Justin and Jessica are easily one of the most famous Hollywood couples, but it hasn't exactly been an easy ride...

The pair began dating in 2007 before tying the knot in 2012, but in recent years they have been embroiled in some serious relationship drama.

The pair first clapped eyes on each other at a birthday party Justin was throwing for one of his friends in early 2007.

According to Us Weekly, Justin then called Jessica on the phone to ask her out, and of course, she said yes.

The pair were regularly papped together.

And just a few months into dating, they went public, with the Daily Mail sharing photos of them kissing in the U.K.

For the most part, they managed to keep their relationship out of the public eye.

But, a recent incident catapulted them into the spotlight... and not for the best of reasons.

Justin and Jessica have always put on such a strong front.

And there was really never any questions about their loyalty to each other.

But things haven't gone too well in recent months...

It seems this couple might not be the relationship goals everyone thought they were.

After the singer had made such a big deal out of Britney Spears cheating on him back in the day, the public instantly began calling him out as a hypocrite.

Justin was certainly not a good ex to Britney.

When they broke up in 2002, Britney tried to minimize public speculation by saying they'd decided to mutually split. Justin then made assertions that Britney had been getting close to her choreographer.

He then went on to write "Cry Me A River" as a diss track and later released "What Goes Around... Comes Around" years later when Britney announced her divorce from Kevin Federline.

Many critics considered the track to be another diss toward Britney.

And one that overall, seemed pretty unnecessary.

Wouldn't it be some shit if after the way Justin Timberlake dragged Britney publicly for cheating, he is now doing… https://t.co/fpYDkIkfzQ
— Stephanie K (@Stephanie K)1575493040.0

Those who remember his past with Britney are pretty sure he's willing to throw other women under the bus to save his reputation.

And obviously, the whole scandal with Alisha Wainwright added some extra salt to the wound.

On the set of Palmer, the 2 were seen spending some "quality time" with each other, which then led to spending more time outside of working hours.

Yep, they were seen holding hands under a table while on what looked to be a "date."

But apparently, it was a just casual night out for a few drinks...

Justin really messed up that time...

It was so bad that he was even forced to address the whole thing in a lengthy Instagram post.

He told us all he was going to be focussing more on his family and his "amazing wife."

But regardless of his previous scandals, it seems as though he and his wife have managed to work through their problems.

And now, news has emerged that the pair have welcomed their second child.

Justin and Jessica already have one son together.

Their eldest son is called Silas and is currently 5-years-old, but he became an older brother to the newest member of their family.

Impressively, it seems as though Jessica managed to keep her pregnancy a secret.

According to The Daily Mail, she had been pregnant since March (yes, while Timberlake was having an alleged fling with Wainwright!) and has now given birth to a beautiful baby boy.

The outlet reported that there have been clues all along the way...

Starting with the fact that Jessica hadn't posted a full-body photograph of herself since March, after her birthday bash.

And then secondly, Jessica's mom, Kimberly Conroe Biel, has put her life on pause to spend more time with her daughter...

Especially these past couple of weeks.

And while the couple haven't been discussing their relationship recently...

They have been spending their time on social media trying to raise awareness for other important issues such as Black Lives Matter.

But, of course, we all want to know for definite whether the pair have welcomed a second child or not.

Well, it looks like we may finally have some answers as Justin's friend and collaborator, Brian McKnight, casually confirmed that his friend had welcomed a new baby during a recent interview.

"Having kids and having his family, I think [Justin] took some time to focus on those things because those things are very important," he revealed. "I think if he’s going to do music, he’s going to make sure that that's secure, and then he'll bring us into his music."

"And being inspired! He just had a new baby. I think that's going to be really inspiring for him and he'll have some new music based on that, I'm sure."

As of now, the couple is yet to confirm the news.

If you think Justin and Jessica have had a turbulent relationship, then keep scrolling to see how the latest scandal between Jada and Will Smith is taking the world by storm...