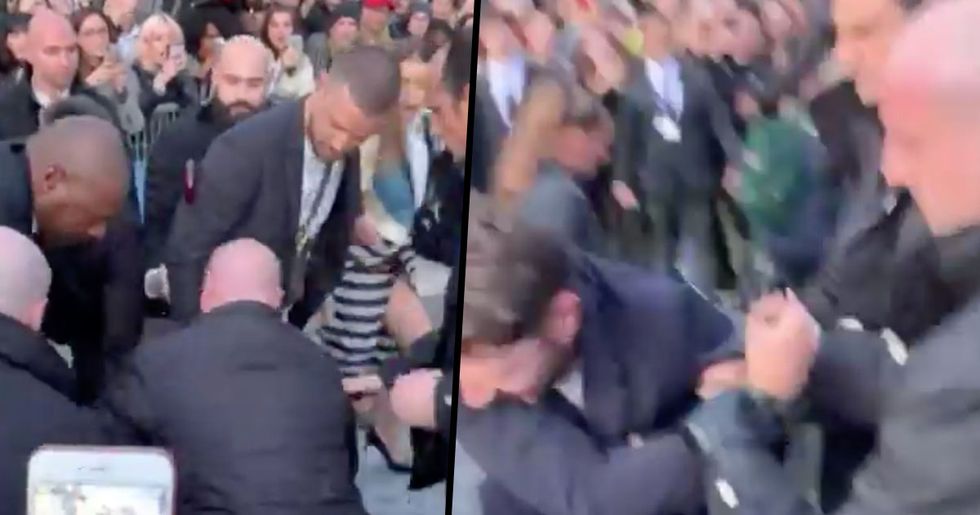 Yesterday marked the final day of Paris Fashion Week - a major fashion spectacle in which high profile A-listers from all over the world flock to the city to view the latest offerings from the biggest high-fashion houses in the business.

Justin Timberlake and wife, Jessica Biel, were amongst the star-studded guests in attendance. But the fashion-focused event hasn't lived up to its glamourous expectations for Timberlake after he was attacked on the way to Louis Vuitton's Summer 2020 show.

He's the latest celeb to fall victim to the notorious, controversial prankster, Vitalii Sediuk, who targeted the singer and attacked him outside the venue.

Keep scrolling to learn more about Sediuk's other celeb targets and to see the pictures of Tuesday's incident.

The thirty-year-old Ukrainian journalist boasts a growing list of A-listers who have fell victim to his stunts.

He usually targets celebs at film premieres and award ceremonies.

The former media reporter used his press-status to gain access to celebrities and physical assaults them, though he sees it as a "prank."

But it isn't always laughed off...

His controversial stunts have landed him in trouble in the past and have wreaked havoc at major events. Let's be honest, it's assault and is an extremely serious matter.

In 2016, the prankster manhandled supermodel, Gigi Hadid, in Milan.

As she walked to her car, Sediuk grabbed her from behind and tried to lift her up.

But the supermodel fought back.

She lashed out at the man, saying she had "the right to defend herself."

But it seems there was a deeper meaning to his stunt, apparently...

He explained he carried out the prank in protest at Gigi and her fellow model friend Kendall Jenner being considered "high fashion," while also making a dig at American Vogue editor Anna Wintour.

Taking to Instagram, he wrote: "While I consider Gigi Hadid beautiful, she and her friend Kendall Jenner, have nothing to do with high fashion. By doing this I encourage the fashion industry to put true talents on the runway and Vogue covers instead of well-connected cute girls from Instagram.

"You can call it a manifest or a protest. This is also a wake-up call for Anna Wintour who turned Vogue into tabloid by putting Kardashians and other doubtful celebrities on a cover of a well-respected magazine."

Another of his so-called "pranks" caused chaos at the 2014 Cannes Film Festival.

The incident saw him race to the red carpet and crawl underneath the dress of actress, America Ferrera. According to The Hollywood Reporter, the actress seemed initially unaware of the man hiding in her dress, but Cannes security quickly took charge, dragging Sediuk out from under the garment and off the red carpet. He was later arrested.

The red-carpet appears to be a popular place for Sediuk to act out his intrusive stunts.

He was once slapped by actor, Will Smith after he attempted to kiss him on a red carpet, while on another occasion he aggressively hugged Bradley Cooper in the crotch at a premiere.

He also stormed the Grammys stage during Adele's acceptance speech in 2013...

...before getting dragged off by security - a feeling he must know all too well. The gatecrashing caused him to spend the night behind bars.

He was also arrested for attacking Brad Pitt and Angelina Jolie.

The couple was attending the 2014 Maleficent premiere, when Pitt was allegedly hugged and then punched in the face by Sediuk, but was not seriously hurt.

Sediuk was then wrestled to the floor and handcuffed.

He spent 2 days in jail following the incident.

There seems to be few celebs who've managed to avoid an encounter with him.

From Kim Kardashian to Madonna, Miranda Kerr to Ciara, his attacks have frequently landed him in the headlines.

It's utterly shocking that this guy still managed to gain access to these events...

It's becomingly a disturbingly "normal" spectacle to see him being dragged off red carpets around the world. When will this guy stop?

Well, it looks like it won't be anytime soon...

The star was on his way to the Louis Vuitton Summer 2020 fashion show yesterday...

Timberlake, along with his wife, Jessica Biel, were outside the venue when Sediuk got up to his usual antics.

In a scenario all too familiar, the thirty-year-old attempted to grab the singer's leg from behind and tried to pull him down. That is until security came swarming in and managed to get him off of Timberlake.

Justin was not physically harmed following the stunt.

Justin held Jessica's hand the entire time, and she looked pretty surprised by the incident. But, the couple seemed to remain unphased as they continued walking into the event.

But, as you can imagine, the prankster has been slammed for his continuous celeb assaults.

After showing no signs of slowing down, he's found himself at the center of bad press, and rightly so.

But, he took to Instagram to settle the score, claiming he didn't "attack" the singer...

He turned the whole thing on its head, writing that he was the target of a homophobic attack, and that before the media want to label his "prank" as an "attack," he wants to show them what such an ordeal truly looks like. Although a homophpic attack is utterly horrific, there's no justification for his continual ambushing of celebs.