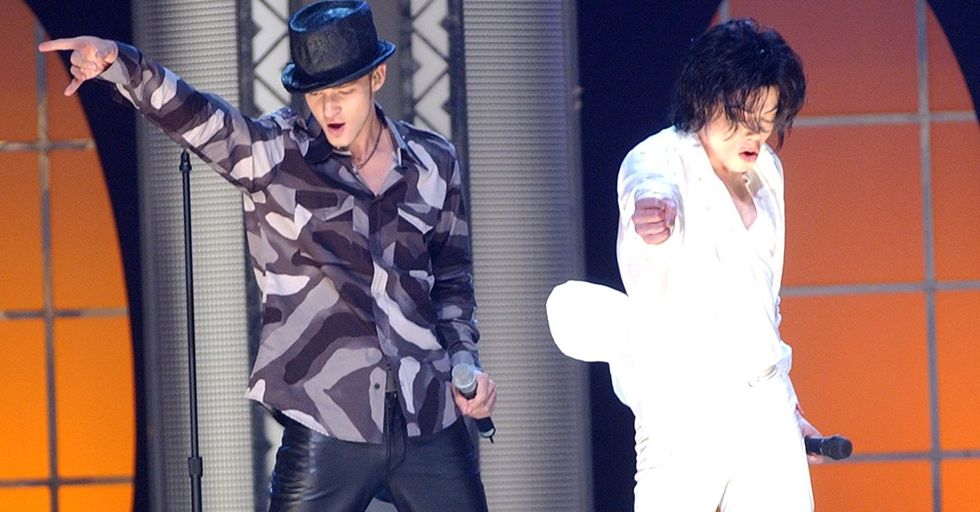 Let the flame wars begin. This hot-take is brought to you by the poster of Justin Timberlake that used to hang in my bedroom. Okay, but seriously folks. We think we've laid out a strong argument for why the King of Pop should be de-throned. Well, ten strong arguments to be specific. And we'll break them down bit by bit until the end when you rage-exit this article and send us a couple of Facebook messages telling us we're idiots. And if that's the case, we've failed you.

I know you're sitting back with your arms folded thinking, "there's literally no way Justin Timberlake is better than one of the greatest recording artists of all time," and maybe you're right. But like I said, we've got 10 solid reasons to explain why he is. Would Justin agree with us? Well, I tweeted at him to find out, and he blocked me. So I guess that's my answer.

Okay, let's start off with an easy one. No one's saying MJ can't act. We've all seen the first (what feels like) hour of the Thriller music video. The man is fine. But Justin... Justin has worked with some of the best directors out there.

Not to mention he started his career alongside Academy Award nominee Ryan Gosling.

This is not a drill. Someone needs to put them in a movie together, like, yesterday. Can you imagine a world where Damien Chazelle replaced Emma Stone's character in La La Land with Justin Timberlake and we got the ultimate gay LA musical? I can, and that world is amazing.

Seriously, the man's worked with the greats.

He's worked with the Coen brothers, David Fincher, Aaron Sorkin, Clint Eastwood, and even Woody Allen. That's a pretty impressive lineup. I don't care if Michael Jackson was in The Wiz, it doesn't make up enough ground! Points go to Timberlake.

Okay, awards aren't everything, we know that. For example, here's a picture of Michael Jackson, Quincy Jones, and like a thousand Grammys that seems to contradict our point. But while Jackson won a staggering 13 Grammys while he was alive, Timberlake is right behind him with 10. Plus, he's got 4 Emmys to his name, making him halfway to an EGOT.

Seriously, the guy was winning Grammys when he looked like this!

How? Literally, no one knows. Was this entire article just an excuse to share this photo with more people? Maybe.

But the point is, based on a pure numbers game, Timberlake is in the lead (and I don't think Jackson's gonna catch him).

And yes, I know that doesn't take into account other awards that no one cares about. But MJ never won an Oscar for his work in Captain EO, and we think Timberlake's Emmys are important. No one cares about Jackson's American Music Awards because honestly, does anyone even watch that?

3. The most damning evidence – Jackson's own music.

Let me explain. It's 2014, and the nation has already mourned Michael Jackson's death. But then... on the horizon. A new album. An album of brand new Michael Jackson music! Music that he was working on before he died.

Do you want to know the best part of that album? Yeah, it's the song with Justin Timberlake on the track.

Just try to tell me that anything else on XSCAPE is worth listening to. But his "collab" with Timberlake sent another Michael Jackson song to the top of the charts, making Jackson the first and only artist with Billboard #1s in five different decades.

And to all those saying "that's unfair"...

You're right. But trying to compare Justin's music to Michael's music was always going to be a losing argument, and this was the best I could do. The article's not titled "This is why Justin Timberlake's music is better than Michael Jackson's" after all.

4. The spiciest of meatballs.

And yes, that was an innuendo. This one is up for debate, but since several people from my childhood thought I was gay, I think I can be an authority on this. JT is just hotter.

See what I said? Spicy Meatball. We tried to make both artists look as attractive as possible. Unfortunately for Jackson, that means mostly older photos (of which there aren't ton-o-sexy ones).

And look. We know Justin has had his fair share of bad looks.

But we think he's settled on something pretty decent. Thank God. Another decade of weird-fro Justin would have been actual torture. He must have had to alter the very DNA of his hair to get it to do what it's doing now. And we know that's not how DNA works – that's how impressive this hair-transformation is.

This is the part of the show where we take a moment to appreciate the better halves of these two celebrities, with a not-so-in-depth look at celebrity relationships.

Guys, Justin Timberlake, and Jessica Biel have been together for 12 years.

And if that's not the cutest darn thing in the world of celebrities, I don't know what is. Everyone knows celebrity relationships are as fragile as Donald Trump's ego, and that's what makes this relationship special.

Not to knock Michael, but...

His marriage to Lisa Marie Presley is kinda cool, but it only lasted two years, and she went on to marry Nicholas Cage afterward.

JT's stints on SNL have all been highlights. Even during some of the down years of SNL, a shiny Justin Timberlake dressed up in a mattress can make everything better.

Don't even get me started on his well-known song with Andy Samberg.

No joke, I parodied that in high school so special shoutout to The Lonely Island and JT for those formative moments.

Their history of rap series is borderline iconic. When you're the best part of two different NBC comedy shows as a guest star, you're doing something right.

Look... Michael Jackson has one of the best videos of all time. (In my opinion, the best ever). And like a dozen other incredible videos. But the point of this section is not to say Timberlake's are better, just that they're pretty damn good too.

Check out this crazy music video for Timberlake's Say Something.

It might not look like much on the surface, but they shot this music video in one take in multiple stories, with a dozen musicians and like 50 singers and it just blows my mind.

Or this music video where they turned the Hollywood Bowl into a super cool speakeasy.

This video, by the way, is directed by David Fincher and every frame is gorgeous. And if you're only familiar with David Fincher's film directing work (Fight Club, The Social Network, Gone Girl, House of Cards, etc), we'd also like to remind you that he's directed some absolute blockbuster music videos including Madona's Vogue, Aerosmith's Janie’s Got a Gun, and Nine Inch Nails' Only.

There's no doubt Jackson worked with some amazing artists in his time, but we'd argue that his solo work is really where the lions share of his good music is. We struggled to come up with a good list of Michael Jackson collabs that really knocked our socks off. Most of the songs lack his signature sound and end up as a bit of a mess. Feel free to correct me if I'm wrong!

Meanwhile, the list of artists Timberlake has worked with is staggering.

Starting with Michael Jackson, no less. He's also worked with Janet Jackson, Alecia Keys, Beyonce, Jay Z, The Black Eyed Peas, Rihanna, Chris Stapleton, Drake, Snoop Dogg, 50 Cent, Timbaland, and T.I. It seems like every time he puts out an album he collabs with one or two musicians at the absolute top of their game.

So we'll call this one a tie.

Who knows, Timberlake still has plenty of time to squeeze in a couple of collabs. We want to see a collab album of just Justin in Beyonce and watch the world explode.

There, I said it. And honestly, this might be the point on which I bring people back to my side. I don't even want to argue it.

Jackson 5 has like three good songs and a Christmas album.

And if you've listened to the Christmas album, you know how horrible it is. No offense of the rest of the Jacksons, but there's a reason Michael was the most successful.

N*SYNC, on the other hand, has 0 good songs and all of them are great at the same time.

How is that possible? I don't know, you'll have to listen to "Bye Bye Bye" and let me know.

Sorry to end on this low note, but it's important. And it's not even that Justin is a great person, he's just hasn't caused as much controversy as Michael Jackson.

We know Jackson was acquitted in 2005.

But R. Kelly was similarly acquitted for his alleged crimes, and a whole slew of new evidence just came out against him. Well unfortunately for Jackson fans, something similar just happened.

This new documentary paints Jackson in a very bad light.

In the doc, Leaving Neverland, director Dan Reed talks with two men who claim Jackson sexually abused them when they were 7 and 10, respectively. Whether or not these accusations are true, we can't deny that Jackson had several unhealthy or at least borderline uncomfortable relationships with young boys. And even if you are in the "respect the art, not the artist" camp, these accusations and the court case that was settled in 1994 surely taint Jackson's legacy. But as always, let us know what you think! We're certainly not perfect, and hey, maybe we were way off base with this one. Let us know!