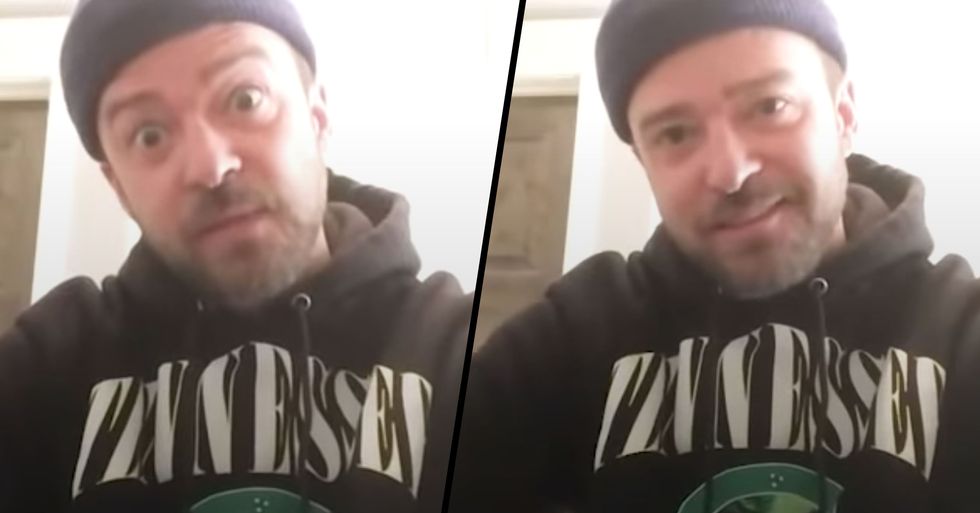 Ah, another day, another celebrity weighing in on the pandemic.

Like many of us in the world right now, Justin Timberlake is practicing social distancing. But, his latest comments about the matter have been causing a real stir online...

Justin Timberlake is one of many celebrities who have been slammed during this pandemic.

From grossly misjudged gestures to all-out ignorant comments - many A-listers have been digging themselves a huge hole during this uncertain time.

Take Gal Gadot and her rendition of John Lennon's "Imagine," for instance.

The 3-minute video, in which the star enlisted a whole slate of her A-lister pals, aimed to boost morale but had quite the opposite effect.

An influx of people slammed the video.

not rich ppl doing this instead of opening their purse like what are we gonna do with this awkward acapella 😭 https://t.co/mICxLbOWrR
— electra (@electra)1584584061.0

With many asking why she wasn't opening her wallet instead of singing a song.

During a video, the star compared her mansion to “being in jail."

Which, of course, didn't go down too well with fans...

People don’t want privilege and wealth pushed into their faces – especially when so many out there are living in poverty and cannot gain access to basic essentials such as food and toiletries.

I’d almost assume that Ellen’s stupid “everyone in jail is gay” joke would be nixed in a normal filming situation b… https://t.co/RuGCaJToxd
— marshy (@marshy)1586259810.0

Cracking the joke that everyone in jail is gay. This god-awful stereotype shouldn’t be encouraged by the rich and famous – especially not by an openly gay woman like Ellen.

Just last week, Kendall Jenner and Justin Bieber came under fire for their "tone-deaf" comments about the global pandemic.

Justin and his wife Hailey Baldwin joined Kendall for an Instagram live, where they chatted what they have been doing in self-isolation and how “blessed" they are.

“How blessed are we... a lot of people obviously in this time… have a crappy situation," Justin said, as Jenner chimed in: “I think about it all the time."

He went on to say that he and the 2 models “can’t feel bad" about their lifestyles because they “worked hard." “And, you know, they look at us, and obviously, we worked hard for where we’re at so it’s like we can’t feel bad for, you know, the things that we have, but I think just us taking that time to acknowledge that there are people who are struggling is important."

The Instagram live was screen-grabbed and viewed over 3 million times...

With many angry fans pointing out how clueless the trio's comments were.

Yep, not a great move.

But, it seems the latest celeb to be criticized is no other than Justin Timberlake.

And people were not in the mood to deal with his comments... Keep scrolling for the clip.

The star is currently self-isolating along with his wife, Jessica Biel, and their five-year-old son, Silas.

And they're doing it from the comfort of their ranch in Montana, which Justin has admitted that he is extremely blessed to have.

But that isn't the reason why he has landed himself in hot water...

Nope. He's actually got on the wrong side of parenting Twitter for comments he made during an interview.

Justin took part in a Zoom interview over the weekend with SiriusXM’s Hits 1 to promote the release of Trolls World Tour.

During the interview, he was asked if the quarantine had put any stress on his marriage - as it had done with others.

"We're doing good. We're mostly commiserating over the fact that we… just, 24-hour parenting is just not human."

This probably wasn't the smartest move...

And not an ounce of sympathy was in sight.

People are well and truly at the end of their tether.

And had no time for his comments.

Many shed light on the stark contrast to their own experiences.

Several parents highlighted the struggles they are going through right now.

Whether he was joking or is just ignorant, there's no doubt he'll think twice before weighing in on the pandemic again. There are, however, some celebs that have completely hit the mark when it comes to the pandemic - and one of those is Lady Gaga. Keep scrolling to find out why she is being showered with praise for her reaction to the outbreak...