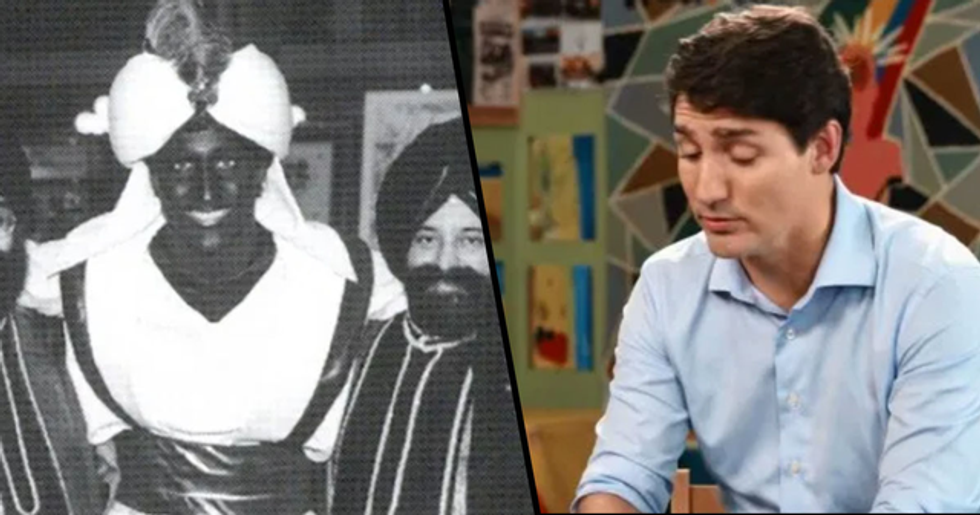 Justin Trudeau Asked By Children Why He Painted His Face Brown

It's sad to see that the leaders of such a progressive society have been involved in problematic cases such as the one I'm going to tell you about. Justin Trudeau has been known for his kindness, his compassion, and his overall generosity. That's what makes him such a loveable character.

However, this particular story could be an inch away from tainting his credibility forever. I'm disappointed to tell you that some very disturbing photographs and a video of the Canadian prime minister have emerged online. He is seen to be in "brownface" and "blackface" on more than just one occasion. In no way, shape, or form is blackface or brownface acceptable. And I'm going to tell you why.

Now Trudeau has been called out once more for his problematic past - by a rather unexpected interviewer.

Trudeau has been known for his inclusive policies.

But things have taken a turn for the worse.

With the Candian elections looming over the country, there is no room to **** things up now. But it seems as if, sometimes, it just takes a little digging and, from being on top of the world, you can be thrown down into the dumps.

And that's exactly what happened to Justin.

Time magazine recently got their hands on a bunch of old photos of Trudeau from when he used to teach in West Point Grey Academy, a private school in Vancouver.

Trudeau taught there for a couple of years when he was twenty-nine years old.

And, during his time there, there was an "Arabian Nights" themed party where everyone went dressed up in costumes which were typical of "Arab" culture.

However, Trudeau took his "costume" one step further.

Instead of just coming in a long white two-piece as everyone else did, Justin decided he was going to go all "Aladdin" on everyone, throwing on a white turban and painting his hands, neck, and face dark brown. A classic brownface case.

The picture shows him surrounded by a bunch of girls...

Who, very wisely, decided to just come sporting their natural skin colors but still in traditionally stereotypical Arab outfits. Understandable, because it was themed that way. However, what I can't seem to understand is why in the name of sweet baby Jesus, Trudeau decided it would be acceptable to smother himself in dark brown paint for the occasion.

It clearly wasn't a requirement, but he did it anyway.

And, sadly, this isn't even the first time a tasteless incident has occurred. In a similar manner to this one, Trudeau was seen in blackface while singing a Jamaican folk song for a school talent show.

We don't need any. He admitted it himself. But, just in case you don't believe me, or the man himself, Time Magazine got their hands on the second photo, too.

A third incident has blown the whole situation out of control.

A video of the Candian prime minister has taken hold of all the headlines. It shows him in blackface, yet again, with a wig on, raising his hands above his head. It appears as if he's yelling something but there is no sound. Keep scrolling for the shocking video at the end of this article. It is very disturbing, to say the least.

I was such a fan, but now, now I just don't know what to think. For a man that goes on and on about tolerance and diversity, he really has a nerve. How do you base your entire career on aspects of society that you've never really respected? Was it all fake for a bunch of votes? It really does damage his credibility.

What makes it worse is the fact that he's done so much good work as a leader.

However, that doesn't cancel anything. And those of you that want to defend him with the line: "But he was young..." or "It was in the past..." Do me a favor and leave. He was a twenty-nine-year-old man. A teacher. So don't come through telling me that he "didn't understand what he was doing."

So, why is blackface so problematic?

For those of you that still don't seem to understand why black/brown face is so offensive, firstly, sort yourselves out. Secondly, I've got the facts here for you.

This is going to be extremely harmful for Trudeau, especially right now.

In the wake of his re-election, this couldn't come at a worse time. But, to be honest, if this came out at any time during his entire reign as prime minister, things would be as awkward as they are now.

Thankfully, unlike other politicians, Trudeau took fully accountability for his actions.

This doesn't take away from his disgusting actions, but I'm glad one world leader has finally realized his faults and apologized for them. This is what he had to say: “I apologize profoundly. I regret it deeply. I’m deeply sorry I did that, I should have known better."

His opposition, Conservative leader, Andrew Scheer, quickly capitalized on the downfall, expressing this:

"I am extremely shocked and disappointed. It was racist in 2001, it’s racist now." But then again, he has been criticized for being homophobic and racist by his own party members... So he doesn't even deserve a second glance. Bye, Andrew.

Jagmeet Singh, the first colored New Democratic leader who also wears a turban, expressed his issues with this revelation.

Trudeau said that he already made calls to his colleagues, to apologize for his behavior.

"Obviously I regret that I did it," he said. "I’m pissed off at myself, obviously." I'm just glad he's taken full responsibility for his actions as opposed to blaming his friends, his peers or the environment he was in. We appreciate that. As for the election, I don't know which way this one's going to go, but these images have truly been a game-changer.

The heat still isn't off Trudeau.

Because he's still being questioned about his problematic past. But his latest interviewer may be the toughest yet.

This week, Trudeau appeared on "New Mom, Who Dis?"

The Facebook Watch show is hosted by new mom Jesse Cruickshank. And while on the show, he was faced with some surprisingly harsh critics.

via: New Mom Who Dis?

"Why did you paint your face brown?" they asked. Taken aback, Trudeau replied, "Ooh. It was something I shouldn’t have done because it hurt people."

"But did you paint your nose and your hands brown?"

via: New Mom Who Dis?

"Mmm-hmm. Yeah. And it was the wrong thing to do. It’s not something that you should do and that is something that I learned. I didn’t know it back then and I know it now, and I’m sorry that I hurt people."

Will this be the last we hear of these incidents?

We doubt it - but that's probably for the best. At the very least, perhaps these incidents can serve to educate people.