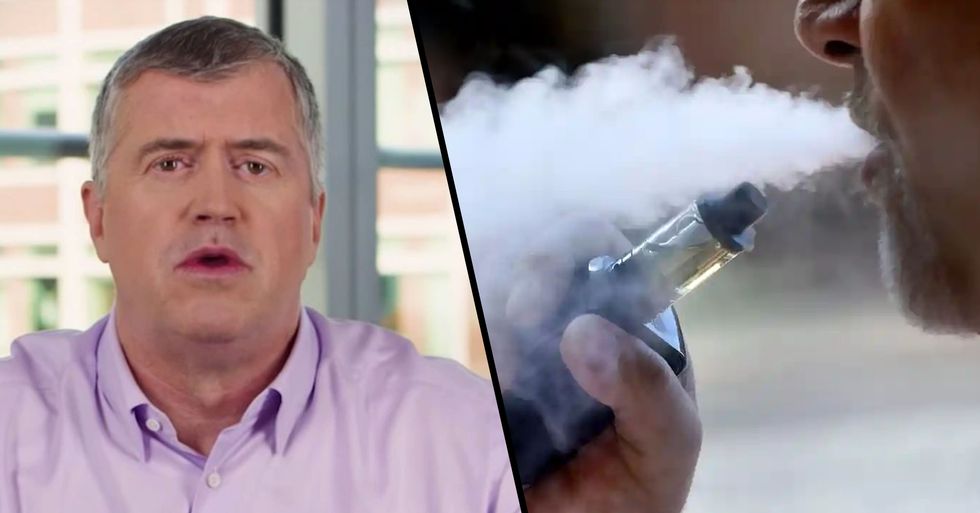 Juul's CEO Steps Down After He Warned People Not to Vape

Vaping seems to have descended into some kind of trend, fad, or even frenzy, in recent years. Available in an array of flavors that don't smell gross or leave both your breath and your hands with the stench of the cigarette, it can seem tempting.

And, as with most things that sound too good to be true, there's usually a downside.

There have been a number of cases in recent years wherein vapers have been hospitalized with nasty effects caused by using the devices. The increasing number of hospitalizations has prompted a national clampdown on the habit, with bans starting to be implemented across the country, and people waking up to the sinister side of the devices.

And today, the war on vaping seems to have gotten too much for Juul CEO, Kevin Burns, who has stepped down from the company. The company is one of the leading giants in the vaping industry, so this is a pretty big deal...

Keep scrolling to unravel the mess Juul has found itself in.

The use of e-cigarettes has been rising at the fastest-recorded rate of any other substance, so there's a hell of a lot of people that are doing it.

It was originally intended to help people kick their smoking habit.

Vaping came on the scene as an alternative method to quit smoking as users can choose how many milligrams of nicotine they want to smoke, though it should be noted that the devices have never officially been approved as a stop-smoking method.

Though it may have been intended for adults trying to quit smoking, there's now a staggering number of teens who've never smoked a cigarette in their lives, opting to vape on e-cigarette devices.

The popular vaping brand, Juul, takes up more than half of all e-cigarette retail market sales in the U.S. With its stylish design and small and discrete size, it's no wonder that teens are finding this brand in particular so appealing. The sleek devices could easily be mistaken for a USB stick, but the e-cigarette contains as much nicotine as 1 to 2 packs of cigarettes, which is alarmingly 3 times higher than the nicotine levels permitted in the European Union, meaning Juul can’t actually be sold in Europe.

The company is worth a whopping $38 billion.

With the vast array of flavors, vaping can be very tempting.

There's no less-than-pleasant odor as with ordinary cigarettes and with flavors ranging from cheesecake to passionfruit, the e-cigarette devices can seem irresistible to impressionable teens.

But it's not all sunshine and rainbows.

Vaping liquids still have the highly addictive drug, nicotine, in them. The substance is known to cause harmful side effects in young people's bodies and brains, with some evidence to say that nicotine exposure may make the developing brain become more sensitive to substance use disorders later in life.

Not to mention the fact that trying to quit nicotine is a whole other ball game.

Trying to quit the drug can lead to serious withdrawal symptoms, including nervousness, restlessness, anxiety, depression, and fatigue.

But, apart from nicotine, do we actually know what's in the vaping liquids that so many people smoke?

Experts have warned that vaping devices can be contaminated with harmful chemicals such as traces of endotoxin, a microbial agent that can be found on gram-negative bacteria or glucan, which is found in the cell walls of most fungi. Both of these toxins are known to cause asthma and decreased lung function.

There is clearly a much sinister side to the habit.

It has now been discovered that e-cigarettes are just as harmful as regular cigarettes, if not worse. And, in more recent news, they have been found to be fatal.

The teens had severe lung damage after inhaling the psychoactive compound - found in marijuana - via a vaping pen.

And the vape pens themselves have been known to have deadly consequences.

A seventeen-year-old was left with a shattered jaw and multiple missing teeth after his vape pen exploded in his mouth. But, even more scarily, at least 2 people have died as a result of e-cigarette explosions in recent years. Last year, a Florida man was killed after his vape pen blew up, sending pieces of the device into his head and starting a small fire in his home. Then, in February, a twenty-four-year-old man’s vape pen exploded and hit the carotid artery in his neck, causing a fatal stroke.

Another vaper recently has had a brush with death too.

A teenager from Florida has spoken out about the dangers of vaping after having his own terrifying health scare as a result of using an e-cigarette.

Chance Ammirata was a regular user of the popular Juul pods.

The eighteen-year-old student told the Daily Mail that he started vaping using the Juul e-cigarettes around eighteen months ago as he thought that they were a "safe" alternative for smoking normal cigarettes - vaping 1 pod every couple of days.

But, he needed emergency surgery because of them.

The teen said that he struggled to sleep because of pain on his left side, but put it down to muscle strain rather than presuming the worst. After waiting 5 hours to be seen in the hospital, he was surrounded by surgeons, who told him that his left lung had collapsed.

The eighteen-year-old was then rushed in for emergency surgery.

The surgeons had to insert a tube into his lung to keep it inflated (which he had to keep in for a week), and were luckily able to repair the hole in his lung. Chance was in shock by the life-threatening diagnosis as he hadn't suffered from any of the usual symptoms such as coughing or wheezing.

But there was more bad news for the teen...

The surgeons told him that whatever he had been smoking had left black dots on his lungs that would likely take years to heal, although they may never heal at all. To top it off, Chance was also told that he won't ever be able to do cross-country running or scuba dive, and it'll be a long while before he can fly again.

The teen has never smoked normal cigarettes and says that it was the Juul vaping pods that caused the damage.

The teen took to social media to share the horrifying image of his lungs, writing: "You thought Juuls were safe. So did I." "The black dots on my lungs are reminiscence of juuling."

He warned fellow vapers about the dangers.

"I've been doing it for a year and a half and can never do it again - you really shouldn't either. I know how hard it is to change anyone's mind who's addicted because I was too. And I don't think anyone could have said anything to make me stop," he wrote. "But your lungs most likely look like this too if you've been smoking. "Don't let it get worse - please stop - like really, please. It's so f*****g scary."

The CDC held a briefing on the rise of severe lung illnesses connected to e-cigarette use and said that the number of reported cases had more than doubled in the last week to 450, from just over 200. The respiratory problems have now impacted residents in thirty-three states and 1 jurisdiction.

The number of deaths linked to vaping is now up to 5 as the CDC investigates the 450 cases of severe lung illness reported nationwide.

Action is starting to be taken, however.

New York, for example, has now officially banned the sale of flavored electronic cigarettes and vaping items. However, menthol and tobacco flavors are still available to purchase. New York Governor, Andrew Cuomo, stated: "Flavored products are highly attractive to young people. They are obviously targeted at young people, and they are highly effective at targeting young people."

And it led to a shocking statement from Juul's CEO...

“Don’t vape. Don’t use Juul," Burns told Tony Dokoupil in an interview on CBS This Morning.

“Don’t start using nicotine if you don’t have a preexisting relationship with nicotine," he said. “Don’t use the product. You’re not our target consumer."

He literally urged people not to use his products...

In an effort to curb sales of its products to minors, Juul also said it planned to offer incentives to retailers to install a new electronic age-verification system at the point of sale, The Wall Street Journal reported.

And Burns announced that Juul will stop selling to any retailer that hasn’t adopted the system by May 2021.

But it looks like Juul's CEO has completely buckled under the pressure.

The war on vaping seems to have gotten too much for Kevin Burns, as today it was announced he'd stepped down from the company.

The decision is effective immediately.

And Altria executive KC Crosthwaite will take over the role.

The news comes days after it was announced the company was under criminal investigation.

According to Insider, Juul is also under investigation by the Federal Trade Commission, the Food and Drug Administration, and several state attorneys general into whether the vaping giant used specific strategies to market to minors.

Specifically, its use of social media influencers.

The FDA is also considering several issues including the high nicotine content of Juul's refill pods.

And so the war on vaping continues...

And as for Juul, the future isn't looking too bright.