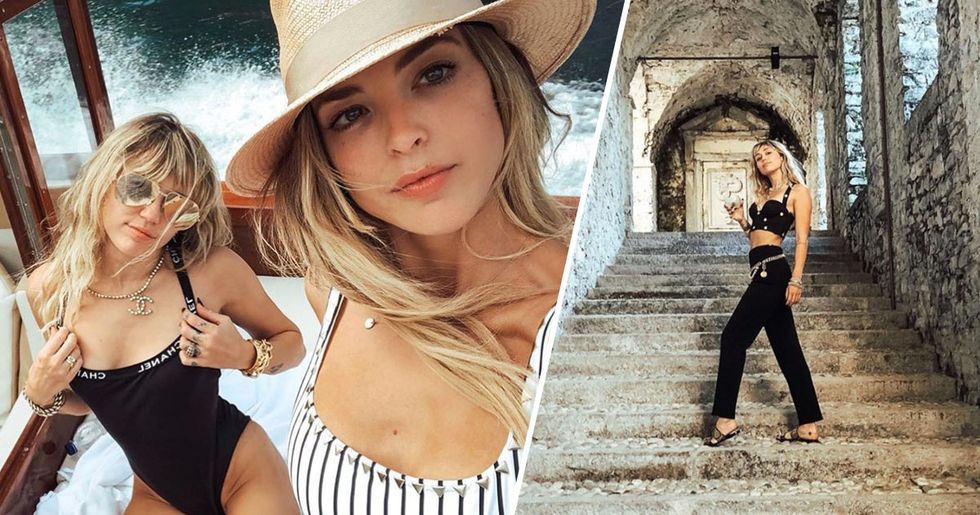 Kaitlynn Carter Admits She Was 'Mortified' Over Fling With Miley Cyrus

Miley Cyrus was rather reflective following her break-up with hubby Liam Hemsworth, sharing sage words with her fans. She was also seen getting, ahem... close and cozy with reality TV star, Kaitlynn Carter while on vacation together.

The short-lived fling was drama-filled - but now Katilynn Carter is looking back - and not so fondly, either.

She was Hannah Montana.

Things were tense at the last public appearance.

Seen together for the last time at the Saint Laurent Men's Spring-Summer 2020 runway show in Malibu. Miley and Liam both appeared a bit tense, perhaps everything had already started to fall apart.

Apparently, friends of the couple were not surprised.

A source that spoke to People said that friends of the couple were not surprised that the couple called it quits. according to the source: "They’re not on the same page when it comes to a lot of fundamental things that make a relationship work."

Did Liam want to start a family?

These "fundamental differences" that the source claimed caused the split between Miley and Liam could have been starting a family? Of course, this is just speculation but sometimes loving someone isn't enough when you're at different places in your life. Liam is 29 now and could well be getting broody for his own brood. Chris and his wife Elsa have three children now, it would make sense if Liam wanted that for himself.

And as for Miley?

She was taking time to reflect. Sharing with her Instagram followers, Cyrus appeared to be taking a very pragmatic approach to the break-up. "Change is inevitable."

Though there are other things that the pop star seems to be reflecting on...

Her sexual awakening, being one. The singer has always been open about her fluid sexuality, telling Paper Magazine, "I am literally open to every single thing that is consenting and doesn’t involve an animal and everyone is of age. Everything that’s legal, I’m down with. Yo, I’m down with any adult — anyone over the age of 18 who is down to love me."

She then took a vacation with The Hills star, Kaitlynn Carter.

And the pair were seen kissing and cuddling whilst sunbathing in Lake Komo. Both Miley and Kaitlynn had only recently separated from their respective husbands, so I guess that's something to bond over, right?

Some suspected that Miley and Kaitlynn were more than just a fling...

TMZ has reported that Miley, her mom, Tish, and Kaitlynn were spotted hanging out together in West Hollywood.

People suspected the pair were moving on quickly.

And it was quickly proven that the exes are more than aware of this budding relationship.

It didn't take long for the exes to get involved...

It never does, does it? Brody Jenner was married to Kaitlynn, but the couple called it quits after just 1 year. And it didn't take him long to take to social media to voice his opinions on the raunchy pictures. He posted an inspirational shot of him stood alone along the edge of a cliff, captioning his post with, "Don't let yesterday take up too much of today." Seemingly innocent so far, right?

The comments beg to differ.

Jenner's The Hills co-star, Brandon Lee weighed in on Instagram calling the Miley and Kaitlynn pics a "scandal," with Jenner replying that he would get pics of himself and Liam holding hands... An obvious dig at the girls' adventure in Lake Komo, don't you think?

And Miley wasn't having any of it.

Most people should know this by now... do not mess with Miley. The pop star was quick to respond to their Twitter digs, and she didn't hold anything back.

Not the type of girl to hold her tongue, Miley chimed in and told Jenner to take a nap and "cool off."

Some argue that Brody was simply making light of the situation...

As what actually went down between Kaitlynn and Miley still remains something of a mystery.

The pair eventually offered some resolution.

According to sources, the pair viewed their well-publicized kiss as just good fun, and neither is looking to get back into a serious relationship so soon after their respective marriage breakdowns.

But months on, Kaitlynn has finally broken her silence on the relationship.

Speaking to Whitney Port on Instagram Live, she spilled the tea on what went down.

And let's just say she didn't have fond memories.

"What happened to me, like, basically just after Miley and I went our separate ways, I thought, ‘OK, like, my life’s just kinda going back to the way it normally was for me when I’m on my own."

"I had no expectations that anyone would give a s**t about me by myself."

"I had no plan in place. I didn’t think about anything."

"For example, I was dealing with a lot emotionally at that time, obviously, and I really wasn’t going out anywhere."

"I was just staying home."

"I’m used to it when I’m, like, with Brody or when I was with her, but never when I’m on my own. My mind is just swirling."

"I was just so mortified."

"The narrative was so not what the actual situation was and that was such a wake-up call for me."

"I had never thought about what my narrative even was or what it was going to be."

"I had always gone with the flow or whatever people say they say, I don’t care."

"In relationships especially, I have always taken a back seat a little bit and sort of trusted the person I’m with to run the show, especially publicly because it’s never really been something that I wanted."

"I never really wanted to put myself out there that way."

"But the bigger picture, the rest of the world, where you don’t know everyone, that’s like a whole other level."

"I was naive. You don’t get to be so nonchalant about it."

Well, there you have it!

And as for Miley? Scroll on for the do-gooding she's been partaking in recently ...