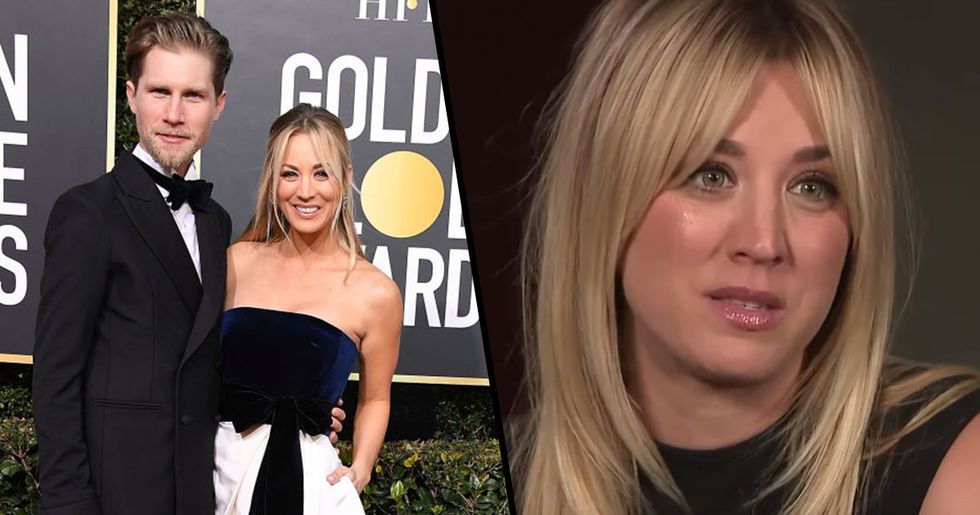 The Big Bang Theory star, Kaley Cuoco, recently revealed that she doesn't live with her spouse and people are completely baffled.

But now, she has opened up behind her unconventional set-up and has revealed why they don't live under the same roof... And it actually makes sense.

For most married couples, living together is a must.

Sharing your heart with someone must surely mean sharing your home too? Well, not to all couples - And celebrity couples, in particular. Keep reading to see some surprising celebrities who don't actually live with their spouses...

Paltrow married the Glee writer and producer last year. The couple first met when filming the popular highschool show choir TV show in 2010, but only went public with their relationship in April 2015. After getting engaged in 2018, they finally tied the knot in a small ceremony in September of that year.

In her second marriage, the decision to not live together was also a conscious one. Paltrow explained the logistics, which split the 7 day week into 4 days living together and 3 days apart, allowing them both some alone time in their separate houses.

It can be easy to rush into things...

I mean, for some people, that can work out fine, it can be great even! You've known each other for two minutes and you're already in IKEA hunting for that perfect dining room set... it's exciting and you are just so in love. Sadly, more often than not, this can lead to arguing over the same dining set 6 months down the line when you decide to consciously uncouple.

Now, I know they ended up divorced, but this duo did have a successful thirteen-year love affair. Aside from Tim's snoring, Helena explained to the Radio Times in 2010 that, "we see as much of each other as any couple, but our relationship is enhanced by knowing we have our personal space to retreat to."

The couple famously had separate apartments in a conjoining art deco block.

This kind of luxury is certainly a step up from having separate bathrooms. This was not something that Helena dismissed and she acknowledged their privilege saying: "It’s not enforced intimacy. It’s chosen, which is quite flattering – if you can afford it."

Tilda Swinton had a pretty bizarre living situation for a while...

The Chronicles of Narnia's White Witch, Tilda Swinton, did not live with her long-term beau, Sandro Kopp, for a long time. Twenty-years her junior, Kopp was apparently perfectly fine with the unusual arrangement. That being said, for years, Swinton remained living with her ex.

According to Swinton, the cohabiting worked out just fine. Kopp would stay at the family home regularly and her ex-partner, Scottish playwright and painter, John Byrne, had his own relationship with somebody else. The couple remained in the same home for the sake of their three children, who they wanted to raise as a family.

Kaley's living situation shouldn't come as too much of a shock.

But hey, each to their own, right? Plus, they've had a pretty normal relationship so far...

Kaley first met her husband, Karl Cook through their mutual love for horses...

Speaking to The Talk shortly after they met, Kaley gushed: "I finally found my horse guy. It was very meant to be. He's an amazing rider, amazing equestrian, and a great human. We shared a passion for horses and dogs… It's been lovely."

Kaley and Karl got together because of their shared love of animals.

So you'd think that they might want to one day share their animals together in a living situation...

But the pair are clearly in love.

They tied the knot 2 years after meeting, and they couldn't be happier.

The couple did plan on moving in together at some point...

According to Metro, Kaley explained to E! News that: "We’re eventually going to be under the same roof forever. We have a very unconventional marriage, you know. We have different locations that we’re at a lot." I guess hectic schedules are a fair enough reason to be apart, but it's actually a "dream house" that the couple are supposedly building that has kept them apart for so long.

Not that they haven't been enjoying the space.

Discussing why the pair are not in any rush to get their dream house finished, Cuoco said: "As of now, it’s worked out fine for us. I have no problem with it."

Sure, cohabiting can be fun...

For about 5 minutes. But then it's all, "Why do you never wash the towels?," "Can't I have five minutes to myself?," and "You've used all the shampoo." When you're a guest at someone's house, it's way better.

Sometimes, the things that go on in private should stay private. Maybe Kaley likes the fact that she doesn't have to walk in on her husband taking a dump every morning...

Karl and Kaley are serious about their careers.

As a professional equestrian, Karl must have to focus a lot on his horse riding. Perhaps not having his wife around means that he can maintain his focus. Similarly, learning lines and securing deals in her roles as an executive producer is surely easier for Kaley without her hubby lounging around on the couch.

It's clear that this married couple still make time for sleepovers...

Even time apart can't help you from falling asleep...

In a sweet Instagram post, Karl wrote: "The key to the strength of [Kaley] and my relationship is we always are equally excited to be back together after a week apart. I know it's hard to tell but [Kaley] couldn't be more excited."

The dream house has taken a while to build...

But now, it seems that it has finally been completed.

The house is ready!

But the couple are yet to move in.

Despite the house being up and ready to go, Kaley and her other half are yet to officially move in together...

Still. After 2 years of marriage. Speaking to Extra, she explained, "We are built, we are so excited. But we have not spent an evening in it yet."

But Kaley is yet to join him. "Actually Karl has been at home and I said 'Why don't you go and stay at the house?' but he's waiting for me to get there and have all the animals there."

And she doesn't understand people's confusion over her decision. "We're going steady; he gave me his letterman jacket, we're moving in together. I know. Everyone was, like, so crazed that we didn't live together, they couldn't believe. I was like, 'I don't know', didn't understand it. Everyone has an opinion."

But she has settled on April as her official move-in month...

When she finishes filming for the new HBO series, The Flight Attendant. "When I wrap in April, that will be our first time in our new house."

Though I wouldn't hold your breath...

Maybe this couple will just live apart forever? But hey, whatever makes them happy! We wish them all the best in the future.