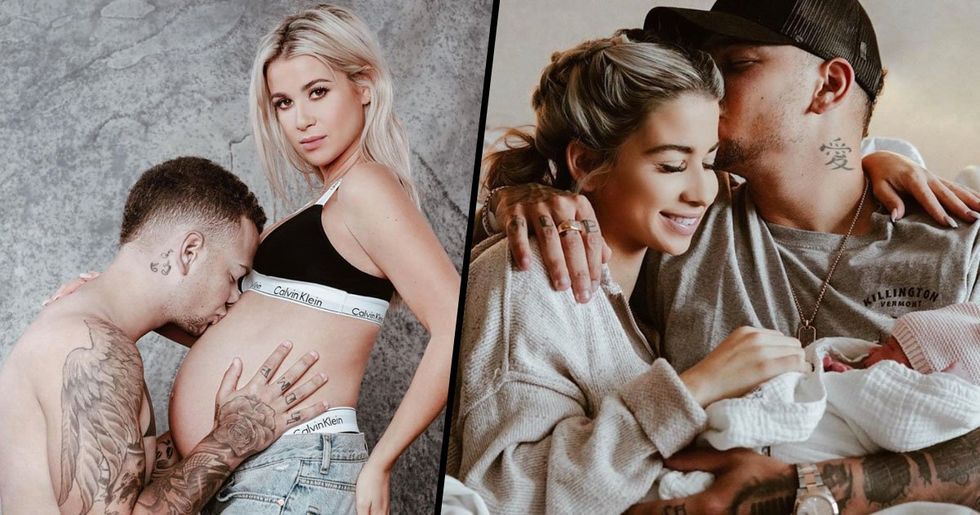 Kane Brown and his sweetheart/wife Katelyn have welcomed their first child into the world.

Brown, who is known for his career as a country singer, has been married to Katelyn Jae for a year now, after years of dating and keeping a low-profile.

The happily married couple announced their pregnancy in April of this year, and the happy day finally came yesterday when Katelyn gave birth to their baby girl.

Keep scrolling to learn more about this beautiful couple and their newly budding family...

Kane Brown and his wife, Katelyn, are couple goals.

The country singer met his wife a few years ago and their relationship has truly blossomed since.

But how did this couple cross paths?

Brown, who is twenty-six-years-old, is known for his self-made career as a country singer, despite having an active interest in R&B music.

Brown made himself known through social media...

He released his first EP, Closer, in 2015, which followed with the single "Used To Love You Sober."

He signed with RCA Nashville in 2016.

This was when he released his first full-length album, which was self-titled Kane Brown, and he truly began making a name for himself in the music industry.

It was at one of Brown's concerts where he met his future wife.

Katelyn Jae, who is from Philadelphia, Pennsylvania, is also a singer and she spent the majority of her childhood singing at school and in competitions.

Katelyn is a very talented woman...

When she was sixteen, she emerged among the top 5 singers at the International Model & Talent Association Conference, which is quite an achievement for someone of that age.

She met Brown at one of his Florida concerts...

According to reports, the pair didn't actually talk at the concert but Brown contacted her via Instagram afterward when he returned home to Nashville.

He organized to have Katelyn fly out to Nashville for their first date...

At an interview, Brown is quoted to have said: “She came to one of my shows, and the first time I saw her, it was the shy giddiness." "I didn’t know what was going to happen…I messaged her on Instagram and said: “Hey, when are we going to hang out?" And I flew her down and she hasn’t left since."

Who said that romance was dead?

It is also reported that the couple went to Top Golf for their first date, which is the cutest thing ever.

The couple went public in January of 2017.

They had been dating for a while at this point, but they had decided to keep their relationship low-key and extremely private.

A few months later, the pair announced their engagement ...

When it came down to popping the big question, Kane didn’t go the "normal" route and proposed while the pair were watching The Amityville Horror movie.

Brown admitted to it being a weird way to propose...

But he "simply couldn't wait."

And the wedding that took place at Mint Springs in Franklin, Tennessee, looked truly stunning.

The romance didn't end there...

Brown even unveiled at the wedding a tattoo of his new wife's name on his right hand.

The married couple attended the 2019 Music Billboard Awards together...

And this is when Brown announced that they were expecting their first child together.

Brown gushed over his and his wife's excitement over becoming parents...

"It's been so hard keeping this a secret," he wrote on his Instagram, "but the KBs are gonna be parents!!! I'm gonna be a daddy!!"

The couple went on to document Katelyn's growing bump...

It was clear how excited they both were!

The pair announced they were expecting a baby girl...

And they had even already decided on the name... Kingsley.

Kingsley Rose Brown was born on the 29th of October 2019.

And it's safe to say the couple are head over heels in love with their daughter.

Brown is over the moon to finally be a dad...

Congratulations to the happy couple on their beautiful little family!