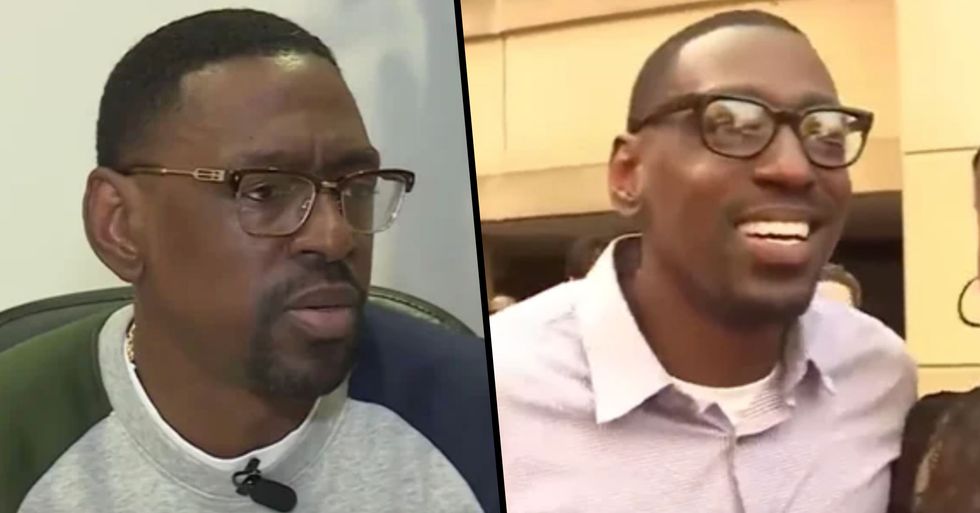 The news has just broken that a Kansas man who served twenty-three years behind bars for a wrongful conviction has not only been released, but he has also been awarded $1.5 million.

But despite this famous phrase, things don't always work out properly in the eyes of the law.

If the jury believes that a person is guilty...

That person will be sentenced and they will serve time behind bars.

But what about if this person is actually innocent of the crime?

Tragically, people have actually served real prison sentences in the past after being wrongfully convicted of the wrong crime.

One of these people is Lamonte McIntyre...

McIntyre was just seventeen-years-old when he was convicted of the murders of Donald Ewing and Doniel Quinn in 1994.

The 2 men were fatally shot...

Doniel Quinn, who was twenty-one, was pronounced dead at the scene and Donald Ewing, who was thirty-four, was rushed to the hospital where he later died.

He was sentenced to serve 2 consecutive life terms in prison...

And this was all from eye-witness accounts rather than physical evidence.

It is appalling that McIntyre was convicted on the basis of eye-witnesses alone...

And there wasn't any hard evidence to suggest that the teenager had committed the crimes.

This turned out to be a wrongful conviction...

He was freed in 2017 after a local prosecutor asked the court to vacate his convictions and to drop all charges, calling his case an example of "manifest injustice."

"Today, Lamonte McIntyre has been declared, finally and conclusively, a completely innocent man," his attorney, Cheryl Pilate said in an emailed statement as reported by Fox News. "That long-overdue recognition, along with the statutory payment and other benefits, will help lighten a bit the heavy load he has carried. Lamonte is grateful for the benefits of the compensation statute, but he knows his fight for justice is far from over."

He was forty-one on the day of his release...

And he had well and truly missed out on twenty-three years of his adult life.

And in 2019, McIntyre decided to file a lawsuit against the state of Kansas under the mistaken-conviction statute, a law which had been passed the year before.

This statute permits those who have been wrongfully convicted and imprisoned to seek monetary damages from the state, and McIntyre gave testimony in support of this measure before a state Senate committee in 2018.

On February 24th of this year, the lawsuit was finally resolved...

And an agreed resolution of a mistaken-conviction lawsuit was reached.

"We are committed to faithfully administering the state’s mistaken-conviction law as the legislature wrote it," he said. "In this case, our office worked diligently to obtain and review all available evidence, including evidence identified but not provided in the earlier judicial proceedings."

The lawsuit will make sure McIntyre will receive the appropriate benefits...

"We were ultimately able to resolve all issues, satisfy all of the statute’s requirements, and agree to this outcome so Mr. McIntyre can receive the benefits to which he is entitled by law because of his mistaken conviction," he went on to say.

His compensation has totaled to $1.5 million.

McIntyre was also granted counseling, a Certificate of Innocence, and permission to participate in a state health care benefits program for the years 2020 and 2021.

Records of Lamonte’s conviction, arrest, and any DNA profile record information will now be expunged, allowing him to move forward with his life... which is the least that the state can do for this poor man.

McIntyre spoke to KMBC 9 about the devastating effects the wrongful conviction had on his life...

"The state of Kansas took away 23 years of my life and has given me nothing to rebuild. The state took away my youth. It took away every birthday and Christmas with my family, and every hard time when they needed me and I couldn’t be there," he explained.

Because of his wrongful conviction, McIntyre missed out on major family events...

"I missed joyful occasions and I missed sad ones too. I had nieces and nephews born while I was in custody who are young men and women now. I missed their entire childhoods. I was not able to comfort my mother when she buried her father, my beloved grandfather," he said.

We wish Lamonte the best of luck for his future, and we hope he can start to rebuild his life surrounded by the people he loves. Keep scrolling to learn about the injustice of a homeless woman who received a 5-year prison sentence for enrolling her son in school...