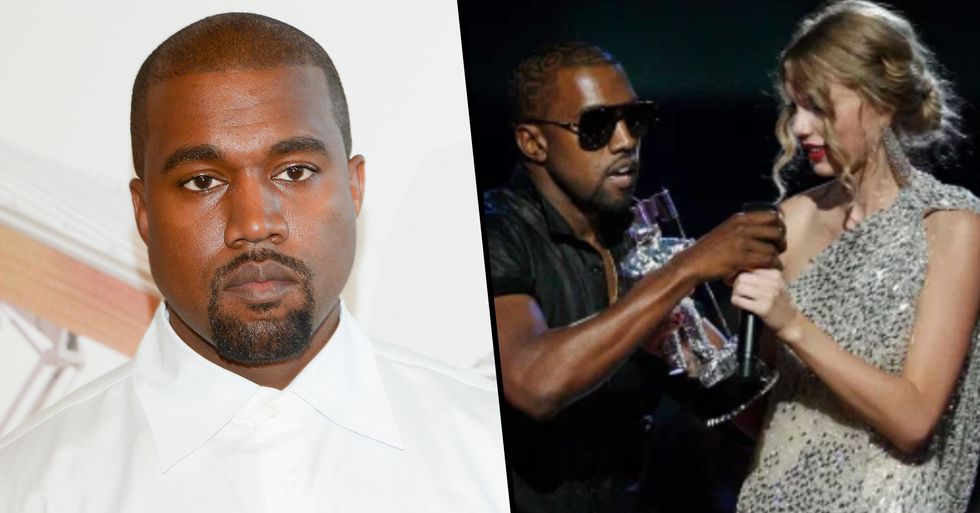 Chloe Rowland
Kanye West has spoken out about when he infamously interrupted Taylor Swift at the 2009 VMAs, and he had a lot to say...

It's impossible to forget the whole Kanye West and Taylor Swift feud.

But what about the moment that sparked it all?

Kanye infamously interrupted Swift's win on stage, but now the rapper has once again spoken out about the controversial moment.

And he had some rather big revelations about his actions.

In a tell-all interview, he revealed exactly what was going on in his mind to prompt him to walk on stage.

Kanye has become one of the biggest names in the music industry.

But in July, he stirred up controversy once again.

But, he took things to the next level.

So it's safe to say that even in recent months, Kanye has been at the center of scandal after scandal.

But, if you cast your mind back to 2009, you may remember one of his most problematic moves to date.

In what turned into one of the most memorable moments of pop culture, Kanye decided to storm the stage after Taylor Swift - who was only nineteen at the time - won the award for “Best Female Music Video" at the VMAs.

He snatched the microphone out of her hand and proceeded to tell the entire audience that “Beyonce had one of the best videos of all time," insinuating that she deserved the award over Swift.

And the entire time, Swift was stood there silently.

After Kanye reportedly apologized for the incident, in 2013, he decided to take the words back in a New York Times interview, saying “I don’t have one regret," and that his jumping and interrupting her on the stage “only led [me] to awesome truth and awesomeness."

In this turbulent year, he released the song “Famous", which featured the line “I feel like me and Taylor might still have sex…"

And the video even went as far as featuring a naked wax figure of Swift. How is that even acceptable?

And even though Swift denied these claims, West’s wife, Kim Kardashian, decided she was secretly going to record the phone call between the 2 artists and release it to the public.

That’s right, Kim Kardashian, the queen of editing her photos, decided to edit the video to favor her husband before she posted it for the whole world to see but she got exposed for it.

So, it's safe to say that Swift eventually came out on top.

But now, Kanye has claimed that it was a higher power urging him to interrupt Swift on stage all those years ago.

He revealed more during an interview this week.

"Right now, God is giving me the information … If God ain't want me to run on stage and say Beyoncé had the best video, he wouldn't have sat me in the front row. I would've been sitting in the back," he said.

"It wouldn't have made it so ridiculous of an idea because I had never heard of this person before, and Single Ladies is, like, one of the greatest videos of all time. And I was only drinking Hennessy because I didn't want to go to the awards show because it was a set-up."

Despite all this, Kanye goes on to admit that he didn't start reading the Bible until after his hospitalization in 2016.

"God brought me to my knees multiple times. The first time that I was put into the hospital in 2016, I actually started reading the bible. That was part of what God hit me with. You know, God has a calling on all of us and he uses us in different ways."

So, there you have it.

For more on Kanye, scroll on to read how he was mocked for his Yeezy line...