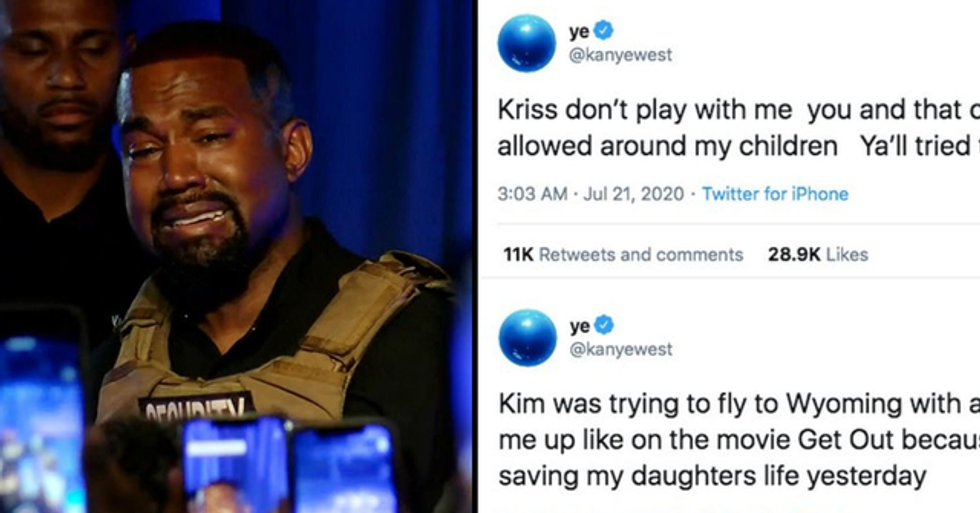 Following on from his public break down yesterday, Kanye West went on a furious Twitter rant and made some alarming claims about his wife, Kim Kardashian...

Since announcing his run for presidency on July 4th, people have been incredibly worried about the rapper... But yesterday, these concerns reached a whole new level.

And his behavior during and after the rally left a lot of people feeling alarmed, to say the least.

And despite initially Tweeting his support, even Elon Musk voiced his doubts.

Speaking valiantly to the crowd - without a microphone - Kanye said on the anti-slavery figure: "Harriet Tubman never actually freed the slaves, she just had them work for other white people."

But this is when things took a turn for the worst...

Then, his emotions reached a boiling point.

The man was clearly in a lot of pain which, in itself, arose a lot concern about him running for president.

You can watch a snippet from his unscripted speech above.

People were, quite understandably, alarmed by the footage...

Kim and the rest of her elite family have remained very quiet ever since Kanye's breakdown...

Though there have been rumors that the Kardashians are all "shocked" and "upset" by his actions.

But yesterday evening, Kanye went on a huge Twitter rant...

And, in doing so, he made some incredibly detrimental claims about his wife's response to the rally.

He began his rant by directing a tweet at momager, Kris Jenner, writing:

"Kriss don’t play with me you and that calmye are not allowed around my children Ya’ll tried to lock me up."

But then, he turned his attentions to Kim.

The rapper claimed, in a now-deleted Tweet, that his wife had tried to "lock him up."

"Kim was flying to Wyoming with a doctor to lock me up like on the movie Get Out because I cried about saving my daughter's life yesterday."

The Jordan Peele movie, Get Out, tells the tale of a black man trapped by white people attempting to use his body as a host for the brains of their deceased relatives... So, yeah, he's making some pretty wild hints with this one.

The Kardashians are yet to respond to the incident.

But, for now, we can only hope that Kanye gets the help he so desperately needs.