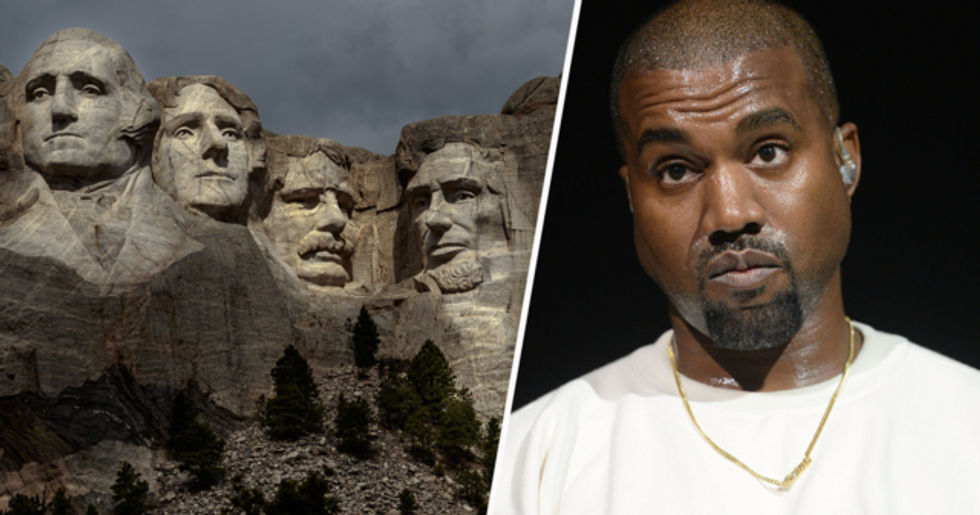 Kanye West Slammed for His 'Disgraceful' Picture of Mount Rushmore

It's no secret that Kanye West can be somewhat of a hellraiser online but, this week, people have been left outraged and disgusted by his "disgraceful" picture of Mount Rushmore...

When is Kanye West not stirring up controversy?

When he isn't insulting fellow musicians or boasting about his wife's wealth, he's running for president. You can't make this stuff up, can you?

But this week, he has taken things one step further.

Now, when he isn't causing viral outroars, Kanye is usually known for his impressive music career.

The rapper has released numerous albums in his time...

He has also dabbled in the world of fashion.

Kanye has been working on fashion lines since 2006, and his Yeezy collections are sold-out worldwide – despite waves of criticisms (and trolling) surrounding them.

But Kanye's music and Yeezy line isn't the only reason he's so famous...

The rapper met Kim Kardashian back in 2003, but they didn’t rekindle until October of 2011 – a mere few weeks after Kim divorced Kris Humphries after a seventy-two-day marriage.

Their wedding ceremony was as over-the-top as you'd expect, lasting an entire weekend with stops in European hot-spot destinations, Paris and Florence.

And they wasted no time in starting a family.

In December 2012, just months after announcing that they were a couple, Kim revealed that she was pregnant with first baby, North.

And, since then, their family has quickly grown.

But, putting his seemingly idyllic family life to one side...

It's no secret that his behavior has raised some eyebrows over the years. Kanye isn’t afraid of letting his opinion be known and he enjoys going to extreme lengths to do so.

Remember when he completely ruined Taylor Swift's acceptance of an MTV Video Music Award in 2009?

Instead of allowing Swift to happily accept her award – that she won – he interrupted her on stage saying that Beyonce deserved to win more than she did.

He has even made claims in the past that he is, in fact, a God, which didn’t go down well with Christian communities around the world.

Not to mention his strange history with politics.

While wearing a red “Make America Great Again" hat, the musician sat down with Donald Trump in the Oval Office in 2018, where he proclaimed his support for the polarizing president and declared Trump a “hero" in a rambling televised monologue that spawned myriad parodies.

So, it's safe to say that his behavior is often in the spotlight...

And this week is no exception to that.

You will all be aware by now that Kanye is attempting to run for president this year.

On July 4th, he made his shock announcement with the Tweet: "We must now realize the promise of America by trusting God, unifying our vision, and building our future. I am running for president of the United States! #2020VISION"

Ever since the shock announcement, his behavior has been slightly odd...

Inbetween unconfirmed rumors of him dropping out of the race, Kanye has been on a Twitter spree, tweeting frequently about his 2020 vision... And his love for metallic chairs.

But his latest Tweet has really whipped up the controversy...

And people are seriously divided, if not a little concerned.

Captioning his post with "2020", Kanye shared a photoshopped version of the monument with his face edited in alongside the other presidents. Did you ever see something so tasteless and disrespectful in your life?

Mount Rushmore was built upon sacred Native lands that had been stolen from the white government. The monument is now seen as a reminder of our country's brutal colonialism past, so for Kanye to edit his face into the rock has been deemed as highly problematic.

Kanye, when will you learn?

For more on the rapper's strange behavior, keep scrolling to see the time he spray-painted his entire body silver...