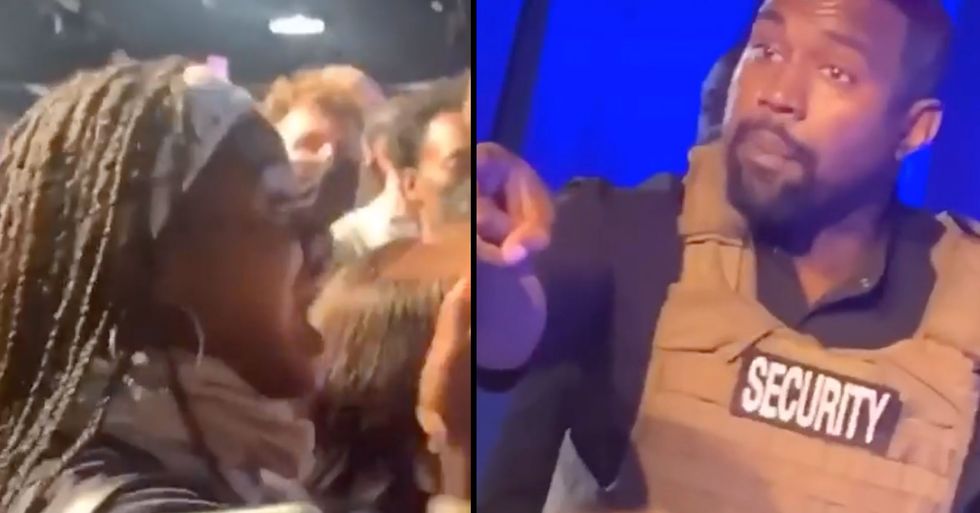 Footage of Kanye West has emerged of him yelling at a young girl who corrected his erratic rant at a campaign rally and it really goes to show the rapper's true colors...

In the most recent and bizarre turn of events for Kanye West...

Footage has emerged of him yelling at a young girl who corrected him during his erratic presidential campaign rally that has been making headlines in the last couple of days.

More and more footage has been surfacing from the controversial rally...

And a video has emerged of Kanye losing his cool with a young girl in the crowd.

The young woman has been named as Iesha...

And she was seen wearing a face-covering in the crowd. Kanye was going off on yet another rant and he suddenly targeted her for no apparent reason.

The young woman was doing nothing wrong...

"Do you want to be that same person? So your face is covered and we don’t even know who you are," he yelled at Iesha as the crowd gasped in surprise.

Iesha is seen to then pull down her mask and sarcastically point at her face...

And as the crowd cheer, Kanye storms off the stage... in typical Kanye fashion, of course!

The young woman explained that she had asked Kanye a question about gun reform but he didn’t answer. Instead, she said he spewed out random facts about himself followed by a rant with inaccurate facts.

We aren't at all surprised...

She then explained that she started shouting out corrections to his statements, but he then attacked her. This is when he yelled at her for interrupting him. Iesha said she was kicked off the stage and he called her a "sister soldier." He told her she wanted "Wakanda" and not "America."

She ended her video by begging the people of America to not vote for Kanye and to not give him the time of day.

And unbelievably, people began responding to her with their own stories of how Kanye has targeted them at his rallies.

This man isn't fit to be our president...

And Iesha went on to list several points as to why Kanye shouldn't be running this country.

The rapper is delusional...

And it is seriously scary to think that some people will be voting for him.

Here is the original video of Kanye freaking out at Iesha...

Let's hope that many of Kanye's supporters will learn from this eye-opening footage. Read on to see the comparisons between the treatment of Kanye and Britney when they both had their public nervous breakdowns...