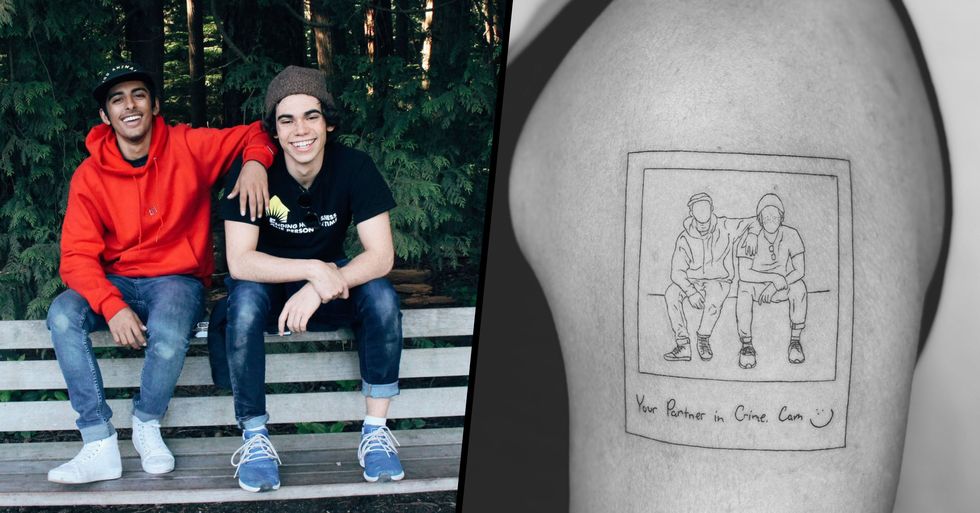 Karan Brar Got a Beautiful Tattoo in Honor of Cameron Boyce

Earlier this year, we received the heartbreaking news that Disney star, Cameron Boyce, had sadly, and unexpectedly, passed away.

Cameron, who was only twenty-years-old when he died suddenly, made a huge impact on both his fans and those who personally knew and loved him. Cameron was known to be battling an unknown illness throughout his life, and a coroner confirmed his death was as a result of his ongoing battle with epilepsy.

Tributes flooded in for the Disney star, from both celebrities and family members. And some of Boyce's friends and co-stars have even honored him with an inking.

Speaking to Haute Living, Cameron discussed his pride concerning his grandmother’s story: "Her story doesn't just inspire me ... It hits home with everyone who stops to listen to it." "She and the other eleven students set the stage for our generation to come together. We have to ensure - especially with some of the controversy plaguing us now - that we continue to push towards dreams that have yet to be realized. Equality in its truest sense."

Cameron was a vocal advocate for The Thirst Project, a charity dedicated to providing clean and drinkable water to disadvantaged communities. His humanitarian work raised $30,000 to build 2 wells for clean drinking water in Swaziland, and he also used his platform to raise awareness about the Global Water Crisis.

And news of his untimely death has hit the world hard. The actor passed away on July 6th, after suffering a seizure in his sleep - but people were initially unsure what the cause of that seizure actually was.

Only months previously, he shared a video onto his Instagram of him surprising his mom on Mother’s Day, and her reaction was nothing short of overjoyed.

Though, considering Cameron only passed away earlier this year, the family will most certainly be going through an unimaginable period of grief and pain, and will understandably not be thinking of social media right away.

But one tribute to Boyce was particularly beautiful.

It comes courtesy of his friend and co-star, actress Dove Cameron.

The 2 starred together on Descendants 3.

But it seems that more than that, the pair were actually close friends, too.

She shared a video series in honor of the star - and it makes for incredibly heartbreaking viewing.

But it seemed that wasn't quite enough.

Dove is no stranger to an inking, and her latest is the most beautiful and sentimental yet.

In an interview with Vogue, she shared her latest tatt.

The tribute to Boyce is a symbol of the anti-violence sentiment she and Boyce shared. "It's sort of a nationally recognized symbol for peace and anti-gun movements," Dove explained.

"It was really beautiful, and I've been trying to think of a tattoo to get for him since he passed, and I just felt that this one was really appropriate," Dove went on.

And now another of Boyce's friends has offered another tribute.

Karan Brar was very close to the late star and has been instrumental in founding the Cameron Boyce Foundation since his tragic passing.

The 2 were very close.

And Brar has been missing his pal a lot. So he decided to commemorate their friendship ...

It was inspired by this cute photo.

He wrote on Twitter, "a photo of Cam & I the day before his 19th birthday."

The tatt also included "part of a letter he wrote to me on my 15th birthday." So cute.

It's absolutely gorgeous - and such a wonderful tribute to a great man. "HUGE thank you to @unotattoonyc for doing such an amazing job- you are a legend my friend," Brar finished.