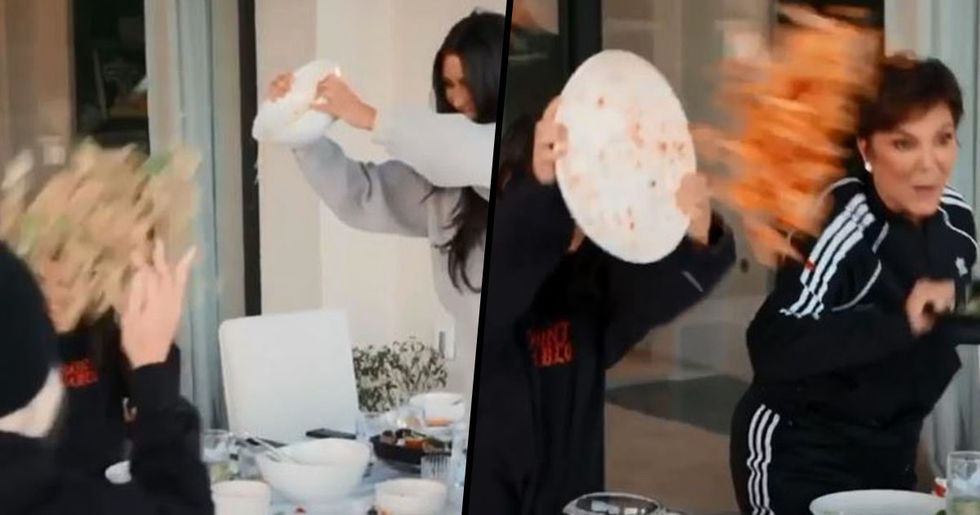 Kardashians Branded 'Shameful and Disgraceful' for Having Food Fight

The Kardashians have never shied away from controversy. In fact, without it, it could be argued the sisters wouldn't even have careers today. Whether its foot-in-mouth moments, surgery claims, love hectagons, or cultural insensitivity, the family thrives by making people feel angry.

But their latest divisive move might have had the least positive reception yet. While filming an episode of KUWTK, the family starts a gigantic food fight. While they probably thought it was all in good fun, fans have been critical, claiming its representative of their problematic attitudes overall.

They've all been under fire for their shilling of sketchy diet products. And the fact they all have so much cash has landed them in hot water yet again.

Because their latest controversy?

Well, it seems to stem from the fact the family is just out of touch with the average person - to the extent of being actively offensive.

It all stems from seemingly harmless fun.

A food fight. But it's the way the Kardashians portrayed it that many are taking umbrage with.

In the latest episode of KUWTK...

The family gathers at Khloe's house for a "civilized" lunch.

But, as we've come to expect with the Kardashians...

Things quickly descend into chaos - and an enormous food fight breaks out.

The video shows (pretty much) all members of the family enthusiastically pelting one another with food and drink.

The cause of the fight seems unclear.

But what is clear? The family is absolutely brutal when it comes to throwing dishes, of what looks like, delicious food over one another.

They don't hold back.

But Khloe is not best pleased. In fact, she almost acts as the voice of reason concerning the fight - and her views seem to have been echoed by the online community.

Khloe was deeply perplexed by the scenes.

"You messed with the wrong b***h Kris Jenner. If anyone's comfortable with this I'm gonna question them. This is no way to live."

And it seemed others agreed.

Because the comments on the Instagram post have been anything but complimentary - with the vast majority not seeing the funny side.

Many thought the wasting of food was disrespectful.

While it also showed just how little value food has to the family - while many around the world struggle afford to even put food on the table.

Do you think the Kardashians have gone too far?

Or do you think people need to lighten up and not take things so seriously? Either way, the Kardashians have achieved notoriety yet again! Want more Kardashian controversy? Scroll on to find out why everyone's talking about Khloe's face.