'Karens' Have Had Enough of Being Called 'Karens' | 22 Words 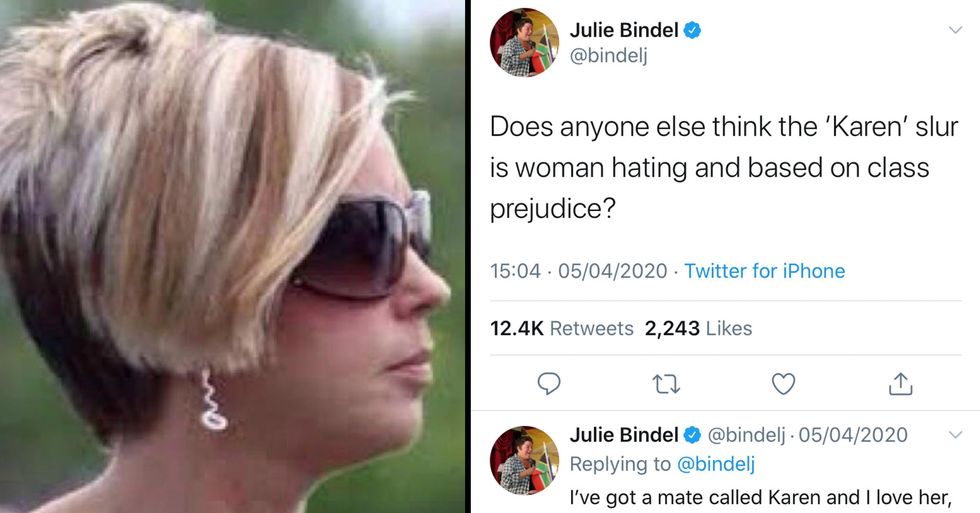 'Karens' Have Had Enough of Being Called 'Karens'

As good as the Karen memes are, it seems that "Karens" have now had enough of being called Karens.

We are living in a generation of memes...

And it sure as hell has been a good one!

But one of the best memes of all time?

The "Karen" meme, of course.

This meme has nothing at all to do with the famous Karen from Mean Girls.

So what exactly is a Karen?

A Karen has a certain type of look...

It really is the most stereotypical meme out there.

Many people have now been identified as a Karen...

Some of the memes are comedy gold...

For those of you who aren't up to date with the current internet memes, the name "Karen" has become associated with a certain type of middle-aged white woman who’s likely to throw a fit if she doesn’t get her own way.

But we aren't complaining!

We can now spot a Karen asking for the manager a mile off!

There is a whole range of Karens out there...

Including the notorious anti-vaxxer community.

Who remembers when Storm Karen took over the internet last year?

The memes came out in full force over this unfortunate tropical storm name.

People seemed very unconcerned with the prospect of an actual storm...

And, instead, seem intent on coming up with the best memes and jokes over Storm Karen's hunt for a manager, asymmetrical blonde wigs in full force.

People were saying the same thing...

That Storm Karen obviously wants to speak to the manager... Duh.

Some came up with stunning visual graphics...

Okay, this storm looks simply terrifying. I wouldn't want to be the manager of a store for this one...

Storm Karen isn't one to be reckoned with...

The meme Gods have answered our prayers.

I was honestly feeling a bit lost after the whole Area 51 fiasco...

All good memes will eventually cause some offense, and it seems that Karens themselves aren't at all impressed.

It didn't take long for people to start criticizing the meme...

Does anyone else think the ‘Karen’ slur is woman hating and based on class prejudice?
— Julie Bindel (@Julie Bindel)1586095496.0

Including British journalist Julie Bindel, who asked her Twitter followers: "Does anyone else think the ‘Karen’ slur is woman-hating and based on class prejudice?"

And the "Karens" themselves came out in full force to slam the slur.

Many believe that using the Karen meme is offensive to women...

@tweetertation That "Karen" is even a concept is about policing women for having the audacity to exert whatever rig… https://t.co/ECc1wfpqvR
— Katrina Gulliver (@Katrina Gulliver)1581773221.0

And it doesn't allow people to consider the concept of a woman being right in something.

This Twitter user made the bold claim that the meme was actually created by black women.

She explained: "To talk about white women’s interpersonal and state violence against us and our communities: calling the police on us for getting coffee, threatening to have us fired, talking down to us at work (where we’re now 'essential')".

Things then moved onto the workplace...

@bindelj My understanding is that the Karen/Sally/Linda thing was started by Black women as a way to address racial… https://t.co/Mt7kaH45lf
— Sister Outrider (@Sister Outrider)1586098452.0

"My understanding is that the Karen/Sally/Linda thing was started by Black women as a way to address racialized dynamics in the workplace - whether Karen is the racist manager or the middle-class customer with nothing better to do than belittle people on minimum wage," this Twitter user stated.

People are deadly serious about this...

@ClaireShrugged It is certainly used by enough white men for it to be morphed into a misogynistic slur. Also, those… https://t.co/LzY2WMDZzV
— Julie Bindel (@Julie Bindel)1586098661.0

And many are furious that men now use the meme as a "misogynistic slur" against middle-aged women.

So it seems that Karens have really had enough of being called Karens.

@tweetertation That "Karen" is even a concept is about policing women for having the audacity to exert whatever rig… https://t.co/ECc1wfpqvR
— Katrina Gulliver (@Katrina Gulliver)1581773221.0

Only time will tell to see whether this backlash will encourage people to back off from using the meme or not... We'll see.