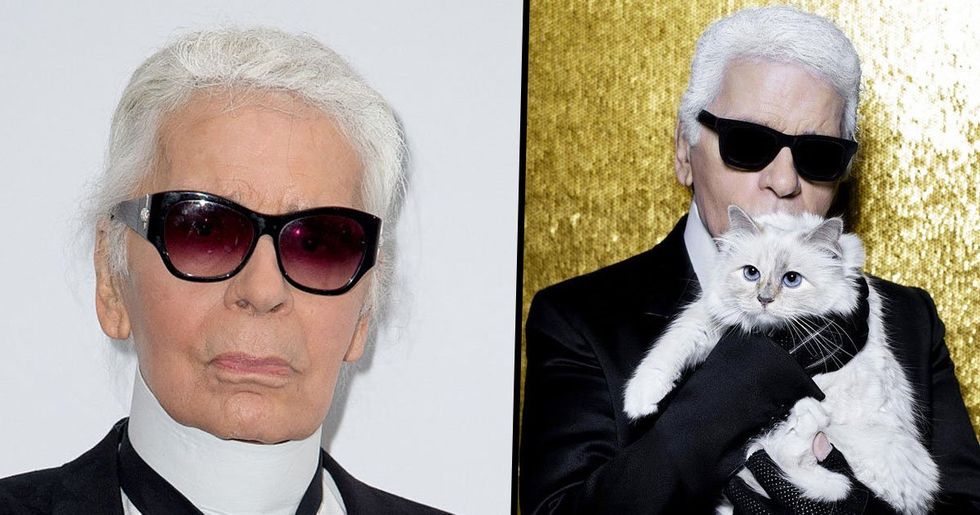 The world of fashion can be a strange place. You can go to a fashion show and watch the outfits being strutted down the catwalk with nothing but confusion on your face. It even makes you wonder who could create such strange and beautiful designs. In some cases, the answer was Karl Lagerfeld, who was once recognised as the acclaimed creative director at Chanel. Recently, the fashion icon passed away at the age of 85, leaving the industry heartbroken and mourning the loss of such a legendary figure. Lagerfeld’s sudden loss has also left many wondering – what will happen to $200m fortune? Well it seems that Lagerfeld, who died without children, had already thought of this. And the answer is kind of amazing.

Karl Lagerfeld was a legend.

Changing the face of fashion, he will always be remembered as a genius within his field.

He truly was an icon.

Something that can never be questioned.

However, there was someone just as recognisable.

You may find it hard to believe, but Lagerfeld’s cat, Choupette, is also a recognised figure within the fashion industry.

In fact, the cat is even on social media.

Even though she is only a cat, Choupette can boast 120,000 Instagram followers.

She even has a blog!

Choupette’s many antics are also heavily documented on her blog, which is run by digital marketing expert, Ashley Tschudin.

And it seems Choupette’s life isn’t going to change.

Although her owner has now passed away, it appears that Choupette will continue to live in the lap of luxury.

Because she may just be the heir to his fortune.

According to French magazine, Le Figaro, Choupette may be entitled to Lagerfeld’s fortune under German law.

Lagerfeld even spoken about the prospect during his lifetime.

In 2015, Lagerfeld famously stated that his fluffy friend had “Her own little fortune, she’s an heiress."

Which just goes to show how much he loved this cat.

And that wasn’t the only time he addressed the matter.

Because he spoke about it, quite a lot.

In 2018, Lagerfeld addressed the matter again. His answer was “Among others, yes". Again implying that Choupette will receive some of the fortune, along with other loved ones.

In 2013, he even spoke about marrying the feline if it were legal. Not sure how I feel about that statement, but okay.

Here’s the direct quote if you don’t believe it.

"There is no marriage, yet, for human beings and animals. I never thought that I would fall in love like this with a cat."

As of yet, there is no word on who will care for Choupette.

Now that her beloved master is gone, Choupette will need to be taken care of. Although, as of yet, no one has been singled out.

Some believe it could be another one of Lagerfeld’s muses.

Male model and muse, Brad Kroenig, has been rumoured to be getting the cat, along with his son Hudson, to whom Lagerfeld was godfather.

Meaning that Choupette will definitely be cared for.

And Choupette doesn’t expect too much.

At least, I don’t think she does.

But how do you feel about Lagerfeld’s decision.

I mean, it can’t be every day that such an amount of money if given to a cat, can it?

Well, turns out its more common than you may think.

However, there are some issues with this.

In the UK, leaving money to pets isn’t that easy. As animals they cannot actually own money and therefore some precautions have to be taken.

"A cash gift left directly to a pet upon death will fail as animals cannot own cash or legally receive an inheritance."

But this can be rectified.

"The Executors/Trustees of an estate can however hold money assigned to pets on trust with the direction that the money is used to pay for the pet’s care, maintenance and other expenses."

Most the time, the owner just wants to ensure the well-being of the pet.

Ugbo has dealt with many cases where the owner simply wanted the pet to be cared for after their death, leaving them money to do so.

And I’m sure that’s all Lagerfeld wanted.

The fashion icon truly adored this cat and just wants to make sure she is loved and cared for in luxury now that he has gone.

And I’m sure many of Lagerfeld’s friends would be happy to have her.

After all, she was basically his wife.

Let’s hope she finds the home she deserves.

Losing her owner must have been hard, and I’m sure we are all hoping she will find a new home soon.

At the age of 85, the fashion icon died due to complications with pancreatic cancer.

He will always be remembered by the industry.

As a ground-breaking member of the fashion world, it is safe to say that he will be remembered for years to come.

Is Lagerfeld honouring his beloved pet, or is he insane leaving that amount of money to an animal?

But it does prove how much he loved the cat.

And just how much she inspired him in his life and in his work.

Our thoughts are with Choupette and the rest of Lagerfeld's loved ones.

They truly have lost an inspirational and caring force in their lives.