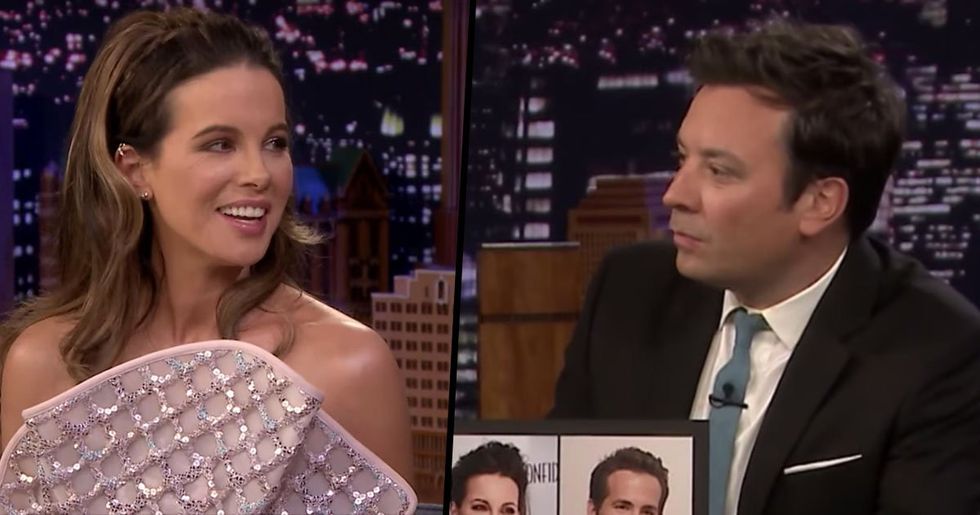 Often people are told they look like celebrities, but what we don't always see is celebrities taking to national TV to say how much they look like a fellow A-lister. Well, that's exactly what British actress, Kate Beckinsale did this week.

The star appeared on Sunday's episode of Tonight Show With Jimmy Fallon and told the host that she believes she looks exactly the same as actor, Ryan Reynolds, and even mistakes him for herself on movie posters. Yep. Sounds like quite an unconventional pairing, but just wait until you see the side by side...

Keep scrolling to see the snaps of this uncanny resemblance. But first, here's another rather strange lookalike... female Hugh Jackman and Blake Lively...

He started his ongoing role as the superhero in the year 2000. He reprised the role many times, but ended his alliance with the character in 2017's Logan.

He's another actor, but this time of Canadian origin. Reynolds also has credits as a comedian, screenwriter and film producer.

Reynolds is best known for his role in the Deadpool franchise, in which he plays the title character.

And we have Blake Lively.

She's an actor too - but this time, American in nationality. She's one of Hollywood's favourite leading ladies, thanks to her stunning looks, comic timing and badass attitude.

Lively is best known for her performance in Gossip Girl.

Her role as brat with a heart Serena Van Der Woodsen in the hugely popular and long-running teen series is where she truly became a household name.

Lively also has an impressive range of films.

She starred almost solo in epic shark battle, The Shallows. She also worked alongside Anna Kendrick in 2018's A Simple Favor, which was widely critically acclaimed as a genre-bending riot.

Lively and Reynolds are married.

The pair met while filming Green Lantern in 2012, and got hitched in 2012. They have two children together, four-year-old James, and two-year-old Inez.

They're also the definition of couple goals.

Look at them! Here they are posing together at the Met Gala, and frankly looking like they're having an absolute ball doing it.

Jackman and Reynolds are in a relationship of sorts, too.

They have on ongoing love/hate Twitter battle, where the pair roast each other for all manner of things, much to the delight of their fans.

Reynolds and Jackman are known for their Twitter feuds.

Reynolds tends to be the instigator, essentially trolling Jackman at every available opportunity - like this celebration of success, which he quipped was likely actually protesters, rather than fans.

No on is safe from Reynolds' trolling.

Not even his wife, Blake Lively. Here, he wished her a happy birthday in a pretty unique way - by essentially cropping her out of her own celebration post.

Although Lively gives as good as she gets.

She got her revenge on Reynolds' birthday, when she posted a picture of him with another famous Ryan - Ryan Gosling. The two are often mixed up, which Lively played on to hilarious effect.

Jackman takes pride in getting his own back, too.

In this iconic Instagram prank, Jackman (along with Jake Gyllenhaal) told Reynolds that a party he was attending had an ugly Christmas sweater dresscode - when actually no such code was in place.

How we love sassy celebrities.

And we're so glad Twitter and Instagram exist to allow us an insight to the daily LOLs of this famous gang.

But this latest development didn't even require involvement from the trio.

This is some of the serendipitous trolling the internet has ever seen - Jackman didn't even need to say anything to totally roast Reynolds.

Although, funny as it is, it's also a little bit awkward.

Awkward as in, Reynolds appears to be (at least subconsciously) attracted to his pal, and the guy he constantly tries to make fun of online.

And his response was as hilarious as you'd expect. It's not every day you realize you've essentially married your best friend's lookalike.

We bet Jackman is thrilled by the whole thing.

It's a perfect way to get his own back against Reynolds - and better still, he didn't even have to do anything to achieve it!

However, some remained unconvinced.

Some internet users commented that they couldn't see the resemblance between the female Jackman and Blake Lively.

Others noticed something else.

Some thought the real Lively lookalike resided in the female version of Reynolds - meaning that he'd essentially married himself!

We're not too sure what to make of all this.

While the female Jackman has a look of Lively about "her," we're inclined to agree that the stronger resemblance is between Lively and her real life husband's female form.

There were some other gender-swaps worth noting, too.

Some drew attention to this creepy Benedict Cumberbatch "female." (Just FYI, this one's a joke - it's a picture of the character he played in Zoolander 2).

Another actor caught the attention of some.

The "female" version of Tom Hiddleston is, like, exceptionally beautiful. Some pointed out "she" looked like a long lost Olsen twin.

There was an uncanny resemblance in Reynolds' counterpart, too.

Twitter users were quick to point out how much the female Reynolds looked like pop-country star Sheryl Crow. This one, we can really see.

These images are pretty confusing in general.

Either way, we're a fan of this news.

It's not every day we get to see a real-life existential crisis play out online. Just kidding - we're sure Reynolds has enough of a sense of humour to take this (mostly) in his stride.

He's found himself at the center of his own lookalike confession.

British actress, Kate Beckinsale has said that she thinks she looks the exact same as the actor.

And she's taken to national TV to prove it.

She appeared on Sunday's Tonight Show With Jimmy Fallon.

She told the popular host about the uncanny resemblance between her and the legendary actor. "I look exactly like Ryan Reynolds. Like, in a shocking way," the star explained.

She even admitted that she gets confused when she sees movie posters featuring Reynold's...

Yep, she genuinely can't always tell the difference between herself and the forty-two-year-old heartthrob.

Fallon then proceeded to show viewers a side by side image of the pair.

And we have to admit, they do look a bit alike.

What do you think? Long lost twins or nothing alike?

Fallon didn't seem so convinced though...

But Beckinsale remained unchanged on her stance. "He's like a big Canadian man, and I really see myself in him."

After the show aired, people said they "couldn't unsee" the pair's strange resemblance.

Minds are well and truly blown.