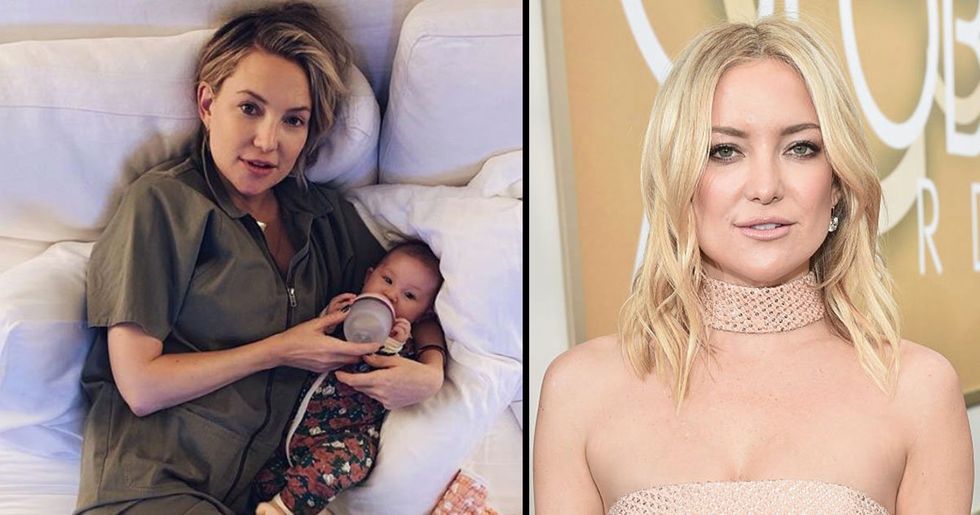 Stories about a pregnant transgender man, shocking #10YearChallenge photo of Caitlyn Jenner and LGBT+ accomplishments in their fight for equality and freedom of choice have really made people question whether the way we raise children today could be improved.

Young couples across the world are choosing to raise their children as gender neutral rather than pushing gender stereotypes onto them. In other words, between the options of "pink" and "blue," they go with both, hoping to raise stronger, confident individuals.

Science seems to support such approach. But there are so many people, even among celebrities, who believe this could cause more damage and confusion than help the children.

One of the latest celebrities to join the movement is Kate Hudson who recently welcomed her third child and first daughter Rani Rose.

As strange and uncertain as this new parenting style sounds, these parents have pretty good reasons for it.

For hundreds of years it's been natural to raise your child as either a boy or a girl, so the concept of "gender neutral baby" is confusing, to say the least.

As Telegraph notes, parents who have already raised perfectly fine children as either boys or girls tend to think of extremes when they hear about the concept: "Children not being told what sex they are, banned from playing with the toys they crave, and dressed only in grey or khaki babywear."

A lot of celebrities have gone with the gender neutral upbringing for their children, such as Paloma Faith.

Even John Lewis is planning to stop labeling their childrenswear as "boys" and "girls."

According to Telegraph, a study in the Journal of Adolescent Health found that strict gender expectations might increase the children's risk of developing mental and physical health problems during adolescence and afterwards.

Then there was another study in the Journal of Experimental Child Psychology.

They found that children in a gender-neutral kindergarten in Sweden had access to more opportunities, which might mean they'll be more successful adults.

BBC had a documentary in 2017, called No More Boys and Girls: Can Our Kids Go Gender Free?, which followed a class of seven-year-old children who are identified as boys and girls.

They noticed that the girls would call themselves pretty but also had lower self-esteem. Boys tended to have a more limited vocabulary when talking about their emotions.

However, one personality psychologist, Dr Stella Mavroveli, believes that both sides of the gender neutral upbringing debate tend to go to extremes, Telegraph reports.

She said, "We have to accept that there are physical and psychological differences between men and women, and while as parents we need to allow our children to flourish and develop in an environment that is not too prescriptive, we do tend to gravitate towards the extremes, as of late." "I wonder whether we will end up with children who are even more confused and fixed in their opinions and choices."

Telegraph also says children might just be copying their parents' behaviors, rather than societal stereotypes.

"Kids love to emulate adults," agrees Elizabeth Davies, founder of The Mummy Coach, a personal training service for mothers. "They love playing with mini-kitchens and pushing tiny buggies around because they see us doing those things."

Actress Kate Hudson has recently joined the club of the gender neutral parenting.

ABC News reports that Hudson announced her plans to raise her daughter Rani Rose as gender neutral, saying that "we still don't know what she's going to identify as."

AOL asked Hudson if raising a daughter was different than raising her two boys, to which she replied, "It doesn’t really change my approach, but there’s definitely a difference."

"I think you just raise your kids individually regardless - like a genderless [approach]," she added.

"I will say that, right now, she is incredibly feminine in her energy, her sounds and her way. It’s very different from the boys, and it’s really fun to actually want to buy kids’ clothes."

But ABC News also reports that genderless parenting approach is not just a celebrity trend, but it's been noticed among regular American families.

They say experts have told GMA that there has recently been an increase in popularity of gender neutral names given to babies.

Irish Examiner reports that Hudson plans to allow Rani Rose to choose her own identity as she grows up.

She's actually going to raise all three of her children as individuals, rather than by some pre-determined gender labels.

Hudson herself was the only girl in a group of brothers, which she believes helped her see the fluidity of gender roles, People says.

She says she was "a tomboy in a spinning dress" as a kid.

“My middle brother [Boston Russell], who is closest to me in age, was basically my sister because I put makeup on him all the time, and I’d dress him up and he loved it."

“But growing up as a girl with all boys, you end up with a thick skin. You really do."

“People say, ‘Oh, your brothers must’ve really protected you.’ And I’m like, ‘They threw me right into the fire!’" Hudson added.

However, actor Kurt Russell says that her parenting approach was different when she raised her two sons, People reports.

“She’s a little different with the little girl, I think at this stage, than I remember her being with her boys [at this age]," he said.

“We’re really glad that she got [a daughter] and had an opportunity to have her."

He also added, “We’re proud of Danny and the relationship that grew between Kate and Danny, the result being Rani Rose."

"With the boys it was just like onesies … actually, I did pretty good with the boys," Hudson said about the difference in her parenting style, according to Fox News.

"But with her it’s a whole other ball game. There’s some stuff that I’m like, 'I can’t do that to her, because it’s so over-the-top.'"

Daily Mail reports that Luisa Zissman has shared that she believes Hudson's genderless approach is a mistake.

She claimed on Instagram that Hudson was only trying to be "fashionable."

She re-posted a picture of Hudson and her daughter, asking "what is the world coming to?"

Zissman captioned, "Oh I know how to f**k with your kids head. Raise them with no identity, no gender, let them be a nothing. Because that’s a really secure nurturing thing to do for a child."

"Who cares if you f**k up your kids head, at least your being fashionable #whatisthisworldcomingto #SHESagirl," she added.

Zissman herself is a mother of three daughters, Dixie, 8, Indigo, 2, and Clementine, 15 months.

One of the moms she interviewed was a Stockholm local Miranda - an LGBT activist with a two-and-a-half year old child.

Sweden, in general, seems to be the most advanced country of us all when it comes to social rights.

According to VICE, Swedish government hands out Chimamanda Ngozi Adichie's We Should All Be Feminists to every 16-year-old in the country.

It also encourages Swedish fathers to take 90 days of paid leave off work for every baby they have.

Sweden even has the first gender neutral pre-school, Egalia, which was opened in Stockholm in 2010 and is funded by the municipality.

Beck Laxton and Keiran Cooper live in the UK. They have appeared in the media and had a blog about the topic for a while.

But turns out, they never wanted all of that attention. (Can't be the "fashion" thing, then.)

On her blog, Beck Laxton has written that the couple got "accidentally splashed all over the media after innocently giving an interview to a friend of a friend who was working for Cambridge News" in January 2012, VICE reports.

Dani, from Kent, is another stay-at-home parent with a five-year-old who identifies as agender.

So VICE talked to all of these parents about what it's really like to raise a child gender neutral.

Two of them didn't actually see why their approach was seen as radical.

"My ideas on gender were already part of my life before I gave birth, so that was just an extension of what I believed and practiced," Dani explained.

Miranda said that she "sees it as a basic feminist notion to believe we're all limited by gender roles and the expectations that go along with these roles."

Dani later added that "gender neutrality is not about finding a gender neutral middle but about offering a child the option to [be] whoever they want to be – without feeling obliged to choose blue over pink."

"We love all colours, we love the rainbow. The world is colourful."

"Whether my child wants to wear a something pink or a shirt with superman on it, it's all fine," Miranda explained. Her family was very respectful of her decision and tried to always address her child the right way. "The world is changing and adapting to new gender concepts – it just needs time to catch up," she concluded.